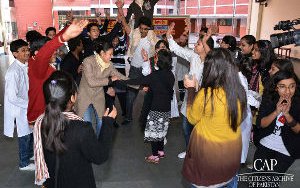 Anam Zakaria is a young woman who is spreading the message of peace in Pakistan and beyond. Recently we met to discuss peacebuilding in South Asia.

I have learned a lot by knowing about other peacebuilders, most obviously people such as Nelson Mandela and the Dalai Lama, but others as well. And I believe that others can too. Stories of peace should be shared more often, to generate hope in contexts affected by conflict, such as South Asia. So I am delighted to present an introduction to Anam Zakaria and her peace work.

Anam holds a deep interest in issues of peace and conflict in South Asia. Since 2010, she has been involved with development and research work in Pakistan. She has worked with the Citizens Archive of Pakistan, documenting oral histories of the first and second generations of Pakistan and using first-hand accounts to promote tolerance and critical thinking among school and college children. This work led to a book, due for release this year, on the changing narrative of Partition and the understanding of the 'other' in Pakistan.

Currently, she works with the Association for the Development of Pakistan, leading their education sector projects while teaching Development Studies at Headstart School, Islamabad.

It was back in 2010, when I launched CAP's Exchange-for-Change project - a programme connecting Pakistani and Indian school children - that I became a first-hand witness to the animosity breeding in the country against what had become the 'other.' On the streets of Lahore at this time, posters plastered on rickshaws openly asked Bharat ke saath rishta kya? Nafrat ka, intikam ka (What is our relationship with India, but that of hatred and revenge)!

Inside classrooms Anam saw students emulating the same sentiments. Without ever meeting the 'other,' children as young as 9 and 10 in Pakistan and India harboured negative stereotypes, seeing the other as mischievous, treacherous, fundamentalist and fanatic. What startled her the most was that these sentiments had become widespread, cutting across low, middle and high-income school students.

A child to whom she gave a Hindu deity, in an upper middle class school in Lahore, began to cry. Her eyes had sinned, she said, and now she would go to hell. A student aged 6, from a high-income school in Mumbai, ran away from her when Anam told him she was a Pakistani. He was scared of Ajmal Kasab - the terrorist who was captured and killed for participation in the 2008 Mumbai terrorist attack - and said tat he had heard all Pakistanis were fanatics.

According to Anam, the experience of working with young children showed her the dangers of tomorrow. If such notions were not challenged, if children did not understand how to tolerate or appreciate difference, they were destined to become hardliners as adults. Violent episodes like the Mumbai attacks of 2008, the Gujrat riots, and the Gojra massacre were only going to become more prevalent.

These incidents triggered in her a powerful urge to challenge stereotypes and promote a better understanding in children about their shared history, and, in doing so, prevent intergenerational mistrust from sowing further seeds of hatred.

Reflections from a visit to India

During my childhood, I heard terrifying stories of Hindus from my grandmother, who witnessed the bloodshed of Partition. While India continued to fascinate me due to the Bollywood movies and TV shows I grew up watching, I always looked at it with suspicion. In fact, I was almost too scared to cross over as a child. Stories of Sikh- and Hindu- instigated violence would cloud any desire to explore what was on the 'other' side.

Anam’s own childhood perceptions of India and Hindus were changed following a visit to India in 2012. No longer was India an “elephant” looming on the 'other' side but a place where she could find delicious vegetarian food and make exceptional friends. She said that, “Of course, so many aspects of our culture - food, clothing, language, humour - were almost identical. However, perhaps what fascinated me most was how similar our historical experiences had been and how much Partition had taken away from India and Indians. Whereas I had mostly contemplated our loss and misfortune until then, I started to see the longing so many people in Delhi had for the homes, lives and friends they had left behind in Pakistan”.

For her, it was strange to see an Indian connect so deeply with Lahore. For them to ask her to speak to them in Urdu for they had lost their father or mother and with that had lost that part of their culture too. How so many of them wanted her to sketch out Government College and Lawrence Gardens in Lahore, where their parents had spent some of their fondest days. It made her realise how much common ground there is between the people of both countries.

From early in her career Anam has been able to reflect on her commitment to peace work. This is manifested through the Exchange for Change program between India and Pakistan, and later between USA and Pakistan. Anam launched both initiatives.

Exchange for Change gives students a platform to exchange questions, thoughts and ideas through letters, photographs and recorded interviews. At the end of the exchange, a small number of students get a chance to travel to the other side to meet the friends they have made over a 16-month period. The impact such programs can have is phenomenal. Anam says, “I believe such micro-level initiatives have the power to bring instrumental change in perceptions and help challenge the mainstream discourse in society”. Here is an article that she wrote on her Exchange project between India and Pakistan.

Through her research Anam has tried to explore how Partition and the 'other' are understood through the generations. What she has increasingly found is that the multi-cultural identity and inter-communal relationships shared by the Partition generation have a shrinking space in Pakistan today. For many the distance from 1947 has allowed many people in the youth to 'move on,' forget the bitterness of Partition and build fresh relationships with India - and the recent rapprochement efforts have been helpful.

However, for others, the animosity is maintained, and new hatred is bred not only because of what they learn inside and outside of school, but also because of filtered oral histories they receive. She has spoken to psychologists that state that when individuals undergo a traumatic event, other memories and experiences recede to the background. Thus, for many people in the Partition generation, they have pushed behind the fonder memories of the pre-Partition days. The micro narratives have been consumed by the meta narrative of society and many people have personalised stories of general violence and trauma.

Her own grandmother had only spoken to her of the murders and tortures of 1947, even though she had not lost a single-family member at Partition. It was only after a lot of probing that other stories started to come out - of her Hindu friends Rajeshwari and Ummah, and of how her sister was saved by a Sikh family. It is important to share such positive stories. Anam continues to do that, and this is an important contribution to peacebuilding through peace research.

Youth plays an essential part in promoting peace because though children are very impressionable, what they learn in their childhood converts into rigid opinions by early adulthood. According to Anam, “If they [children] learn that Hindus and Muslims can never be friends, that non-Muslims are treacherous and mischievous and Hindus and Sikhs are alone responsible for the violence of Partition, they will only learn how to de-humanise the 'other' and carry an incapacity to tolerate diversity in adulthood”. At the same time, she has seen that if children are taught to think critically and given information to challenge stereotypes, the results can be tremendous. In my opinion, Anam’s work is very important because through her work she is spreading hope for peace in South Asia, which is dominated by rivalry between the nuclear powers.