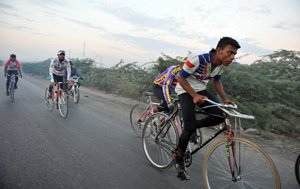 Chugh: Can you tell us a little bit about how Pakistan Calling as an effort, and as an initiative, started? When was your "ah-ha moment," when you decided to come up with something like the project?

Akhtar: I think there was no "ah-ha moment." There was a group of British Pakistanis who were getting increasingly frustrated about the failure of engagement with institutions — and how you had all this activity in the British Pakistani community around supporting health, education, the work of Islamic Relief, the people involved in The Citizens Foundation, and right the way through to pensioners that send money to the Edhi Foundation. And yet there was this huge, almost divide, or ceiling, where the British Pakistani community just didn't have a presence in the work of think-tanks and international policy networks. Given the issues and the fact that the diaspora community has understanding and levels of access on some very difficult issues, there was a feeling of a missed opportunity…

So, our origins were partly about the need to start raising awareness about the work that is done around health, education and development — and also that Western diaspora communities can bridge trade, economic development, and global networks in the West and developing South Asian communities, and do things around working in health and education that maybe other NGOs cannot do.

There was also a genuine anger about minority rights issues. What was happening in Pakistan around the minority communities was awful. People needed to speak up. Partly, one of the reasons The Samosa was set up was to work with the Human Rights Commission of Pakistan and raise issues about the persecution of Hindu communities and Christian communities. And with the British Pakistani community, because many of them have got very deep roots in the villages, the Punjab and Kashmir, their voices would have a bit of weight.

So partly, Pakistan Calling is about opening up some of these issues regarding working-class access to the arts, media, journalism and international relations. One, because of social equality; and two, because it's a no-brainer that engaging the diaspora is a good thing. That is changing with my generation. I think Pakistan is a complicated country, but I'm not going to say it is the bad press. It is a complicated country and part of understanding this complexity is to engage the diaspora. I will go right back to what I said about our parents' stories of partition: the narratives of migration and the narratives of working-class diaspora stories that are in Pakistan Calling. There are lots of films of British Pakistanis and their connections to Pakistan.

Read the full interview at Fair Observer and visit Pakistan Calling to view all the films in the project.

The RSA and The Samosa launched Pakistan Calling a film project to challenge perceptions of today's Pakistan and to promote constructive cross-cultural dialogue between Britain and Pakistan. The films depict Pakistani civil society organisations, social entrepreneurs and individuals who are attempting to tackle the country's many pressing social problems and the many links between Britain and Pakistan. You can read reviews of Pakistan Calling's on the BBC, New Statesman and Sluggerotoole.