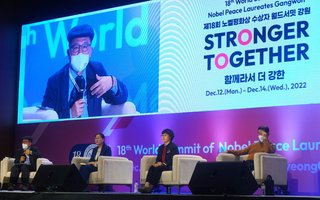 2023 marks the 70th anniversary of the Korean Armistice Agreement. It also marks over 73 years of uninterrupted conflict in the Korean Peninsula.

The Agreement ended the Korean War of 1950-3. But it did not end the hostilities between North and South Korea, and a peace agreement has never been achieved.

Running from 12 to 14 December 2022 under the motto “Stronger Together,” the Summit was held at Pyeongchang, South Korea, in an attempt to promote peace talks in the Korean Peninsula. It is a place that, as the President of the Nobel Peace Secretariat, Ekaterina Zagakldina, said, “has great significance for this unfinished war, as well as many other ongoing wars, which are the world’s open wounds that we all want to finally heal.”

In the recent past, Pyeongchang hosted the 2018 Winter Olympics, one of the most critical moments of détente between the two Koreas. Now, it has given space to the Summit in the hope of relaunching a peace dialogue with North Korea, which continued its barrage of missile tests in December and, for the first time, launched a missile that landed close to South Korea’s territorial waters. 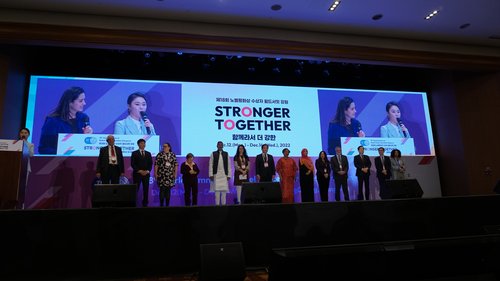 In his lesson on peacebuilding, Steward summarised his diplomatic experience as a constant effort to “breakdown stereotypes, to get inside the skin of the people on the other side. Once you have a better understanding of that, I think you will find it easier.”

With this desire for knowledge and understanding, attendees visited the Demilitarized Military Zone (DMZ), a 4km wide and 250km long buffer zone that divides the peninsula in two.

The highly fortified area was established by the 1953 Armistice under the supervision of the United Nations and allies of the two sides, with the hope of fostering a constructive dialogue, which has not yet reached a formal peace treaty.

“In the world, hundreds of millions of people live […] close to borders,” noted Kailash Satyarthi, who won the 2014 Nobel Peace Prize for liberating child slaves in India. “I feel that the creation of borders […] was the biggest human error in the history of the idea.”

Out of almost 10 million households initially divided by the DMZ, only 45,000 are still alive today. In addition to the pain that never subsided, it is a historical memory that must be faced to carry out a reconciliation process.

Still, there may be hope for change. According to the Hankyoreh Peace Institute’s Director, Cheong Wooksik, climate change could be an opportunity to reunify the Korean peninsula. The idea is based on the simple observation that “there are no natural barriers between the two Koreas,” so an environmental disaster could have a devastating impact on the whole peninsula. Perhaps more extreme even than an atomic bomb.

Specifically, for Dr Yoon Jung Sook of Green Korea United, it’s about conserving biodiversity in the Taebaek mountain range, the backbone of the peninsula.

Rampant deforestation caused by drought would represent a humanitarian catastrophe much greater than the risk of a nuclear conflict. Therefore, as the fear of nuclear escalation ended the Cold War, such a natural threat could deter the arms race between the two nations.

“Yet, although it has been in the national plan for 15 years”, Jung-Ok Lee, Former Minister of Gender Equality and Family of South Korea, says, “the government has not yet taken the necessary steps to bring ecological détente to a successful conclusion.”

Just this year, South Korea increased its defence expenditures by 4.6%. The budget rise cannot be explained solely by the ongoing military escalation with North Korea. Rather, the war in Ukraine has pushed some NATO members to secure military contracts with Seoul.

At the same time, with a carbon footprint of 11.89 tons per capita, South Korea is one of the most polluting countries in Asia. “We must work towards cooperation with developing countries, including the People’s Republic of Korea,” says Jung-Ok Lee. In a globalised world, “we cannot enjoy national security without global security.”

But political will is not the only impediment to peace in the peninsula. Many South Korean youth are not motivated by the prospect of reunification.

“I will be pragmatic,” said a young Summit attendee who had visited the DMZ a couple of days earlier, “I don’t believe that reunification is possible. They are too different.” 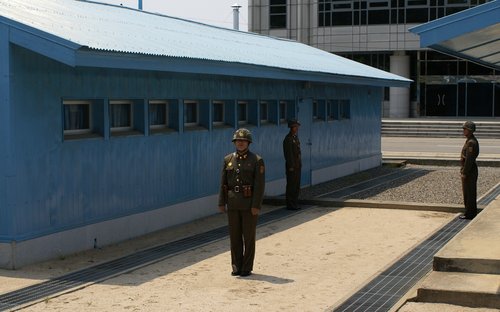 The North Korean side of the DMZ on the Korean peninsula, 2011. Credit: Roger Shepherd, via Flickr.

Yet, Cheong Wooksik highlights, “The same young people who are sensitive to the climate crisis are [military-minded]. We should discuss it.”

The separation between an older generation that sees reunification as a “national mission” and a youth that wonders if it is worth the economic effort is perhaps unsurprising. After all, as David Steward noted, there has never been a historical memory process: “There are no memorials, no monuments. There is no place to grieve.” And with families disappearing, so does memory.

Of all the youth attending the Summit, very few had the opportunity to meet with North Koreans; maybe just Susie, a young athlete who took part in the pan-Korean women’s ice hockey team at the 2018 Olympic Winter Games. Initially shocked and unwilling to collaborate with girls who were hostile towards her, she admitted crying when it came time to part ways and leave.

According to her, the sport has, in fact, symbolically united young people in mutual respect, required for the “road to peace to be cleared again.”

In the hope that such peace and dialogue will return to Korea, Pyeongchang will host the next Youth Winter Olympic Games in 2024.

Children and youth Dialogue and mediation
Disclaimer: The views expressed in this article are those of the author and do not represent the views or position of Peace Direct.

More on Children and youth and Dialogue and mediation →