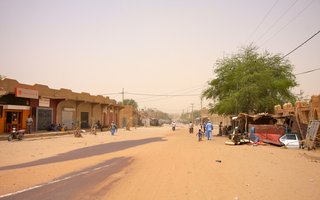 The socio-political and security context remains unstable, marked by increased uncertainty and discord since a second coup d'état on 24th May 2021 brought Colonel Assimi Goïta to power.

Despite the establishment of a new transitional government led by Mr. Choguel Kokala Maiga, President of the Strategic Committee of the 5th of June Movement - Rally of Patriotic Forces (M5-RFP) which contributed to the fall of the regime of Ibrahim Boubacar Keita, the current socio-political crisis continues to dominate the national scene despite a deteriorating security situation, which has been exacerbated by the ongoing health crisis. At the heart of these concerns are uncertainties on the progress of political reforms that are supposed to lead to the peaceful elections promised by the government.

Despite the establishment of a new transitional government led by Mr. Choguel Kokala Maiga [...] the current socio-political crisis continues to dominate the national scene despite a deteriorating security situation, which has been exacerbated by the ongoing health crisis

Although peacebuilders are not directly involved in political affairs, they are negatively impacted by the political crisis. Indeed, the suspension of many development programmes have affected most civil society organisations (CSOs), and local peace actors have not been spared. For instance, the World Bank suspended its financing for projects worth $1.5 billion as a result of the coup. "We have a project for the socio-economic reintegration of ex-combatants (PREC) for those unable to join the army and take part in the Disarmament, Demobilisation and Reintegration (DDR) process. The World Bank-funded project has been suspended since the August 2020 coup", said an officer at the NGO Greffa, a women's civil society organisation operating in the Gao region.

Also, the high-level political issues that led to the second coup d'état, as well as a tug-of-war between the government and the main workers' union, UNTM (Union Nationale des Travailleurs du Mali), have greatly reduced the ability of state services to ensure the security of people and their property.

A challenging security context that is not improving

Similarly, the unfavourable security context has hampered local peace actors in the North and Central regions of the country. Crime is on the rise, particularly in the regions of Gao and Mopti. This trend is visible through a proliferation of small arms and the presence of non-state armed groups near cities. "All localities in the Gao region have become dangerous. Localities like Boura, Ouatagouna and Tessit in the Gao region are the most affected", said an NGO worker in the area. He added that "moving around in the area is a major gamble. You can be attacked anywhere in these areas, sometimes even less than 2 km from the checkpoints of the Malian armed forces (FAMa) without the armed forces responding".

Many local peace initiatives supported by international organisations, such as Norwegian Church Aid (AEN), UN Women and GIZ (German Society for International Cooperation), are often suspended whenever an attack occurs in the local area. They only resume when and if calm is restored. “We CSO staff are sometimes accused of being spies for the West", said a member of the Observatory of Female Mediators in the Gao region.

In the Mopti region, specifically in the Koro, Bandiagara, Bankass and Douentza areas, peace outreach activities have suffered due to massive displacement of populations following deadly attacks

Increasingly, civil society actors in the North and Centre of the country are receiving death threats through text messages or phone calls, or are being kidnapped by non-state armed groups. "Some threats even come from the Malian Defence and Security Forces following CSO denunciations in the media or to their commanders", confided a programme officer in Gao.

It should be noted that over a year ago, Abdou Sekou Oulogueme, a member of the Centre for Humanitarian Dialogue, was abducted by armed groups in Mopti region, and disappeared without a trace.

How can CSOs adapt to the national context despite these challenges?

The capacity of CSOs to mobilise differs according to their areas of work. CSOs operating in conflict zones sometimes find it difficult to reach the communities they work with because of their lack of access to certain localities due to security reasons. Despite these difficulties, many of them know how to adapt or even reconcile their peacebuilding actions within established social customs, despite the volatility of the security context. The Association of Women Victims and Witnesses of Mali (AFEVITEM) has reached a level of 85% implementation of its strategic planning, as has Delta Survival, which has reached 65% of its programming in 2020. Gender issues are further taken into account by all CSOs. Civil society actors such as Women in Law and Development in Africa (WILDAF), the Association pour le Progrès et la Défense des Droits des Femmes (APDF), the Association des Juristes Maliennes (AJM), and the Groupe de Recherche, d`Étude, de Formation Femme-Action (GREFFA) focus more than 70-80% of their activities on women and girls.

Several CSOs in the central regions of Mali have been able to reach their target groups - women and youth in particular - and mobilise, despite travel restrictions. "Because of the ban on the circulation of motorcycles, our field agents use donkeys and ploughs. This approach has enabled us to mobilise our target groups", said Ms Diallo Tata Touré, director of the NGO ODI-Sahel. This is one of the strengths of local civil society actors.

Although most CSOs are involved in various dialogue processes, distinct dialogue approaches are often employed when it comes to engaging people in the security and justice fields.

On the one hand, CSOs often denounce human rights violations, sometimes committed by the Defence and Security Forces (FDS) and self-defence groups, which makes them much more likely to be the targets of intimidation and threats."We know that our security is at risk, but we cannot leave the people to their fate", said a field officer in the Gao region. This approach is mainly supported by Tabital Pulaku (an ethnically based Fulani community association), the Malian Association of Human Rights, Delta survie, GREFFA, and WILDAF. This approach had led to the mistrust of human rights organisations by security and judiciary actors. The second, more common approach is to have a 'constructive dialogue' with the SDF on their relations with communities and on weaknesses that need to be improved. However, it should be noted that peace dialogues at the local level in the Central Niger Delta has become increasingly difficult because of the risk of reprisals that peace actors face.

What can be done to improve the situation?

In view of ongoing socio-political, institutional and security changes, it is becoming increasingly imporant for the international community to provide the necessary support to CSOs in order to increase their skills and operational capacity, which will enable them to bring peace in the absence of effective state structures. A favourable security and political environment is a prerequisite for achieving this objective.

You can read other Mali articles here.

Boubacar Thera is Peace Direct’s Local Peacebuilding Expert in Mali. Boubacar is Programme Officer at the Geneva Centre for Security Sector Governance (DCAF). He is the former national coordinator for the West African Network for Peace in Mali (WANEP). In addition, he is a doctoral researcher in public law at Cheikh Anta Diop University (Dakar, Senegal) and the University of Legal and Political Sciences of Bamako (Mali). Prior to this he worked for a variety of NGOs and other organisations, and as an interpreter.
Read more from Boubacar Thera