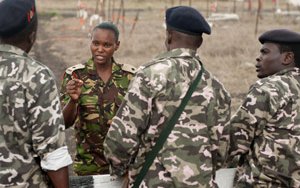 The latest massacres in northern Kenya carried out by Al Shabaab have once again raised the spectre of Kenya’s security crisis slipping out of hand. In the early hours of November 22, Al Shabaab militants ambushed a Nairobi-bound bus on the outskirts of Mandera, a town nestled in Kenya’s frontier with the Ethiopian and Somalian borders. They separated Muslims from non-Muslims, killing 28 people. Days later, Al Shabaab militants overran an encampment at a quarry also outside Mandera, killing 36 workers. Kenya’s President Uhuru Kenyatta, facing scathing opposition and social media criticism after failing to cut short a visit to Abu Dhabi when after the attack on the 22nd, succumbed to mounting political pressure.

In a televised address to the nation, he announced the resignation of the Police Inspector General, David Kimaiyo, as well as the sacking of the Internal Security Minister, Joseph Ole Lenku. The shake-up in Kenyatta’s security team raised hopes that the government would belatedly get to grips with the deepening Al Shabaab nightmare.

Well into a second year of governance under new devolution arrangements, the current crisis is far removed from the more peaceful and prosperous future that Kenyans hoped for when they overwhelmingly approved a new constitution in 2010. The new constitution was meant to help Kenya avoid a repeat of the post-election violence following the disputed December 2007 poll results, which drew the country to the brink of civil war. Yet, with the new devolution architecture not fully implemented, there is a risk that spiralling insecurity will dwarf the moral intent of Kenya’s new constitution to promote a more peaceful and equitable society.

The Mandera massacres come on the heels of a long line of atrocities that have shaken Kenya. Many expected Kenyatta to act following the September 2013 Al Shabaab siege of Nairobi’s Westgate shopping centre, which left 67 dead, including his nephew and nephew’s fiancée. But Kenyatta’s promised Commission of Inquiry into the attacks never materialised. Since Westgate, militants have continued a campaign of violence and intimidation, including a wave of attacks in coastal Lamu County over the summer that saw the Kenya Defence Forces (KDF) fan out across the Boni Forest along the Kenya-Somalia borders in search of militants.

Another thread concerns the alleged militarisation of security responses. KDF units were deployed in Lamu County during the June and July attacks, as well as in Kapedo, in Turkana County, following a November ambush by Pokot raiders that left 22 Administrative Police officers dead. It is rare for the military to leave barracks in post-independence Kenya; Kenyatta has also appointed several former military officials to key security and intelligence positions in a 2014 cabinet reshuffle. Ole Lenku’s nominated replacement, Joseph Nkaissery, is a retired army general, and served as Assistant Defence Minister under previous President Mwai Kibaki.

Therefore, far from settling these debates, the sacking of Kimaiyo and Ole Lenku is likely to increase calls for major changes to security infrastructure and renew pressure on the government to fully implement policing reforms.

Peacebuilding and devolution: an opportunity not yet taken

But the dynamics of devolution themselves complicate local peace-building efforts. This is because a significant amount of public resources and decisions regarding the allocation of these are now devolved to new county governments, which has raised the stakes considerably in local political competition.

Violence that flared in some parts of northern Kenya preceding and after the March 2013 elections centred on the control of newly-created national and county-level offices. Tensions were greatest in counties with pointed majority-minority group divisions, like Marsabit, Isiolo and Mandera. In other counties that stayed peaceful, elders from different groups met before the election to negotiate how seats could be allocated, and members of ‘their’ communities voted accordingly. This notion of ‘negotiated democracy’ was critical to preventing violence and keeping the peace.

Although Kenya’s early experience with devolution has been perilous, there are considerable opportunities in new governance arrangements to address both historic as well as emerging drivers of conflict and violence, be they inequality, land and resource rights, employment, or radicalisation of young people. Not only are substantial public resources and decision-making powers devolved to county-level governments, but the hope is that it will be easier to accommodate different interest groupings within a new governance and political-administrative architecture.

As Kenya’s insecurity deepens, and Al Shabaab further permeates the country’s politics, peacebuilders must grasp the nettle that devolution presents. Reform of security structures and strategy is urgently needed. But, so too, might the further pursuit of devolution help address deeply-seated issues contributing to violent insecurity. The debate on Kenya’s future peacebuilding has begun. However, it is not happening in the corridors of power and hotels of Nairobi. Rather, it is gathering pace far away at the margins, in growing small towns, bush centres and under trees, where the shape of devolution is being debated and decided. Peacebuilders take note.

Jeremy Lind is a Research Fellow at the Institute of Development Studies.
Read more from Jeremy Lind 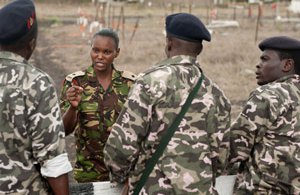