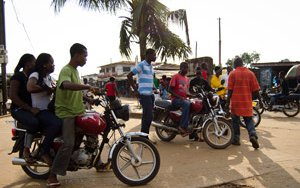 When we went through the . . . containment site after the revolution, we were demobilized . . . for five days. How can a man who went through a revolution for fourteen consecutive years [be healed in] only five days? Just [put yourself in his shoes]. You think they’ll not be traumatized? In five days’ time you say “go,” you give him US$150. Then after . . . the $150 is finished what [can he do]? So it’s good that the motorcycle business came to Liberia. If it were not so, I swear you [could not] come to this country. People will be blasting things [being violent]. You getting me? Even myself as a former [military officer], I will form my men and we will be at the corner and we will highjack the car because I’m not doing anything. But I don’t have to do that. Motorcycles came to Liberia and now I can [tell people about] this opportunity. - Former combatant

Since the end of Liberia’s protracted civil war in 2003, motorcycle taxi driving — called pen-pen driving, locally — has helped build peace in the country by providing people with both a livelihood and a means of transport while helping drivers reintegrate into society. Yet pen-pen driving is a profession fraught with challenges, and one that requires the attention of the peacebuilding community.

Many pen-pen drivers were combatants during the fourteen-year conflict (1989–2003) that devastated Liberia’s infrastructure. Motorcycles became an alternative means of transport in part because they are faster than cars and buses and are easier to access. Although pen-pen drivers have become valued service providers, they are also often perceived as outcasts. Pen-pen drivers have been known to engage in lawless behaviour and to confront both police and customers. Their low socioeconomic status also makes them vulnerable. Some are hired by criminal entities to engage in illicit activity or by political parties and politicians during campaigns and elections to intimidate and harass political opponents. Cases have been reported of their staging political violence across Liberia, notably in Monrovia. Because of this potential to trigger political violence, their integration into the country’s peacebuilding efforts is essential.

These factors motivated us to work with pen-pen drivers and those who regularly interact with them to help minimize the likelihood of political violence. We created an opportunity for community members to come together including police, drivers, and customers, to talk with each other and develop ideas for peacebuilding. In these sessions, we were listening to much more than peacebuilding strategies — we were listening to messages of hope and commitment to help improve local communities through collaboration.

The group formed a local peace committee called the Pen-Pen Peace Network. Over the last ten months, the committee has developed a multimedia campaign based on text messages, radio, and billboards to improve attitudes toward and behaviours of pen-pen drivers. It has also designed and conducted an outreach plan to various audiences. Working with the Purdue Peace Project and the Women Movement for Sustainable Development, the committee has helped design surveys to measure the impact of these strategies. It has advocated on behalf of pen-pen drivers and some members have become part of Liberia’s national-level conversation about the industry. They have all, in effect, become local leaders.

Challenges still exist. The Pen-Pen Peace Network, however, drives home the message that local, everyday citizens can be effective peacebuilders. It inspires us to believe that, together, the imagining and doing of peacebuilding is possible. Our hope is that the committee’s efforts will help pen-pen drivers reintegrate into society and contribute to the economy, undo their image as perpetrators of violence, and promote their role as agents of peace.

UPDATE: At the time this issue of Building Peace was being finalized, the Pen-Pen Peace Network initiated a public awareness campaign throughout Monrovia to educate citizens about Ebola virus prevention and created hand-washing stations around the city. The Pen-Pen Peace Network was inspired to tackle their country’s recent challenges and, with efficient transportation, the Pen-Pen drivers are well positioned to aid their community. This extension of the program’s activities maintains its focus on locally-centred initiatives.

This article was originally published in Building Peace, a regular publication sharing stories of people, communities, and organizations that are transforming the face of peace and security around the world. 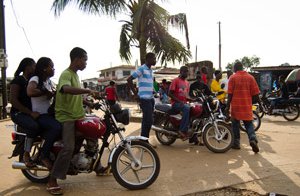