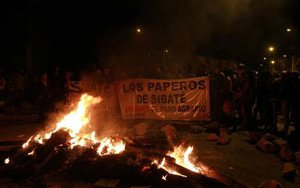 The presence of widespread peasant-led protests might lead one to consider that the grievances that led to the FARC guerrilla movement, much originated in rural Colombia, might have some validity. Commonalities between the concerns of the striking peasants and the FARC are evidenced by the fact that the first point in the current negotiation agenda between the Colombian Government and the FARC is related to land and agriculture, and that Colombia is the third most unequal country in the world. Additionally, in recent years the import of agricultural products has increased to the detriment of national production. In light of this, athere has been widespread criticism of Colombia’s signature to Free Trade Agreements and liberalisation policies..

Colombia is not only one of the most unequal countries in the world, but one where the inequality in land is beyond surreal. 70% of the poorest owners own 6% of the land, whereas the wealthiest 1% possesses 43%. Land inequality, as measured by the GINI index on land is 0.86, out of a maximum of  1. This inequality is exacerbated by agricultural policies that promote large-scale production over peasant farming, and drug traffickers often try to legalize their profits by buying land.

The current protests are not unique, but are part of a larger process. They follow previous protests by coffee growers, the judiciary, indigenous groups, cargo transporters, small miners, students unions and coca growers, among other social groups in the last two years.

In most of these protests, the FARC have expressed their solidarity. However the leaders of the protest movements have consistently claimed independence from the FARC, and have asked for their independence to be respected. This is because what commonly happens is that the guerrillas express their “sympathy and support” and/or the government accuses protestors of being sympathizers with the guerrillas. In a country where the armed conflict is still claiming many lives, these accusations and demonstrations of support are dangerous and irresponsible. In a country where violence has been exerted against civilians based on the accusation or the suspicion of being sympathizer of a particular group, populist claims of support by the FARC or unfounded accusations by the government put at risk the lives of innocent people. Interestingly, both the far right as well as the left wing parties of the country supported the recent protests.

Protest is a natural part of a healthy democracy, as people look to demonstrate dissent and discontent through political action. These peasant protests are the manifestation of political groups that believe they are not represented in the existing political structures – both left and right - and are trying to create their own space in the political landscape by bypassing both the politicians and the armed groups.

If the government does not listen to, and correct their attitude towards, the peasants by responding with real structural changes, and countinues ostracizing or ignoring them (as with the current indigenous marches), state legitimacy could be undermined. The government has thus far opted for negotiations with protestors, and so has achieved the cessation of protests through negotiation processes with remarkable consistency. However the government and the state needs to consider two important issues in order to emerge as more legitimate.

First, it needs to assess and judge diligently the cases of abuses by the riot police (for some examples search Youtube for “abusos ESMAD”), as their actions could harm negotiations and the credibility of authorities dramatically.

Secondly, it needs to reassess and design rigorous, responsive, systemic policies with regard to land and agricultural production. These policies must go beyond using subsidies for agriculture – the favoured government solution - as it will be hard to fight against the subsidies of European and North American countries. The current protests are the product of mediocre policy making over the last 25 years: liberalisation has pushed the country to face competition and the institutions that should protect the production of agricultural products are either weak or not in place. This has happened in an environment where peasants are surrounded by drug traffickers, guerrillas and delinquents without a proper government presence.

Colombia is experiencing an interesting crossroads in terms of political participation and reconfiguration of its state. Some experts argue that the current peace process could present a faster way to implement the reforms the country needs in order to involve, and be accountable, to the majority of Colombians. The current government has defined state policy as a means to promote the big agricultural industries - perpetuating land inequality – at the expense of the rural population which constitutes 23% of its population. This is especially now that peasants have found their power beyond political parties and are aware of their importance for the Colombian society.