A pipeline inspection in Chad. Some feel that the proceeds from Chad's mineral wealth are not being fairly distributed. Image credit: Ken Doerr

Chad has seen numerous popular rallies since the end of 2014. On 11 November, important rallies started in the southern town of Moundou. People were protesting against the lack of gasoline and diesel in the town, and in a symbolic move, some attacked an empty Total petrol station.

Ordinary citizens are experiencing few benefits from Chad's oil boom
People here live very close to rich, oil-producing land, with Chad pumping up 130,000 barrels a day. Yet for much of the time they have no access to petrol. When it is available, consumers must pay a local price which has increased dramatically since August 2014 – having watched the global price of oil decrease in the same period.

There are stories of significant quantities of oil refined at the Djermaya plant, north of the capital Ndjamena (and designated for the national market) being smuggled and sold in northern Cameroon and the Central African Republic - at much higher prices than the local cost in Chad. The shortages this has created have led to the development of a black market in Chad, with even higher prices for the locals.

As such, ordinary citizens are experiencing few benefits from Chad’s oil boom, which has led to Chad’s overall economy growing faster than many others in Africa.

Protests and the police: demonstrations met with violence

Other protests about local conditions quickly followed, in Ndjamena and elsewhere, in Chad’s southern Sahr region. Some demonstrations began with teachers protesting against the non-payment of their promised exam fees. Others focused on rising food prices.

These fluctuate according to season and location. However, generally speaking, food prices increased heavily throughout Chad during 2014. In Ndjamena, a 25 kilo sack of corn cost CFA 14,000 CFA ($24) in January, while in July the same amount was CFA 25,000 CFA ($41). Cooking oil was up by 50 per cent. And even the price of sugar – produced in Chad by a subsidised state firm, specifically to keep prices low – has increased by half.

80% of Chadians live on less than two dollars a day
These are significant rises in Chad, where 80 per cent of the population lives on less than two dollars a day. Some of the protests turned violent, and according to local observers, the Chadian police force killed four people, two in Ndjamena and two others in Sahr. However, as is often the case in Chad, official authorities deny the killings. In fact, Chad is renowned for both a brutal police force and for a significant discrepancy between what people report happening, and what the official Chad recognises as facts.

New protests and rallies, this time led by students, took place in Ndjamena in March. Originally started as a protest against a new law which requires everyone to wear a helmet when riding a small motorcycle, the protests erupted when police forces killed student Hassan Massino Daouda on March 9. Videos filmed by participating students, showing the brutality of the police forces, spread swiftly on the internet. Protests in Ndjamena continued for another week, and were followed with solidarity marches by the Chadian diaspora in France and Germany.

Foreign diplomats in Chad express concern about the brutality of the Chadian police force, but the Chadian military enjoys an international reputation for its efforts to fight Boko Haram and neither France, the UK or the US seems willing to do anything about the human rights abuses committed by the police in Chad. In fact, Chadian president Idriss Deby actively and consciously uses the political space created by the world’s attention on Boko Haram, and Chad’s involvement in fighting the group, to strengthen the control of his repressive regime over the Chadian population.

[more_info_box] Peace Direct will soon be launching a new section on Chad, with updates and profiles of local peacebuilding work in the country. Check back to find out more.

Ketil Hansen is associate Professor of African History at the University of Stavanger.
Read more from Ketil Hansen 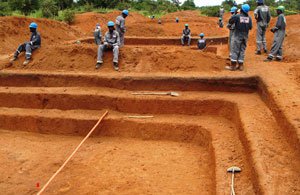