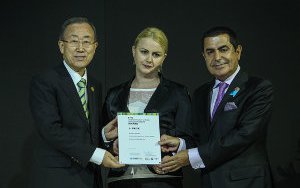 Last month, during the 6th Global Forum of the United Nations Alliance of Civilizations (UNAOC) in Bali, our project ‘Ordinary Heroes’ was awarded first prize at the 2014 Intercultural Innovation Award Ceremony by representatives from the UNAOC and the BMW Group.

The award recognises the most innovative grassroots projects that promote intercultural dialogue, understanding, and co-operation around the world. In the words of President Nassir Abdulaziz Al-Nasser, United Nations High Representative for the Alliance of Civilisations, it provides “an opportunity to celebrate those who believe that a more cohesive and inclusive world is not only possible, but also indispensable.”

Over 600 non-profit organisations from over 100 countries applied for the award, and 11 organisations were ultimately selected as finalists for this year’s forum, which was attended by more than 1,200 participants representing heads of states and governments, foreign ministers, and members of the Alliance Group of Friends.

Upon receiving the award for first place, Velma Šarić, our Founder and Executive Director at Post-Conflict Research Center (PCRC), gave a moving speech to those in attendance at the forum, stating “Many of you may remember Bosnia as it was 20 years ago—horrific images of war and the Srebrenica genocide in 1995. Today we would like to leave you with a new image of Bosnia in which the intellect and energy of Bosnia’s youth can be seen. Bosnia has gained extensive knowledge from this legacy of war and our country possesses great potential to create projects that can contribute to peace and intercultural understanding at the global level.”

Our submission, ‘Ordinary Heroes’, is a multimedia peacebuilding project that utilises international stories of rescuer behaviour and moral courage to promote reconciliation and interethnic cooperation between Bosnia’s divided citizens and youth. It consists of several components: a series of documentaries promoting themes of rescuer behaviour and interethnic cooperation; ‘Heroes in Training’ youth workshops that focus on developing pro-social behaviour and active bystandership amongst Bosnian youth; and “The Rescuers” travelling photography exhibition, which brings international stories of intercultural cooperation to town squares and local public spaces across Bosnia.

The narratives that underlie each of these components are purposefully multi-faceted: they are drawn from across Bosnia’s three main constituent ethnic groups, and represent the experiences of both men and women, and of rescuers and those they saved. These ordinary heroes come from all walks of life, but they each represent moral courage, compassion, and a love for others that motivated them to risk their own lives to save neighbours, friends, and strangers during times of genocide and mass atrocity.

In focusing on these often overlooked stories of the past, the project seeks to propagate an alternative and more complex interpretation of the Bosnian war – leaving behind any notion of ethnic division as an all encompassing or natural state of existence. In turn, this serves to encourage ordinary people to act positively as heroes and agents of social change in the present, further breaking down barriers of ethnic division in local communities across the country.

Young people are also of central concern to the project, and as such it takes care to give them a rare opportunity to move beyond conceptual learning and become directly involved in the peacebuilding process. In addition to the ‘Heroes in Training’ workshops that engage participants in activities and discussion around thematic issues of transitional justice, group dynamics, discrimination, and active and passive bystandership, it also encourages them to discover, collect, and share stories of interethnic cooperation from their own communities. As Velma remarked upon winning the award: “We have a responsibility to inspire and encourage youth in Bosnia to overcome the legacies that war has left behind. We hope that through this project we can show them that they have the power to change and influence the future for the better.”

Until now, this work has focused on towns and cities across both the Federation of Bosnia-Herzegovina and Republika Srpska. The Intercultural Innovation Award will allow us to broaden our horizons. In essence, we can now reach more people, expanding our work within Bosnia, extending the project activities to Zagreb, Croatia and Belgrade, Serbia, and developing new materials that can be used by like-minded organisations to replicate the project within their own communities. Furthermore, the documentary films are set to broadcast this autumn on Al Jazeera Balkans’ regional programme ‘Regioscope’, which reaches 500,000 viewers across the Balkans.

These are not the only benefits provided by the award. Along with the other 10 finalists, PCRC is proud to become part of the “World Intercultural Facility for Innovation” (WIFI) – a UNAOC and BMW Group programme designed to help organisations become more efficient and expand. Over the next 12 months, PCRC staff will have access to specialised training to further develop a diverse set of skills including leadership, communications, and financial sustainability, as well as tailored support to encourage the replication of the ‘Ordinary Heroes’ project. Thus, significant opportunities await both PCRC and all of the organisations that made it to the final of the awards, and here at PCRC we are extremely excited about the year to come!