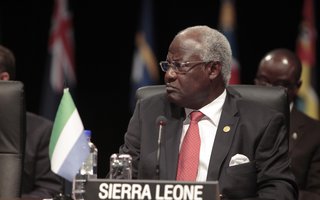 Sierra Leone's President's unilateral decision to relieve his former Vice President (VP) of his duties in 2015 has been declared unconstitutional by the Economic Community of West African States (ECOWAS) Regional Court in Abuja, Nigeria.

The sacking of Sierra Leone’s former VP, Samuel Sam-Sumana, provoked a yearlong constitutional battle that was eventually settled by the country’s Supreme Court.

His legal team had challenged President Koroma’s decision to relieve him of his duties arguing that the president did not have the legal authority to sack his VP in the manner that he did without recourse to the constitutional procedure.

Five Supreme Court judges later ruled that President Koroma had the constitutional powers to sack his vice without a parliamentary impeachment procedure. This unexpected turn of events provoked strong criticism from both civil society and ordinary citizens.

The sacked VP, in disagreement with the verdict, sought legal redress at the ECOWAS Regional Court by bringing a law suit in 2016 that challenged his dismissal. His lawyers accused the government of violating Mr. Sam-Sumana’s right through his unlawful removal from office.

They argued that the VP’s dismissal deprived him of his right to protection of the law, right to due process and his right to participate in government and governance. They requested the ECOWAS Court to declare former VP’s sacking as illegal and to order Sierra Leone to take the necessary steps in remediation of the several rights’ violations.

In a unanimous decision on Monday 27 November, 2017, the ECOWAS Regional Court gave its verdict in favour of Mr. Sam-Sumana. The court ruled that President Koroma’s unilateral decision to remove his vice from office was illegal and that it violated the VP’s fundamental human rights to a fair hearing as guaranteed by the African Charter on Human and People’s Rights to which Sierra Leone is a signatory. The court ordered that Sam-Sumana be paid his outstanding salaries and emoluments dating back to his dismissal.

This ruling has been received with strong reactions from the Government of Sierra Leone. The Attorney General (AG) and Minister of Justice, Joseph Fitzgerald Kamara, has dismissed the verdict, describing it as not having the jurisdiction to rule on the case that has been adjudicated by Sierra Leone’s Supreme Court.

On national radio, Mr. Kamara said: “while we await the full correspondence from the ECOWAS court on the verdict, our office wishes to reiterate its legal position that the ECOWAS court lacks competence and jurisdiction over the aforementioned matter.

The Supreme Court of Sierra Leone did rule on the above matter and therefore no other court is competent to overrule it except by itself. Therefore, the Government of Sierra Leone refused to participate in the proceedings and neither accept nor recognize the ECOWAS court in respect of the said judgment."

The ECOWAS Court has however dismissed the Sierra Leone Government’s argument that it did not have jurisdiction to adjudicate the case.

Reaction from the ground

Meanwhile, the AG’s comments have evoked public outrage with many describing it as disrespectful to the court. Some people say that the AG’s reaction is unfortunate in light of the role ECOWAS played to restore peace and constitutionality in Sierra Leone. Civil society has called on the government to reconsider its decision and treat the ruling with careful consideration.

Ibrahim Tommy is Executive Director of Center for Accountability and Rule of Law (CARL), a civil society working on governance, human rights and legal advocacy.

He said the government could be making a big mistake if they are not careful how they respond to the decision: “Today, the court’s decision is against the government, but tomorrow it may be the government’s turn to sue an individual or a corporate entity to the ECOWAS Court. Therefore, the government should be slow in just rubbishing the court’s ruling.”

Mr. Tommy notes that there is already a judicial precedent before the court for Togo, whose constitutional court had ruled on a matter that was overturned by the ECOWAS Court. “If the government had made a representation at the court and argued its position, it would have given us chance to hear their own side of the story; and that perhaps is the biggest loss in this matter,” Mr. Tommy observed.

Impact on peace and stability?

The ECOWAS ruling could have a massive impact on the country’s peace and stability, whether positive or negative

Sahr Sewa is the Secretary-General for the Defenders Peace Building Organisation, a civil society working to promote peace and conflict prevention in Sierra Leone.

He views the ECOWAS’s ruling as something that the government should handle with utmost care, given its potential to either positively or negatively impact on the country’s peace and security.

Mr. Sewa says “ECOWAS is an umbrella body for a number of African nations including Sierra Leone, which makes it incumbent on the government to abide by its ruling in order to protect Sierra Leone’s regional image.”

He continued, “violating the country’s national constitution creates room for subsequent governments to tamper with our laws, thereby creating a pathway for violence and instability. Another implication is that citizens would have reasons to believe that their laws can no longer protect them, making people take the law into their hands”

The former VP himself, who had described the Sierra Leone Supreme Court’s verdict as “a disgrace to the judiciary,” celebrated his success after hearing the ruling. He said he was happy that the ECOWAS Court had restored the dignity of Sierra Leone’s constitution by ruling that the President was wrong to remove him from office.

“I’m very pleased with the decision of the court and Sierra Leone being a signatory to the ECOWAS protocol, I don’t think president Koroma would walk away from that,” the former VP said on the BBC’s Focus on Africa radio programme after the verdict was declared.

This decision may come in handy for Mr. Sam Sumana as he prepares to contest for the presidency in the March 2018 elections under a newly formed Coalition4Change party that is still awaiting its full accreditation from the Political Parties Registration Commission (PPRC).

To many observers, this case is a landmark ruling for the ECOWAS Court because it deals with a former VP who was illegally removed from office.

Already civil societiy has warned that continuous denial of Sierra Leone to abide by the court’s ruling will be inimical to the country’s future within the ECOWAS region.

Political commentators view this constitutional dilemma as a threat to the country’s democratic future.

It remains to be seen whether the government will continue to refuse the court’s ruling or change its position on the matter.

Human rights Governance
Disclaimer: The views expressed in this article are those of the author and do not represent the views or position of Peace Direct.

More on Human rights and Governance →