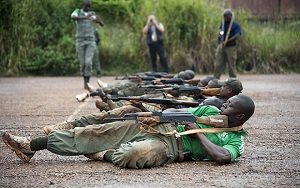 Soldiers training in CAR. Image credit: UN Photos
To commit a crime is, in theory, to invite judicial punishment. But in the Central African Republic, perpetrators have been committing crime without fearing judicial reprisals, and are free to wander throughout the country.
Two years after the beginning of the Central African crisis, a renewal of violence is taking place. This has led to the displacement of some 50,000 people since the beginning of 2015, according to the UNHCR.

To commit a crime is, in theory, to invite judicial punishment. But in the Central African Republic, perpetrators have been committing crime without fearing judicial reprisals, and are free to wander throughout the country. Before the present conflict began in January 2013, criminal judicial institutions were already lacking. Now, they are almost non-existent, and impunity prevails.

Without any justice, reparations cannot be obtained by victims, and people live surrounded by fear and suspicion. This breeds a climate of distrust and insecurity, which in turn contributes to the cycle of violence. The fight against impunity is therefore a must to re-establish security in the country, but also to rebuild trust among the population and to enable victims to obtain compensation and begin on the path to reconciliation.

To date, the management of the crisis perpetuates a long-lasting culture of impunity in Central African Republic. Many amnesty laws have been passed during the last few decades, benefiting political leaders and the heads of armed groups. Among them are former president Ange Félix Patassé.

Amnesty: peace at the expense of justice?

On 28 January 2015, ex-Seleka and anti-Balaka representatives reached an agreement in Nairobi with the help of Congolese President, Denis Sassou Nguesso.

This agreement provided for a change of government, a new political transition for the country, an amnesty law and a cease of hostilities between armed groups. Denounced by the international community, the parties reached another agreement on February 21, giving up on all political aspects, including the amnesty law, but retaining the ceasefire. But practices of the international community and the national authorities continue to rise to impunity.

Civil society has taken action to begin investigating crimes perpetrated in the Central African Republic
Indeed, the upcoming national forum for reconciliation organised in Bangui by national authorities will gather various armed groups leaders, but no criteria have yet been made official considering the responsibility of various actors in crime perpetration. There is a clear problem here, as this type of event allows for an inclusive national dialogue – but means criminals do not fear justice.

Fatou Bensouda, Prosecutor of the International Criminal Court, has opened an investigation into crimes committed in CAR, but past experience shows that the process can take years. The Ministry of Justice and MINUSCA, the UN peacekeeping mission, signed an agreement providing for the settlement of a hybrid jurisdiction, the Special Criminal Court, composed of national and international judges. Despite some limits, hybrid tribunals have shown efficiency in the past years – for example, in Sierra Leone and Cambodia – but they can require months and year to be effective, with all parties needing to reach an agreement on the financing and composition of the tribunal.

What is certain is that considering the almost non-existent judicial system in the country, alternative solutions must be taken by civil society.

The Central African Republic has a strong network of NGOs defending human rights, with many gathered into a national network, the Réseau des ONG de Promotion et Défense des Droits de l’Homme en République Centrafricain. There are also many charismatic religious leaders acting for peace. They have the means to help pursue justice. Their main tool is the fight against religious and identity issues helping to perpetuate the conflict. But they can be helpful in many different ways, including:

Civil society and the diaspora community have a lot of ideas to help promote reconciliation in the Central African Republic. Their work will be crucial in the important fight against insecurity. But criminal justice should not be forgotten in the fight to break the endless power of armed groups. 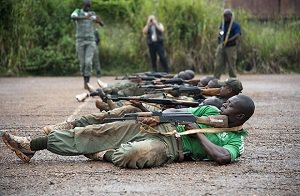