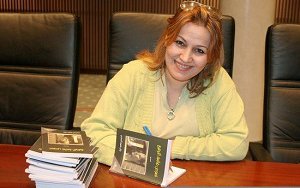 Libyan writer Razan Almoghrabi, who is currently in exile in Tunisia.

"I don't want you to put my picture on your facebook account in case I am shot dead. I just want to live."

I felt as if I had been hit by lightning. I’d always known she was at risk, but what she said made me realise the danger she was in.

So when my friend told me this, I struggled to find any words. In the end, all I could say was “May God protect you.” I shed a tear. I think she did too, but neither of us saw the other crying.

Earlier that day, my friend’s friend, Salwa Bughaighis, had been assassinated. She was a prominent Libyan lawyer and human rights activist. My friend thought she might be next. Women in the opposition are often targets, and she was a widow, a single mother and had no tribe to defend her.

Who is my friend? She is Razan Naiem Almoghrabi, a journalist and novelist. And that day, in June last year, was a turning point. She realised that she had to find a way out of Libya in order not to end up as a memory – as a photo on facebook.

At risk: the danger of having an opinion

Minutes before the assassination, Razan and Salwa had been planning a demonstration for the following day. When Razan got the news, she collapsed and had a nervous breakdown. Her son and daughter looked at her, screaming and crying with despair. Hind, her daughter, went to her room and started packing.

Hind’s fear was justified. Her mother had been receiving threats over the phone and through fake facebook accounts. Razan is a vocal critic of both the armed militias in Libya and the growing religious fundamentalism there endorsed by the Mufti Sheikh Sadek Al Ghiryani.

The situation is grim. Since 2013, kidnapping has become widespread in Tripoli. Everyone has become a target, including prime ministers, such as Ali Zeidan. Female students have been taken from their classes, lawyers abducted in front of their children, and journalists and army officers murdered in Benghazi.

In 2012, Razan invited me on a journalistic mission to Libya. I spent ten overwhelming days there. Hope was in the streets. Sporadic gunshots could be heard at night. But it didn't scare me. After all, I am Lebanese – I grew up in a civil war. And it seemed not to bother the Libyans either. They felt safe, although they realised the need to start improving the situation, in terms of law and order. They knew it wouldn’t be easy – how could it be? Building a state from scratch, after four decades of dictatorship, requires time and patience.

Rebels with a cause: the early days of the revolution

The women I met smuggled arms and rebels. They donated all their savings and risked their lives to deliver ammunition and food. They wrote political statements and helped fly the flag of the revolution, the one the country had before Gadhafi took power in 1969. That flag flew high over buildings and bridges every morning, in an act of defiance.

I listened to these stories and visited the places they told me about. Pictures of martyrs were everywhere. Despite the human losses, Libyans believed that their sacrifices should not be in vain. I thought I was witnessing history, not only for Libya but for the Arab world as well. Back then, in 2012, hopes for the ‘Arab Spring’ were still high, even in Syria. And two months after my visit, Libya held its first free parliamentary elections. Unlike Egypt and Tunisia, the Islamists lost and the liberals won. But what the fundamentalist groups failed to achieve at the ballot box, they tried to seize with arms. Chaos began to spread.

Razan's daughter Hind, holding a sign with one message: "No" - to militias, violence and religious fundamentalism.

My friend witnessed it all. But Razan refused to give up. She was at every demonstration. Then the threats started. She was harassed at work, and eventually sacked. More than once she received photoshopped pictures of her decapitated body. Both her siblings and their partners were also threatened. Once, her car was even fired upon, and her children narrowly escaped being kidnapped on their way to the airport.

In March 2014, Razan came to Beirut to appear on a television show. We met often while she was there, and I could sense that she was worried. She believed the revolution was lost – that one dictatorship had replaced another, and that civil activists like her were at risk.

Days after, her daughter Hind was harassed at university for not being veiled. She was being taken away when she called her mother. Razan mobilised everyone she knew. Hours later, her daughter was released. The incident, which was picked up by the international media, shocked me. Hind is an adorable young woman, already very mature at the age of 19, and I have a special bond with her. What she endured proved that the Libya I loved was fading. When I was there, no one ever told me to cover my hair or wear long sleeves. I walked through the old town and took taxis in Tripoli, and I felt safe.

After speaking publicly about these incidents, Razan received more threats. So she disappeared. “We barely went out, we were confined to our own house. From time to time, I took the risk of leaving in disguise, because I was trying to get new passports.” This lasted for months. Razan told me that she used to daydream of living in a safe country, in a little house in the mountains, far from depression and despair.

Razan Almoghrabi was recently awarded with a prize honouring her commitment to freedom of expression.

But one day, while preparing the Iftar feast during Ramadan, she cried until she collapsed in her kitchen. The passport office had been closed down, and the militias occupied the airport and burnt it to the ground. She felt trapped. In July, she managed to get her family passports. The fighting was fierce in Tripoli, so, like so many others, she left everything behind and went to Tunisia with what she could carry.

Razan is physically safe now, but the threats continue, as she, Tareq and Hind haven’t stopped their activism. Libya is with them in their hearts, and it hurts.

The future is blurred. "I can only see fear," she says. Razan and her children don't have a permanent home in Tunisia, and Hind cannot enrol in the public university there because she is a foreigner.

Ironically Razan's Arabic-language 'Booker' prize nominated novel, "Women of the Wind," is about the dream of emigration. The women she portrayed walked into an unknown future. She asked at the end of the book: "why don't they give their country another chance, even though it has let them down once?" Razan tells me she has become one of the women of her novel, and will look for the answers the hard way, just like them. She hopes that one day, the wind will bring her back to Libya. And this, my friend, will be your next novel.

Razan Almoghrabi was recently recognised at the 2015 OxfamNovib/PEN Awards for freedom of expression. The awards honour courageous writers who work in danger around the world. Past winners have included Hrant Dink, from Turkey’s Armenian minority, Mexican journalist and human rights activist Lydia Cacho, and Syrian writer and journalist Samar Yazebk. OxfamNovib's Executive Director, Farah Karimi, gave a speech at this year's awards ceremony. It is available to read here. [/more_info_box]

Sawssan Abou-Zahr is a Lebanese journalist, editor and consultant. Sawssan is Peace Direct's Local Peacebuilding Expert in Lebanon.
Read more from Sawssan Abou-Zahr
Disclaimer: The views expressed in this article are those of the author and do not represent the views or position of Peace Direct.