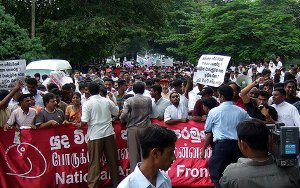 The issue of reconciliation has featured prominently in public discourse in post-war Sri Lanka, with debates focusing on competing understandings of the term ‘reconciliation’. Two main versions of the term can be identified. First, a version that sees reconciliation as about addressing conflict between state and society and therefore necessarily linked to political reform, justice and accountability for past crimes and wrong-doing. Second, a competing account that frames reconciliation largely in terms of societal relations - the return of friendly relations between opposing groups.

Government policy has been rooted firmly in the latter camp, not only denying the legitimacy of societal and political grievances of minority communities, but also questioning these groups’ right to exist as political communities.  In a widely publicised speech delivered in the aftermath of the Sri Lankan armed forces’ victory over the Liberation Tigers of Tamil Eelam (LTTE) in 2009, the President declared:

We have removed the word minorities from our vocabulary three years ago. No longer are the Tamils, Muslims, Burghers, Malays and any others minorities. There are only two peoples in this country. One is the people that love this country. The other comprises the small groups that have no love for the land of their birth.

One prominent new group working on reconciliation is Sri Lanka Unites (featured previously on this blog), a network of young professionals that promotes reconciliation in schools and amongst community leaders. The organisation’s takes a ‘multi-pronged approach to promoting reconciliation’ that involves motivating young leaders ‘to understand the need for reconciliation’ and empowering them to undertake inter-community reconciliation activities in their home regions. SLU endorse a looser definition that focuses on breaking down barriers between ethnic communities by promoting mutual acceptance and interaction. SLU has distanced itself from past debates on reconciliation and peacebuilding in Sri Lanka, which have focused on questions of political and institutional reform. The organisation is unusual in that it adopts a liberal, cosmopolitan outlook, yet is not solely reliant on foreign funding. It has established active branches amongst the Sri Lankan diaspora in several western countries.

The group does not explicitly promote a particular version of reconciliation but instead adopts an exploratory stance where individual members can reach their own interpretation: as one member puts it: ‘the process of reconciliation begins with me, not anyone else’.  This approach represents a rational response to the restrictive political environment in which SLU operates. As previous research has shown, maintaining a degree of congruence with the majoritarian discourse, and avoiding direct association with international agencies is useful in a context where NGOs have been harassed by the state and attacked for their links to foreign donors.

Transitional justice and reconciliation Children and youth
Disclaimer: The views expressed in this article are those of the author and do not represent the views or position of Peace Direct.

More on Transitional justice and reconciliation and Children and youth → 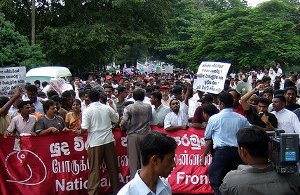