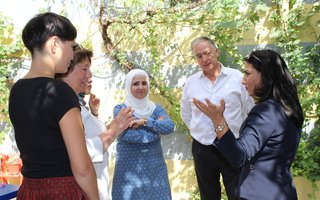 Sometimes to tell the story of an organisation, you have to go back to the life of the people who stand behind it. Such is the case of Kareemat, the first Syrian women-led organisation in Turkey, and its founder, Najlaa Sheekh.

While Kareemat (meaning “women with dignity” in Arabic) developed as an organisation, Najlaa herself grew as a woman and an activist. At the age of 40, she is now in full control of her life, a role model to many fellow Syrians, and a woman with big dreams for her family, her organisation, her country and herself.

The vision for Kareemat is that it will continue to fight for its survival. That one day, it will operate back home in Syria and become the nexus of a women's renaissance there.

Originally from the city of Azaz in north-western Syria, she was raised in Damascus and married at the age of nineteen. She recalls being taught that her husband's wellbeing had to come first, even if it was at the expense of her own.

To help him financially while he was finishing his postgraduate studies, Najlaa sold clothes from her house. She also continued with her studies from home. An avid reader, she tutored pupils in Arabic at her house in Darayya, a suburb to the south-west of Damascus.

Despite the fact that she had been the de-facto breadwinner of the family for years, her husband still held the belief that he was superior to her. The family was receiving a small income from a small investment, but mostly relied on her efforts.

As she tells me her story, she shows no signs of bitterness or anger. It was hard for her husband to get a job after graduating and she does not blame him. His father had died in the massacre inside the notorious Tadmur prison in June 1980 where political dissidents were brutally executed. Although he was only a child then, he was denied his basic civil rights, and could not fulfil his dream of becoming a university lecturer.

Najlaa's family was active in opposing the Assad regime and dynastic rule. In her twenties she joined a non-violent group in Darayya, which was targeted by the state. Some young male members of the group were arrested in 2003 and she was also interrogated. In 2005, she shifted her attention to psychological support for children and the elderly, as if she knew what was going to happen to Syrians. She now believes that trauma healing is a prerequisite for the process of transitional justice.

She was, and still is, fond of psychology, and she wished to study it at university. However, in 2008, her husband was sent to Aleppo for his mandatory military service. So, there she was, all by herself with two sons already enrolled in school. Giving them a proper education was her priority. However, it was not easy. A good education was a privilege for the Alawites. Public hospitals were in a state of chaos. "We felt like strangers in our own country; and this is the worst feeling ever," she said.

When the Arab revolutions erupted in 2011, Najlaa believed Syria would follow suit. She recalls: "All we wanted were reforms in the education and health sectors, not to topple the regime [back then]. These were our demands during the first peaceful demonstration in Damascus, but we were then attacked. My pregnant friend was arrested." After the brutal crackdown on Daraa, she took her sons to the streets and was the first woman participating in demonstrations alongside men, including her husband.

Given their background, this activism did not go unnoticed. The authorities forced themselves into Najlaa's home. Shortly after, her husband was arrested, as well as her father, uncle and cousin in Aleppo. She roamed from one security facility to another asking for their release. In Darayya she would lead female demonstrations calling for the freedom of all detainees.

She had to move to Aleppo; however, her parents’ house there was bombed. In 2012, she was displaced again and was forced to go to the Syrian city of Azaz to take shelter at her uncle’s home, where her extended family survived a fatal barrel bomb attack. Her younger son was injured.

Najlaa tells me in a quivering voice that she does not wish to talk about it. I respect that and there is a long moment of silence.

Despite hearing so many touching stories from Syrians since 2011, I still cannot find the right words to comfort people in front of me; everything seems like a cold cliche.

I decided to change the subject and talk about Kareemat, the organisation which I know is very dear to her heart. Then, with a determined sober tone, she recalls: "I was told my son passed away. I lost my ability to walk from the shock. My mother and brother went to look for his body, so we could bury him. Luckily, he was alive but had been injured, and so was my cousin. We didn't die but 80 people did. We decided to leave for Turkey. We were fasting (during the holy month of Ramadan) and had nothing; no money, no clothes, nothing. My parents and uncles did not have passports. In our first night in Turkey we stayed in a stable full of big rats, very big rats." She gestures to show me their size. As she recounts her story to me I have a strong sense that the bombing in Azaz and the horrible company of the rats changed her life for good. She was in charge of a lot of people and had to act. Crying was a luxury, she couldn't be weak.

When her husband was released, he denounced political activism. Unfortunately, he kept the same attitude in Turkey. Granted, he didn't prevent her from going out to work, but he tried to make her feel that her success was the result of him letting her do what she wanted to do. When Najlaa's activism had gained recognition, his ego prevented him from uttering the word, "congratulations". He was unable to admit that his naive young bride blossomed into an independent self-made woman whose father and brothers embraced her evolution with pride.

A divorce was inevitable.

Despite hearing so many touching stories from Syrians since 2011, I still cannot find the right words to comfort people in front of me; everything seems like a cold cliche.

Shortly after the family's settlement in Kilis in South Central Turkey, Najlaa saw fellow Syrian women waiting in long queues to get bread, milk and diapers. She explains mournfully that this broke her heart, saying,

"We didn't launch a revolution to stand in lines begging for help".

She asked them what work they could do; they said sewing. She then talked to the owner of her house who initially thought that she needed money for her son’s treatment. He gave her a little sum of money. She went back to the eighteen women, bought them wool to work with and had no idea what would come next. The landlord suggested they sell the products in an exhibition and helped her get approval from the Turkish authorities.

This is how Kareemat was born in 2013; set up in Najlaa's modest rented home, so the Syrians in Kilis would not be a burden on the host community and local authorities.

Given her interest in psychology, she noticed some troubling signs in some of the women. When other organisations wanted to work on the concept of transitional justice with the Syrian community in Turkey, she believed it was premature. Women were forcing their sons and grandsons to take up arms in order to avenge the death of relatives. Through dialogue and support, many were able to overcome their anger.

Najlaa faced a similar challenge in her own family two years ago. Her eldest son was 16 years old when he told her that he decided to go to Manbij in Aleppo to join armed groups fighting the Syrian regime. Here too she relied on her knowledge of psychology. "My heart was bleeding, but I could not show it. He was a teenager and I felt I could not challenge him and risk losing him. I asked him to think more about it and that we would discuss it later. He went to sleep. I couldn't. The following day I cried at work. I am a strong woman but the thought of losing him to extremism was too much to handle. I asked for help from friends who joined me for my talk with him. After five days, I told him I would go with him, and so did his brother. He must have felt a sense of responsibility and guilt. Shortly after he changed his mind, and he was able to influence his friends. They all went back to school."

It was another turning point for Najlaa who realised she had a new mission and should help the sons of other mothers: "they were just boys seeking an escape from their bitter realities."

Kareemat has been able to demonstrate a positive impact through its activities with young men and female refugees saved from prostitution, and it has empowered women economically through vocational training and literacy courses. However, the organisation has constantly struggled with financial resources. Najlaa is always worried about sustainability and feels responsible for all the beneficiaries. She worries about letting them down, as if they were her own children, though some are older than her. You feel it when listening to her that the organisation is a living being and she will protect it with her life.

This is how Kareemat was born in 2013; set up in Najlaa's modest rented home, so the Syrians in Kilis would not be a burden on the host community and local authorities.

The vision for Kareemat is that it will continue to fight for its survival. That one day, it will operate back home in Syria and become the nexus of a women's renaissance there. This is the ultimate goal. Until then, it continues to achieve smaller but equally important goals. Najlaa has recently enrolled in university. She will finally fulfil her dream, but instead of psychology, she chose philosophy. Her eldest son will join the same university and plans to compete with her on getting the highest grades to "make Syria proud".

Kareemat was chosen as a finalist for this year’s Tomorrow’s Peacebuilders Awards. Read more about the other finalists here.

Culture, media and advocacy Women, Peace and Security Human rights Dialogue and mediation Preventing violent extremism
Disclaimer: The views expressed in this article are those of the author and do not represent the views or position of Peace Direct.