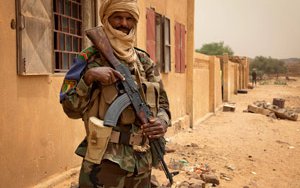 Image credit: UN Mission in Mali
There needs to be a culture of inclusive, participatory and constructive dialogue between all segments of society, in north and south, instead of the language of guns.
Mali is suffering from instability and political unrest because of rebellion, a coup d’état and the proliferation of non-state armed groups. The country has signed three major peace accords in its history, but none has led to peace. It is impossible to understand what is happening now without looking at the historical context. Here we begin with Malian independence, in 1960.

Chronic instability: resentment in the north, unrest in the south

After achieving independence from France, the first Malian president, Modibo Keita, declared a one party state. Kéita withdrew Mali from the African Financial Community (CFA) in 1962, the same year in which a rebellion broke out in Kidal, in the north-east. Kéita also began fiercely to repress the Tuareg population of the north. That repression provoked an important exodus of the Tuareg community to neighbouring countries, and polarised the situation both in the country and on the international scene. Army Lieutenant Moussa Traoré seized the opportunity of that deep division to overthrow the president in 1968.

He would go in to reign for 23 years, reintegrating Mali into the CFA, but ultimately establishing another authoritarian regime. He sentenced to death nine people accused of corruption in 1987, and under his rule there was a massacre of the Tuareg population in 1990. The Tuareg had launched an armed attack against the Malian army to liberate a Nigerian Tuareg fighter arrested in the town of Menaka in the region of Gao. Moussa Traoré sent the army north and more than 200 people were killed. A huge demonstration against Traoré’s dictatorship was organised in response in the capital, Bamako.

In the middle of that political polarisation, in March 1991, the army arrested Touré and removed him from power. Lieutenant Amadou Toumani Touré (popularly known as ATT) established a transitional government and presidential elections in 1992, which were won by Alpha Oumar Konaré. He served for two terms before ATT won Mali’s third presidential election in 2002.

Mali has signed three major political agreements with the rebel Tuareg movement: the Tamanrasset agreement of 1991, the Pact National signed in the 1990s, and the Algiers Accord in 2006.

The Tamanrasset peace agreement was signed on January 6, 1991 when president Traoré realised that he would be unable to eliminate the Tuareg rebel movements entirely. At that time, he was facing two main threats: a rebellion movement in the north and social pressure in Bamako.

In Tamanrasset, in the south of Algeria, Traoré signed a peace deal with Tuareg fighters that envisaged a substantial reduction of the Malian army in the north. The agreement, which focused on military issues, provided for the disengagement of the Malian army from running the civil administration, the suppression of certain military posts, and the confinement of the army’s role to that of defending Mali’s borders. In addition, it created the framework for Tuareg fighters to be integrated into the Malian Armed Forces (FAMA).

Ultimately, Tamanrasset failed because of a lack of confidence between the parties, and because the army was deeply frustrated at the concessions made to the president. The coup d’état of March 1991 – just two months after the signings of the accords – sealed their fate.

Amadou Toumani Touré, elected after the period of transitional government, initiated a dialogue under the auspices of Algeria. The Pact National was signed on April 11, 1992 between the Malian government and Unified Movements and Fronts of Azawad (MFUA – Azawad is the Tuareg name for their ancestral lands across northern Mali and the other countries of the Sahel).

The overall objective of the Pact National was to address the historical roots of conflict in Mali and pave the way for peace and development. It, and the other accords, pay wide attention to military and security aspects – but neglect the developmental needs of the population, which is one of their problems.

The key provisions of the Pact National included the establishment of commissions to investigate abuses, prisoner exchanges, the disarmament and demobilisation of combatants and their integration into Malian civilian and military structures, the reduction of the military presence in the north, the return of refugees, the construction of infrastructure, new administrative structures and local, regional and inter-regional assemblies.

The military requirements had some success, 2,140 ex-combatants being integrated in the army and 150 in civil services from 1990 to 2006. In addition, 12,181 Tuareg rebels received around $650 for 866 projects focusing on livestock thanks to a UN Trust Fund.

The Algiers Accord signed in 2006 included further provisions for DDR and the development of the northern regions. But very little was done to implement them. In 2010, in an attempt to revive the Algiers accord, the EU initiated the Special Program for Peace, Security and Development in Sahel (PSPSDN), and in 2011 gave the Malian government €50 million.

But the programme had a heavy focus on security, and doing so has done little to reassure northern Malians that they have the trust and support of the government in Bamako, according to Helen Wilandh from the Stockholm International Peace Research Institute. It was mainly an opportunity for the Malian army and police to reinforce their presence in the north, at the expense of school and road building and the socio-economic development of the region in general.

Accords for what? Political will and the need for a debate on the state

There is a feeling among Malian officials that dialogue with the MNLA has been imposed on them by the international community, led by France. Malijet, a Malian newspaper, has reported the president, Ibrahim Boubacar Keita (IBK), saying that Mali needs support, not imposition.

Nine months after his election, the government’s promise of dialogue with the Tuareg movements had still not started, with each side wanting talks to be held in a different place; the government in Algeria, the Tuareg in Burkina Faso.

But IBK and other senior politicians have rejected any possibility of discussing federalism, which does not bode well for building a sustainable peace. This is the real issue. High-level officials may not want to engage in that debate, but at local level it has already started. The Tuareg are not seeking secession but greater self-determination for Timbuktu, Gao and Kidal as part of a federal state.

More and people are talking about federalism. Aliou Hamadoun Yonfo, a Malian scholar in Canada, argues in favour of a federalism that would properly take into account the differences between and needs of all groups in Mali while respecting their fundamental rights and not changing Mali’s territorial arrangements. Some of the victims of the current conflict agree. Ag Doho, a Tuareg refugee at the Sag-Nioniogo camp in Burkina Faso, told the IRIN news service that the government in Bamako is in danger of repeating mistakes from the past.

Federalism need not mean separation or independence. But it does mean a shift from a unitary state to one in which provinces have real power to govern themselves. And the constant refusal even to discuss the idea in Mali will do nothing to solve the country’s problems.

More than 160,000 refugees remain in countries neighbouring Mali, including Burkina Faso, Mauritania, Algeria and Niger, victims of the recent conflict. The few Tuareg who have returned have generally not gone back to their homes in the north but stayed in Bamako, fearing reprisals. Many have been accused of supporting the enemy, and risk being stigmatised.

At a recent reconciliation forum in Assongo organised by the government, some community leaders, claiming to be ‘authentic natives’ of the region, refused the return of the Arab community from Ayorou in Niger. Other worrying stories have been reported, such as the death threats made to a young Arab man after his arrest and then released by the armed forces. Ethnic and community tension in Assongo are the symbol of deep community cleavages. Fostering social cohesion is going to be one of the major challenges, in Mali in general and the north in particular.

Fostering social cohesion is going to be one of the major challenges, in Mali in general and the north in particular.
Violence in Kidal in May 2014 has highlighted the fact that situation is still volatile and fragile. Banditry, sporadic attacks and ambushes around key northern cities like Timbuktu, Gao and Kidal continue. Traders and famers face difficulties.

The return of refugees and internally displaced persons to their communities remains a big challenge for civil society, the government and the international community. Without their proper reintegration there could be serious consequences. And even before that, refugees must actually cover the distance. The UNHCR has said that a tripartite agreement must be signed by the governments of Burkina Faso, Mali and UNHCR before any serious repatriation programme can be set in motion.

Tibuktu, Gao and Kidal are very underdeveloped. There are no good roads, and infrastructure including clean water and access to health care barely exists. Kidal has 62 schools and only one secondary school, and youth unemployment is 80%. People in the north think that the government in Bamako does not care about them. The first and second presidents of Mali, Modibo Keita and Moussa Traoré, allocated hardly any money to the north.

The lack of communications means the region has been near completely isolated, and the people there feel like the government has abandoned them. This is why they have little attachment to the concept of the Malian state.

There are many obstacles on the road to peace in Mali. Political instability has led to issues of security being privileged over other developmental needs. The priority challenge is to tackle the question of which the form the state should take and how it can incorporate and support all of Mali’s people. The return and successful reintegration of refugees and IDPs is vital to restarting community life. And behind all of this should be a clear strategy to support the socio-economic development of Mali’s northern regions.

It should be clearly understood that the major obstacles to building a sustainable peace in Mali are the political turmoil in the south and semi-permanent revolt in the north. But these are symptoms of a wider problem. There needs to be a culture of inclusive, participatory and constructive dialogue between all segments of society, in north and south, instead of the language of guns.