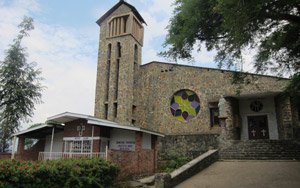 Kibuye genocide memorial (Image credit April Rinne
Memorialisation ... has a key role to play in preventing conflict, according to Williams Nkurunziza, the Rwandan High Commissioner
Memorialisation is the process by which societies affected by violence reflect on and preserve memories of their past. Public sites are often developed to help this take place, at monuments, museums and in community meeting areas. It often forms part of broader ways of helping people come to terms with and comprehend what has happened.

But memorialisation is about more than paying respects to the victims of past violence. It also has a key role to play in preventing conflict, according to Williams Nkurunziza, the Rwandan High Commissioner.

Nkurunziza was speaking at a panel debate on peace and reconciliation at the Commonwealth Secretariat in London. He was joined by Mirsad Tokaca, director of the Sarajevo Research and Documentation Centre, Dr James Smith, CEO of conflict prevention organisation the Aegis Trust, and Dr Stefanie Lehner, from Queen's University Belfast.

Nkurunziza highlighted the positive impact of memorialisation in the 20 years since the Rwandan genocide. He said it had been the basis for the country to move on from the legacy of that event, which left Rwanda needing to “pick up the pieces” of its fractured society.

Dr Smith emphasised the point. “Memorials play a huge role in and have to be the starting point for transitional justice. You cannot have prevention if you do not have knowledge and understanding,” he said.

And Nkurunziza says it has worked. Memorial sites and symbols in Rwanda, both in the capital and across the country, inspire people to do better: “As a society, as a nation, we dedicate ourselves to ensuring that a similar tragedy is not visited upon us. Every time we go to work we can remember how, at one time in the history of our country, society failed. But this has allowed healing and reconciliation to take place.”

Of course, there is more to memorialisation than just physical memorials, as chair of the debate and acting head of human rights at the Commonwealth Karen McKenzie pointed out: “It's also about archiving, digitising, ensuring access in the future to what happened in the past.”

And that access is crucial; if memorialisation is to help prevent conflict, societies must be confident and free to discuss its causes. Tokaca warned of the dangers of trying to establish a “monopoly of truth”, and of restricting that debate.

His organisation, which is documenting the Balkan war of the 1990s, has become a key independent source of information on that conflict. And Tokaca said that it was a “huge achievement” in helping to prevent the manipulation of statistics.

Reconciliation, he added, is “hard work”. But he too spoke of the power of remembering individual stories in order to demonstrate the cost of war and to “explain to victims that they are not forgotten.”

Speaking to Peace Direct after the event, McKenzie said that the discussion had "underscored that reconciliation takes many forms, and is much more than a series of legislative and judicial measures."

"Memorialisation provides an important unofficial counterpart for determining the truth," she added.

The debate followed an event in May which also considered reconciliation in the Commonwealth. During that discussion, the Secretary-General, Kamalesh Sharma, highlighted the need to recognise the key role of civil initiatives in building sustainable peace. In Rwanda, Bosnia and elsewhere, memorialisation is helping to do just that.