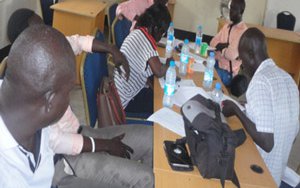 Edmund Yanaki, the Executive Director of Community Empowerment for Progress Organization, a South Sudanese peacebuilding organisation, recently spoke with South Sudanese journalists about a survey of Facebook use during the recent crisis in the country. The violence that began in December 2013 affected many parts of South Sudan and had a disproportionate impact in Juba, Bor, Bentiu, and Malakal. In light of the political crisis, the survey shows how the Internet, and social media in particular, was instrumental in facilitating the violence.

Yakani described how the South Sudan conflict has fostered a dialogue about the role of social media and networking as a tool for political mobilization towards regime change and pro-democracy movement. Yet despite the hopes that social media could be a force for peace, in this case social media was used to mobilise human suffering between ethnic groups.

CEPO’s study revealed that the majority of South Sudanese Facebook users at the height of the violence chose to describe the crisis as being based on ethnicity more than competition over political power. Facebook users looked at in the survey spread false information among communities, which had the effect of creating fear and panic, and may have led to violence. Three quarters of the accounts that were researched were found to be deeply involved in misinforming the public through fabricating facts.

Media was also manipulated to paint a false picture of events, for example an image of an Ugandan soldier believed to have been killed in Somalia was instead said to have been killed in Bor. A photo demonstrating the Lord Resistance Army killings in the Democratic Republic of Congo was fabricated to be a killing in Juba residential areas.

Despite this level of misinformation and negative campaigning there were active pro-peace voices making themselves heard on Facebook. When the two sides interacted directly it was often the pro-peace voices that outnumbered the pro-violence users.

Throughout the study, it was realized that much of the individuals who are pro-violence were mainly individuals with no direct political connection to the factions involved in the South Sudan crisis.

As the violence died down and efforts turned toward mediation, the majority of the users who were involved in instigating violence through Facebook began to withdraw from this activity and instead focused on justifying the facts and events that took place in the country – why did the crisis start, and who was to blame. Yakani lamented that the results of the survey suggests that Facebook has done less in promoting peace among South Sudanese, and much more to promote violence. While many social media users could have acted as ambassadors of peace, the survey showed that many chose instigating violence.

Yakani called on social media users to recognize the importance of Facebook and other social media, and that it needs to be used in a way that does not fuel or instigate violence. More help is needed to help people and communities better use social media, so that it becomes a promoter of peace instead of a driver of violence.