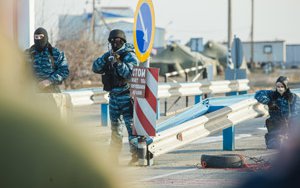 Local actors, based in and among affected communities year round, are best placed to understand the real needs of those communities before and immediately after disasters strike.

As evaluation efforts in the field develop, donors must be mindful that their money is not creating an elite group of organizations at the expense of locally led initiatives to repair relations in a way that makes sense for their people, their culture, and the history they have lived through.

Monitoring and evaluation of peacebuilding: the role of new media

New media is increasingly and often successfully used for needs assessments and beneficiary communication but only very few examples exist in which new media are applied for (improving) monitoring and evaluation in peacebuilding contexts.

The latest issue of the African Journal on Conflict Resolution, from ACCORD, includes articles that look at the role of women in peacebuilding in Mozambique, transitional justice in DR Congo, and art-based approaches to peacebuilding.

The causes and consequences of cross-border conflict in Kyrgyzstan

By Ian Litschko: Cross-border cooperation can be difficult in some parts of Central Asia. Ian Litschko discusses a recent incident on the Tajik-Kyrgyz border. Read more »

Youth, opportunity and conflict in Casamance

By Martin Evans: Martin Evans discusses some of the reasons for youth involvement in the conflict in Casamance, Senegal. Read more »

When theatre turns enemies into brothers

By Bryan Sims: Bryan Sims provides an overview of some of the causes and consequences of violence in Zimbabwe. Read more »

The importance of local peacebuilding in Georgia

By Freya Shaw: Freya Shaw explores the mechanisms of the EWER system that monitors and records conflicts, contributing to overall stabilisation of Timor-Leste. Read more »

Wearing tolerance around your neck: multi-faith symbolism in Tunisian jewellery

By Liz Resnick: In the middle of a turbulent year for Tunisia, Liz Resnick interviews a jewellery seller in Tunis whose work symbolises hope and harmony.Read more »

Conflict in Zimbabwe: prevention is better than cure

Building confidence across Kashmir through trade

By Ameya Kilara: Ameya examines the enduring trade between the Indian and Pakistani administered parts of Kashmir, despite political obstacles and an inconsistent peace process. Read more »

Pucks for peace in Ukraine

By Brian Canever: Brian Canever spoke to Olga Dolinina, who is using the popularity of table hockey to try and bring people together in UkraineRead more »