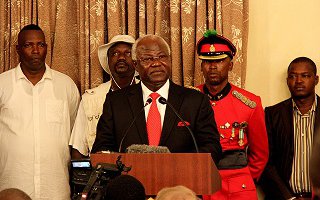 The current crisis, constitutionality and peace

A new crisis in Sierra Leone arose in March 2015, this time in the country's political sphere. On 17th March, Vice President Alhaji Samuel Sam-Samuna was sacked from his duties by the President, following an alleged request for asylum at the US Embassy. Samuel Sam-Samuna had previously been expelled from the ruling All People's Congress (APC) because the supposed asylum bid 'demonstrated willingness to abandon his duties and office as Vice President'. The dismissal has been challenged as unconstitutional and the sacked Vice President has sought redress from the country's Supreme Court.

The politics of Sierra Leone are on a dagger's edge, between constitutionality and peace. For many, the upholding of a constitution by the President is vital to peace - they are two sides of the same coin. The President's decision generated rising tension and has pushed the nation into a constitutional crisis.

The politics of Sierra Leone are on a dagger's edge
A week after the dismissal, a local protest organised by a group of young people assembled in front of the US Embassy in Freetown calling on the President to know that 'we fought for the restoration of constitutionality during the rebel war, and we are not ready to go back to those difficult years'.
The political crisis could have far-reaching consequences for the nation's economic growth. Image credit: Eduardo Fonseca Arraes

In the meantime, a court injunction request was tendered by lawyers of the sacked Vice President, asking the Supreme Court to restrain Sierra Leone's newly appointed Vice President - Victor Bockarie Foh, from performing his duties until a court decision is reached on 'whether the country's constitution gives the President power to sack his vice'. The court room was jam packed as lawyers swung arguments and counter argument around. Prosecuting lawyers challenged the decision of whether the President can unilaterally sack his Vice President without recourse to an impeachment procedure. A ruling was not reached by the judges, and the verdict has been deferred for an indefinite time.

The reaction of civil society

West African Civil Society Forum (WACSOF) works to create an avenue through which civil society organisations can engage with the national authorities, as well as the Economic Community of West African States . WACSOF view the constitutional crisis a unfortunate in light of the country's recent history. They perceive the country's ability to review this crisis as a serious test, and therefore urge that pressure be applied on all parties to the constitutional matter.

The West African Network for Peace Building has said that it is concerned about 'the growing tension over the sacking and appointment of holders of the office of Vice President'. They have proposed the establishment of a nine man committee that will serve as mediators and negotiators for peaceful resolution which will bring forth an outcome that will be mutually owned by all parties concerned. They hope that this will bring what they call 'this sad chapter' to an end.

From the perspective of the general public, this matter is seen as a litmus test for the country's judicial system. Delicate as it is, whatever decision is reached will be a judicial precedence that will run deep into the country's history.

Many people in Sierra Leone anxiously reference experiences from South Sudan, where a controversial dismissal of a similar nature has led to political instability. It is feared that the crisis will damage the significant gains made in consolidating peace and democracy since the end of the civil war.

The unresolved constitutional dilemma will have far-reaching implications for the future of the country if not handled with the delicacy it deserves.

[more_info_box] Insight on Conflict will soon be launching a new section on Sierra Leone, with updates and profiles of local peacebuilding work in the country. Check back to find out more.