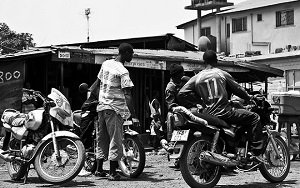 The civil war that ravaged Sierra Leone for a decade until 2002 was shaped by several complex factors. These include the centralisation of the national government, the marginalisation of youth, the trade in conflict diamonds, the role of Liberia, the use of child soldiers, and the intervention of both international private military companies and foreign governments.

After the war ended, international efforts supervised the post-conflict state-building process through a security sector reform (SSR) programme, and a disarmament, demobilisation, and re-integration (DDR) process. The UK-led SSR programme is often heralded as a state-building success story. However, it is important not to overlook the impact of the local processes which have had positive effects on peacebuilding in Sierra Leone in recent years.

The okada business was started as an informal venture
One of the more successful stories of reintegration in Sierra Leone is that of the motorcycle taxi, or okada, business. This was started as an informal venture by ex-combatants, enabling them to integrate themselves into society outside of formal DDR processes, by gaining employment as drivers of these taxis. The businesses rapidly developed to assume a more official status, through the creation of motorcycle associations and unions.

One of the most significant grievances held by young people in Sierra Leone before the start of the war was their feeling of marginalisation. And youth unemployment was rampant in the immediate post-war period. So the motorcycle taxi business has served to provide opportunities for ex-combatants to gain an income and a stake in the development of their country. Moreover, the business increases the mobility of the country’s population both within and between towns, aiding trade and the economy.

Whilst it is difficult to draw a direct link, the employment of ex-combatants in such businesses has been attributed to a decrease in crime in post-conflict Sierra Leone. It provides opportunities for the drivers to escape the effects of the gerontocracy which plagued Sierra Leone before the war. This prevented the youth from transitioning into adulthood without the help and support of elite and traditional authorities.

Local difficulties? Challenges to the industry

There are some drawbacks to the motorcycle taxi business. For example, drivers are sometimes financed by the older and wealthier members of the town. This reinforces the elite’s hold on the prospects for ex-combatants. Furthermore, working as an okada driver essentially means being grouped as an ex-combatant, with all the stigma that goes with the label. Drivers also tend to clash with the police and officials over licencing and traffic laws. Furthermore, the recent Ebola crisis has caused the government to put travel restrictions in place, harming business.

In this sense, the okada business represents both an opportunity and a challenge in Sierra Leone. The willingness of former combatants to pursue a life after the war is something that should be embraced and harnessed by local peacebuilders. With around 189,000 okada drivers in Sierra Leone as of 2013, their relevance to the peacebuilding process cannot be ignored. By continuing programmes that attempt to work through the petty conflicts between officials and okada drivers, the motorcycle taxi business can be pursued as a legitimate service that helps reduce the stigma surrounding the past of many drivers.

The taxi business is just one movement in a country that has faced numerous post-conflict issues
Search for Common Ground has helped to address the conflicts between okada drivers and officials in the city of Bo. It has instigated discussion between opposing parties, identifying poor communication and a lack of education about licensing procedures as the main reasons for tension between drivers and officials. After addressing these issues through collaborative meetings, conflict in the city has decreased. The experiences from Bo, and the methods used to address them, demonstrate that okada drivers can have a positive effect in society, and that the issues surrounding the business can be successfully addressed with help from peacebuilding organisations.

The motorcycle taxi business is just one movement in a booming country that has faced numerous post-conflict and development issues. Much work is left for local peace builders to address issues between the driver unions, officials and the general public. Despite this, the okada business is a story indicating how ex-combatants have been able to make a living after war, and how conflict associated with the okada business can successfully be dissolved. When looking to the future, and to other possible peacebuilding success stories in Sierra Leone, the story of the okada drivers is well worth remembering.

[more_info_box] Peace Direct will soon be launching a new section on Sierra Leone, with updates and profiles of local peacebuilding work in the country. Please check back to find out more.

Emily Dallas has research and academic experience on conflict and security issues in Sierra Leone.
Read more from Emily Dallas

Disarmament, demobilisation and reintegration (DDR)
Disclaimer: The views expressed in this article are those of the author and do not represent the views or position of Peace Direct. 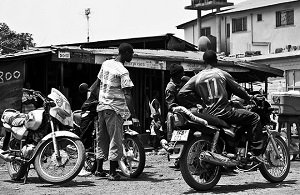