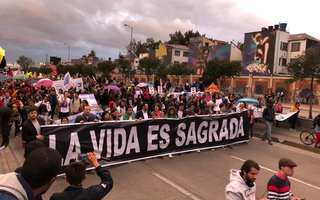 Peacebuilding in Colombia has a long history, and not all efforts in this field are linked to the current peace implementation process. Communities that have been victims of violence and armed conflict have developed different conflict resolution methods and non-violent actions, even during armed confrontation. Now, peacebuilding seems to be a trending topic in which Colombians are often viewed as complete amateurs. However, nothing could be further from the truth.

Bottom-up peacebuilding approaches are something that communities in Colombia know extremely well. When resilience is a concept born from their wide and varied experience, why do politicians, government, FARC (the Revolutionary Armed Forces of Colombia—People's Army) leaders, public opinion leaders and influencers act like they must tell them how to build peace? Why are they trying to sell new narratives about what peace means?

Bottom-up peacebuilding approaches are something that communities in Colombia know extremely well.

Today, civil society and community-based work is successful despite national leaders prioritising politics above peacebuilding, further exacerbating polarisation and instability. In the meantime, civil society takes on the real role of peacebuilders, sustaining the fragile peace taking shape in Colombia.

Former FARC combatants now located in Territorial Training and Reincorporation Spaces are the perfect example of those who have real experiences of war and atrocities and are more prone to work on conflict transformation. From being a part of illegal armed groups, they are one example of former fighters who have since become peacebuilders and have begun the process of reintegrating back into their communities, despite the lack of security, the increase of stigmatisation, and a lack of commitment from FARC leaders representing them at political level. Without ignoring the difficulties around this process and the concern about the increase of dissident groups, it has to be recognised that more than 10,000 ex-combatants are on the road to reintegration, and many of them are working to implement successful, productive projects. In addition, many of them have developed networks and relationships with the communities near to their Territorial Training and Reincorporation sites. Their commitment stands in contrast with the actions and decisions made by FARC leaders who have abandoned the peace process, as well as those who have promoted abandoning it, went back into hiding and/or those who presumably were involved in drug trafficking while benefiting from the peace agreement. FARC leaders have displayed great arrogance and little will to ask for forgiveness and reparations; the image they have projected has negatively affected people’s perception of the peace implementation process as they ‘personalise’ the whole negotiation process.

Without ignoring the difficulties around this process and the concern about the increase of dissident groups, it has to be recognised that more than 10,000 ex-combatants are on the road to reintegration, and many of them are working to implement successful, productive projects.

Civil society is experiencing an effervescent moment of social mobilisation. At the same time however, the authorities criminalise social protests and are currently pushing to formulate a bill that regulates the right to social protest. Regardless of the growing dissonance between government and civil society, civil society has maintained strong social mobilisation around sensitive issues, such as the killings of social leaders, the stigmatisation of social protest, and the protection of peace implementation. Their accountability has impacted the current government’s attitude and understanding about peace implementation. The killing of social leaders has become a topic of national importance, not because of political will but because people have mobilised against the lack of actions to protect them. During the last year civil society has organised more than 20 protests, symbolic events, mobilisations, as well as digital campaigns through social networks. All this noise has gained political gravity and the government has had to react to civil society inquires. Social mobilisation must continue.

Civil society has managed to develop different spaces for dialogue that encompass different points of view and ideologies. The political elite is taking on the peacebuilding debate either to demonise the peace process or to romanticise it, while civil society is exploring creative and innovative approaches to find common places beyond difference. Nowadays, initiatives such as Rodeemos el Diálogo, Improbable Dialogues, and Tómese un tinto con el que piensa distinto, among others, are being attended by intergenerational audiences that look to defeat polarisation. While dialogue efforts persist, peacebuilding will always be a reality and transformation of conflict has a chance.

Allowing and enhancing youth involvement and leadership in peacebuilding agenda:

Youth-led organisations are the real force behind the spread of social mobilisation for peace and their energy has also mobilised intergenerational movements to defend peace processes. Through innovation and creativity, youth-led organisations are still demonstrating that there is a huge section of society supporting the peace implementation process, connecting urban and rural initiatives to raise awareness of all the peacebuilding work and experience at the local level. I shared more reflections on youth and peacebuilding in Peace Direct’s report on this topic.

Through innovation and creativity, youth-led organisations are still demonstrating that there is a huge section of society supporting the peace implementation process, connecting urban and rural initiatives to raise awareness of all the peacebuilding work and experience at the local level.

Supporting independent journalism and research as a tool to prevent human rights violations:

So far one of the biggest challenges is dealing with the spread of fake news and the way it has contributed to polarising and dividing society. Politicians and high-level governmental officers in Colombia should take more responsibility around this. However, it is civil society who are working on advocacy initiatives to promote the responsible use of technology. They have created independent spaces to check and verify the information politicians and influencers share through their profiles, and they are promoting the use of independent journalism and research rather than classical media on topics related to peace, helping in this way to set alarms around possible human right violations.

Keeping in mind that peacebuilding work is still happening at the local level allows us to remain optimistic. Profound and solid transformations only occurs at this level.

At the time of writing, CNN published an interview with Sergio Jaramillo, one of the most relevant figures during peace negotiations between the FARC and the Colombian government. In his intervention, Jaramillo says peace is under threat due to political interests and short-term planning is prevailing. This is exactly the reason why those who are now leading the peace implementation process at the political level seem to be the true amateurs in peacebuilding, as is evidenced by way they have managed the peace agenda, polarising the country and personalising peacebuilding decision-making. Contrasting this disappointing performance from our governors and leaders, civil society is permanently contributing to safeguarding and promoting actions for real transformation. Keeping in mind that peacebuilding work is still happening at the local level allows us to remain optimistic. Profound and solid transformations only occurs at this level. Perhaps what we need to do more is ignore all the noise and continue working on what it is important. In the end, local peacebuilders are more than just amateurs.

Conflict prevention and early warning Disarmament, demobilisation and reintegration (DDR) Peace education Transitional justice and reconciliation Environmental peacebuilding Human rights Dialogue and mediation Governance
Disclaimer: The views expressed in this article are those of the author and do not represent the views or position of Peace Direct.