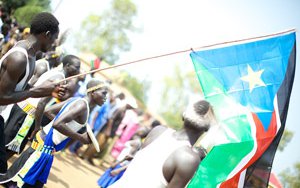 Since independence in 2011 South Sudan has been troubled by political rivalries which have often culminated in violence. Conflict, particularly amoung young people, has not been a proper chance to be resolved. The culture of South Sudanese political elites has suppressed dialogue and the seeking of truth, especially when compared to traditional mechanisms of resolving community disputes, which aim to bring people in conflict together. As such the culture of “hear and listen” is very low among South Sudanese people, which leads to mistrust and negative stereotyping.

Despite a widespread desire for peace, young people in South Sudan seem to be confused over how to set the agenda in order to bring people together and end conflict. The context is complicated, which often results in young people operating more as individuals than collectively, driven by the fact that youth leaders often find themselves working in tribal affiliations which do not reflect the spirit of building peaceful nation.

A recent workshop, organised by the Institute for Development of Civil Society South Sudan with support from Fredrick Ebert, looked at the role of youth in statebuilding and peacemaking. It was an exciting opportunity for young people in South Sudan to begin knowing their identity as people of one country and one nation.

Over two days the workshop called on the young participants to define an agenda and lay down strategies to make their voices heard during the upcoming elections. Young people should take the lead in advocating for justice and accountability to end the culture of conflict amongst themselves and ensure that democracy is realised for peaceful co-existence and national stability.

In my own view the youth in South Sudan, and Africa at large, need to lead the agenda for peaceful coexistence in relation to statebuilding, with focus on some key areas and strategies the following points.

Reconciliation and conflict prevention should be built around community negotiations aimed at undermining the drivers of the conflict and it should be done through the local authorities. Communities often listen more to traditional leaders than political leaders.

For South Sudan and Africa to reduce conflict, there must be a policy put in place to allow learning and exchange among and between students in secondary schools and universities, giving them the chance to discover different communities and different ways of living.

National debating clubs and theatres need to be put in place to analyse avenues of peaceful coexistence. All the youth across the country should be able to organise and meet, to deliberate on how best to bring peace and prosperity to their nation.

Traditional cultural clubs should be built in the main cities of South Sudan. An example of this is the Abyssinia Cultural Club in the Ethiopian capital, Addis Ababa, where many citizens go for entertainment. Such places act as role models for youth to begin thinking positively, and change their mindset away from one of violence.

Artists and musicians should be motivated by the government and private companies to promote peaceful coexistence amongst youth and communities through art, helping to spread a message of mutual cooperation, love and unity.

The government of South Sudan should introduce a subject of peace studies – beginning in primary schools and continuing through to higher education. This will help develop the mentality of the upcoming generation with knowledge and skills of peaceful coexistence.

"Coexistence Research Centers" should be established across the country for the purpose of documenting previous peaceful agreements, and research practical initiatives to promote values of peaceful intercultural coexistence leading to advocate for regional peace in South Sudan.