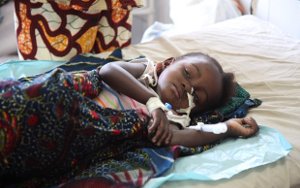 Acute malnutrition is a major public health problem across the DRC. However, this young girl was one of the lucky ones – her mother referred her for treatment before it was too late, and she recovered fully. Photo Credit: World Vision UK

When five-year-old Martine arrived at the health centre in the Equateur Province of the Democratic Republic of Congo (DRC) she weighed just nine pounds due to severe acute malnutrition and her ribs were clearly visible.

“We realised that Martine was really sick when the colour of her hair had completely changed. She could not even eat. We tried to take her to the hospital, but we didn’t have enough money to ensure her healthcare,” her father, Martin Zakola, explained.

Just at that time World Vision was registering children in its sponsorship programme. Her case was reported by a volunteer to the World Vision office in Gemena, capital of the Sud-Ubangi District of Equateur Province, and then Martine was transferred to a health centre that would take care of her properly.

After two weeks of hospitalisation, Martine was able to recover her health through ingesting specially-designed formulas. “We used milk-based formulas to enable effective nutritional recovery due to their high protein and nutriments. We also gave her porridge made from soya,” explained Alima Issa, the nurse who cared for Martine. When she left the hospital, Martine weighed more than 28 pounds. While she was being treated, her parents were trained on improving child nutrition.

The DRC is one of the biggest countries in Africa, occupying a land mass roughly two-thirds of the size of Western Europe. While the country has an estimated £15 trillion worth of mineral wealth beneath its fertile soil, more than 40 per cent of its children under five are chronically malnourished.

In some ways, chronic malnutrition is even worse than acute malnutrition because unlike Martine, a child who is malnourished over a long period will be stunted for life. Neither their bodies nor their brains will be able to develop properly leaving them unable to undertake complex or physically demanding work in later life, thereby trapping them in poverty.

Part of the reason for the gross inequality in the DRC is that the country is experiencing the world’s deadliest conflict since the Second World War, in which disease, malnutrition and murder have killed nearly 5.4 million people since 1998.

There are many factors which are fuelling the long-running war. Neighbouring countries have been accused of participating in the conflict.  The wider international community stands accused of having neglected the world’s worst humanitarian disaster and repeatedly failing to intervene decisively. The political leadership within the DRC is often either inept or corrupt, or both.

One of the most critical factors in the DRC’s continued failure to develop are the private individuals and governments who have plundered the DRC’s mineral resources for their own profit, effectively stealing what should be the biggest endowment for Congo’s children.

But in spite of the myriad problems facing the country the situation is far from hopeless. There are ways of working on both a large and small scale to turn the DRC’s fortunes around.

For example, international pressure is being brought to bear from organisations like theExtractive Industries Transparency Initiative which promotes revenue transparency and accountability in the mining sector, and exposes unethical practices and tax evasion.

To help young girls like Martine, World Vision works closely with the National Nutrition Programme (PRONANUT) in Gemena, which undertakes education and training in local communities. It also refers cases of malnutrition to the relevant health authorities.

Two local organisations, ‘Women Organized and Integrated Home’ and ‘Family Development Foundation’ organise culinary training for mothers, to help them with cooking food for infants and children using local produce and products which are available to all families. The children are invited to partake in the eating of the food cooked by their mothers. Thereafter the mothers are asked to apply the good practices they have learnt in their homes.

When Martine’s father brought her to the local health centre last November, he said: “We are making efforts, despite our limited resources, to find good food, tomatoes and peanuts. Every morning we do our best to give them (the children) porridge with sugar.” Martine’s mother, Ekila, added: “Since leaving the hospital, she (Martine) is healthy because we insist much on (her) diet. I don’t want to see my daughter suffering again.”

I visited the DRC last month in my capacity as chair of the Global Campaigns Management Team for World Vision’s Child Health Now campaign. One of the key components of Child Health Now is the Citizens Voice and Action (CVA) initiative. Whilst this is only the start of the campaign in the DRC, in the Afghanistan, another war-ravaged country, where the campaign was launched earlier it has already shown some real gains.

When World Vision began a CVA project in Ghor province in Afghanistan, the local community did not have a single trained midwife in an area the size of Leeds in the UK. After training in CVA, people in the province lobbied local government officials and there are now 200 midwives being trained across western Afghanistan. Midwives are crucial to preventing death in childbirth and protecting children, so the change is significant.

Recognising the importance of local empowerment in the DRC, World Vision is actively supporting the Children’s Parliament – a project created in eastern Congo by children and run exclusively for children to teach and defend human rights. Their mission since its inception in 1999 is to fight for the rights of children in the DRC.

Strengthening national government capacity is also a key component in promoting lasting change. While I was in the capital Kinshasa I was encouraged to participate in a meeting with the ministers of health, gender and education – all working together to promote child health in the DRC.

The Minister of Health, Dr Félix Kabange Numbi Mukwampa, told me how important it was for the DRC to sign up to UN global frameworks so that the government would have recognised accountability benchmarks to check and demonstrate progress. He also endorsed World Vision’s role in helping to develop responsible citizens through the Children’s Parliament.

Following my recent visit, I am more than ever convinced that it is through a combination of local, national and international action that lives will be transformed in the DRC. It is time we stopped dismissing the country as being beyond hope. With the right political will and support there is a great deal that can be done. 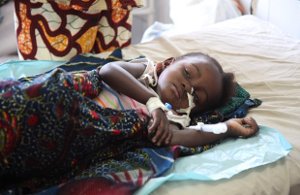