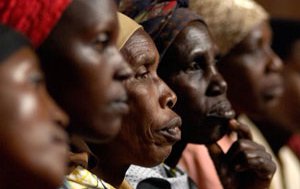 Post-genocide Rwanda has been marked by efforts to rebuild the social fabric which was destroyed during the terrible events of 1994. To coordinate efforts of reconciliation the government established the National Unity and Reconciliation Commission (NURC) in 1999. The NURC is a permanent body, protected by the constitution with a mandate to promote national unity and reconciliation in post-genocide Rwanda.

To decentralise its work and avoid a top-down approach, the NURC established “forums for reconciliation” in all of Rwanda's 30 districts. A reconciliation forum can be here understood as a gathering of people from all parts of society with the purpose of promoting reconciliatory initiatives, especially at the community level.

This approach was developed as a way of ensuring permanent consultations with the grassroots and regularly interacting with local communities. The forums were also intended to bring together many different people in reconciliation and encourage local people to own the process of reconciliation.

In addition, the establishment of the forums was expected to contribute to improving coordination and avoid duplication of reconciliation efforts in Rwanda, strengthening capacities of partners in reconciliation, and establishing mechanisms of sharing information and resolving conflicts.

The forums are composed of representatives drawn from many different sectors of community life. These representatives can include NGOs, religious leaders, young people, and the military, to name but a few. The district forum is coordinated by a committee of 10 -14 people elected by the members.

The observations from the members of such forums indicate that these district forums, if they could be well prepared and equipped, are able to effectively coordinate the reconciliation related activities of community leaders, local and international NGOs and government.

Although some may see this as another form of control on the part of government and suspect some political calculations and interferences, those involved in the district forums have described it as a helpful mechanism to coordinate reconciliation related activities in the community. They have also found forum meetings a space for open and critical dialogue, which is a compulsory element of the process towards genuine reconciliation and sustainable social cohesion.

The need to reinforce the forums for reconciliation

At the national level, Rwanda has made some impressive achievements in the process of reconciliation.  However, reconciliation at level of the community and individual still faces significant challenges.

A recent series of workshops which brought together the representatives of district forums demonstrated the pressing need to reinforce the capacities of the district forms to enable them to achieve their purpose.  Participants identified a number of issues.

Lack of coordination between the forums and local leadership was a particular concern. Participants questioned the existing partnership and weak collaboration between the forum, district, and sector leadership. They deplored the fact that, in many districts, the active involvement of local leaders is almost non-existent. They also said that leaders who form the forum for reconciliation have little time to meet and, for some of them, realized the lack of ownership and spirit of voluntarism among the forum members.

Another serious challenge raised by the participants is the lack of capacity, such as transport, means of communication, and training materials. Moreover, there was a concern that representatives for the reconciliation forums are not trained for what is expected from them.

To respond to the challenges and ensure the effectiveness of the forum, the participants formulated a number of recommendations including:

As reconciliation is about restoring destroyed relationships among people, the role of the forums at the grassroots is essential in moving the reconciliation process from the national to community and interpersonal levels. The forums require much more investment in order to ensure that an infrastructure able to accommodate and facilitate reconciliation is effectively established at grassroots level. Rather than attempting to create new structures we need to use and strengthen existing forums for reconciliation.