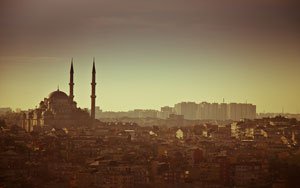 In March 2015, Syria’s civil war entered its fifth year. The results of the conflict have been catastrophic for the country and its society. It is estimated that seven million Syrians have been internally displaced and over three million more made refugees, mainly in neighbouring countries including Lebanon, Jordan, Iraq and Turkey.

After four years of conflict, Turkey is one of the few countries which still has an 'open-door' policy. According to UNHCR, almost two million Syrian refugees are currently living in Turkey. Of those, 220,000 are in 22 camps along the border. They are all currently at capacity. But many of them have tried to restart lives in different cities across Turkey.

Istanbul: a home from home

Istanbul is home to more than 300,000 Syrians
Istanbul is home to approximately 330,000 Syrians. Most of them didn’t choose Istanbul randomly. They have family or friends that arrived months or years before them, who can offer support with housing, networks and other matters. It is also the economic center of Turkey, making it an attractive place not just for those that want to search for a job, but also for those with ambitions to start businesses.

Nizar, 25 years old, is among those seeking a new start. From Homs, he arrived in Istanbul last October. A computer engineering graduate, he left Syria with three job offers, including a position at the UN and Red Crescent.

“Syria became a dangerous place for young men. Together with my parents I took the decision to move to Istanbul, where a friend recommended me for a job position”. After a Skype interview Nizar was accepted for the job and after five days of travel, passing 20 check points between Homs and Aleppo, he arrived in Turkey.

During his first month in Istanbul he was living in the office, with another friend, before he was able to find a house. He lives there with a friend and a cousin, who just arrived in Istanbul to search for a job. He had no contract and his income was half of what a normal programmer would earn. At the beginning of this year he left the job. “I decided, together with a friend, to open my own business. Now we are trying to sign a contract with a company in Saudi Arabia, if everything goes well we will have money to legalise the business after this contract”.

Syrians from many different backgrounds are rebuilding their lives in Turkey. Some intend to stay. Image credit: Christopher L.

While he doesn’t have this money, he uses social media to work and offer his skills as a programmer. Nizar says that he could try to migrate to Germany, where he has an aunt, but he doesn’t want to be a refugee. Therefore he is now investing money and time to learn Turkish, a crucial skill to succeed in Turkey according to him, and a sign that Turkey will be his home from now on.

A different story is that of Ahmad. He came to Istanbul in 2012, after the ambulance in which he was working as a volunteer was hit by a bomb, near Aleppo. He stayed for three months in a hospital in Istanbul. Here he met his current business partner. They teamed up to open a tourism agency. He had the money and his partner had the network and knowledge to run this kind of company. The agency is a success and he had started to invest in different businesses. Less than one month ago he became partner in a Syrian restaurant in Istanbul.

The idea now is to register the firm and officially employ the seven Syrian employees working there. He says that “officials from the municipality pass by sometimes, but when they see that it is a Syrian business employing Syrians they are not so strict with the rules”. Nevertheless, he wants to legalise the business as soon as possible, so he will be able to move on and open more branches of the restaurant in other neighbourhoods.

The situation of Syrians in Turkey is no longer seen as temporary by the Turkish government
Both Nizar and Ahmad try to help other Syrians in their own way. Nizar is planning to organise a traineeship for Syrians with technical education to prepare them for the labour market in Istanbul. This is a future plan that will depend on the success of his company. Ahmad is already helping other Syrians. In his restaurant he employs just Syrians and he will keep doing that in the future branches of his restaurant. This is a way to help other Syrians and it makes the communication between employer and employee easier, since they speak the same language.

However, the difficulties faced by Syrians are more numerous than imagined. Social tensions between Syrians and Turkish have increased. On the one hand, there are the Syrian refugees that feel that their basic needs (employment, healthcare and education) are not being met, on the other hand there is the Turkish population that since 2011 has seen rent increases and competition for jobs as consequence of the arrival of Syrian refugees.

At first, the Turkish government defined Syrians as temporary 'guests'. Turkey and the international community believed that the conflict would come to an end soon, and Syrians would be able to go back home. Besides that, labelling the Syrians in Turkey as guests rather than refugees implies less responsibilities for the Turkish government towards Syrians. Recognising Syrians as refugees implies many obligations for the government such as providing healthcare and housing, not to mention labour and education opportunities.

This is beginning to change. The situation of Syrians in Turkey is no longer seen as temporary but permanent by the Turkish government, which is progressively increasing the rights of Syrian refugees. A new Temporary Protection (TP) regulation came into effect in the end of 2014. This new regulation guarantees Syrians with the right to a TP identification document and access to services, such as health, education and entry to the labour market. It is still unclear, however, how much access to education and the job market will be guaranteed. These issues are being debated, with more information expected after the general elections in June.

(The names in this article have been changed in order to protect the identity of the respondents).

Pedro Valarini is in the last year of his Master's degree in Sustainable Development at Utrecht University. He recently spent several months in Istanbul, conducting research on the experiences of Syrian refugees in Turkey.
Read more from Pedro Valarini 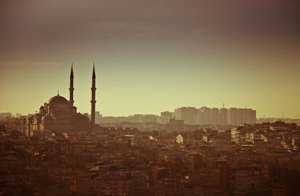