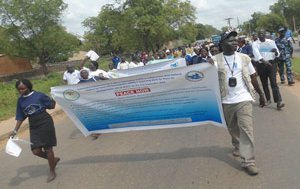 Earlier this year the South Sudan National Platform for Peace and Reconciliation (SSNPPR) demonstrated the commitment of the inhabitants of South Sudan’s capital, Juba, to bring peace to their country.

Around 400 people joined the Walk For Peace in the capital on 21 September, rejecting the violence that erupted following the crisis of December 2013. They were joined by a police band and representatives from local and international civil society, including the UN Mission in South Sudan, the UN Development Fund, local organisations, local schools and artists. They sang peace songs and called on their political leaders to end conflict in their country. One student from a primary school said simply, “enough.”

Those who couldn’t be there in person sent text messages of support. “Dear beloved husbands and sons,” said one woman: “if you keep killing us, who will you marry?” “This nation is too young to be destroyed by war,” said another.

As the programs kicked off in the Nyakuron Cultural Centre, powerful words and speeches drove some people to tears as they called for peace in South Sudan. Speaking to the audience, Gondalleezza, a primary school pupil said, “peace is a vital tool and we should handle it with care like a glass. My fellow country mates, we wouldn’t like to shade more tears or blood any longer. My ears are blocked with the sound of bullets, Let us love ourselves and be in peace.”

Matee, another primary school pupil explained peace as safety, and non-violence, and called upon the older generation to teach young people about peaceful ways to build a new nation.

Another women, Guliba, lamented that during International Day of Peace she didn’t know whether to mourn or celebrate because children were not in school, women were suffering in displaced peoples camps, and the number of widows is increasing as a results of this internal crisis. As mother she appealed to the leadership to stop the internal crisis and bring peace back to South Sudan.

In what seemed like a direct message to the warring parties to abandon any plans they may have for military victory over their adversaries, His Grace Archbishop Daniel Deng Bul of the Episcopal Church of the Sudan, said during the peace event that our people are tired of war and bloodshed. The Archbishop called upon the leaders of the two parties in conflict to listen the voices of the ordinary Citizens who are the victims of crisis.

The march was a success and demonstrated the bravery of South Sudan’s people in the face of continuing violence. The SSNPPR intends to organise more peace walks, more marches, and more events. For it to work effectively, academia, international organisations, local groups, activists, musicians and artists need to project their voice as one.