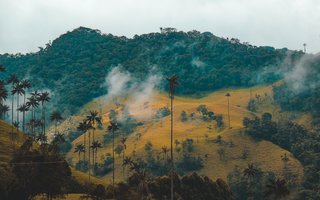 Dialogue is a critical element in any peace process. Without it, the necessary agreements and negotiations between opposing sides are impossible. Dialogue is more than a tool: it is a behaviour and mindset that helps to ensure conflict transformation. It is also complex - requiring skills such as active listening, assertive communication and, of course, empathy. The near absence of dialogue currently across peacebuilding efforts in Colombia risks halting these efforts entirely.

Dialogue is more than a tool: it is a behaviour and mindset that helps to ensure conflict transformation

Nowadays, peacebuilding in Colombia relates not just to the peace agreement signed between the Colombian state and the former guerrilla group, FARC. It goes beyond the quality of governance the country requires to achieve sustainable peace. The agreement and the possibility of peace have opened up opportunities for a more dynamic and healthier social mobilisation – demanding changes to the structural failures within our political, social, and economic system. This is the reason why continual dialogue and negotiations are needed now between different social and political sectors.

Despite civil society making use of different spaces to be heard by the government,there is still a growing feeling that the government is acting like an impenetrable wall; lacking in empathy or flexibility, and remaining disconnected from Colombian communities and their needs during the COVID-19 pandemic. Sensitive issues, such as the implementation of the peace agreement, the stigmatisation of social protest and the increase of violence – evident in the increasing number of massacres occurring at the territorial level – have shown that the institutions lack the ability to maintain democratic dialogue and effectively transform conflict.

Different sources have flagged the slow rate of implementation of the peace agreement. Even when recognising some important advances towards peace, there is still a need for a more integrated implementation. In addition, commitments to implementing the Territorial Approach Development Programs (PDET) - the planning instruments included in the final agreement to implement economic and social structural changes in the regions affected by the armed conflict - are also slow to advance. Moreover, the formulation of the PDET implied a strong participatory component, and communities at the local level worked together to identify initiatives oriented toward improving economic and social development. However, there is a feeling within communities that there was a low level of inclusive participation during the formulation phase of those plans (shared during an interview to a communitarian leader from Catatumbo, Abril 2020). Every time the government has been confronted about this, its response has been to deny the critics, using data and results to show that participation did in fact take place.

In early September, accusations of police brutality provoked protests and riots in Bogotá. Protesters were shot at by police officers and more than 10 young people were killed. Civil society demanded a response from the government and called for structural security reform, given that security forces have regularly been implicated in human rights violations. Instead of showing a more conciliatory attitude towards social discontent, the government and the Attorney General’s office decided to criminalise social protest. While civil society was mourning the victims and videos circulated showing police officers shooting and killing young protesters, the President was seen visiting police stations wearing a police uniform - a poorly timed visit that seemed to stand in support of the police. This ended with the Supreme Court of Justice issuing a ruling asking the Government to guarantee the right to peaceful protests and demanding responsibility for the abuses by police during the marches.

In early 2020, the Paro Nacional took place, one of the biggest national strikes ever to take place in the country. In response, the government implemented what they called the Conversación Nacional, or National Conversation. It was possible there to listen to civil society proposals and needs in relation to different social, economic, and environmental issues. After months of conversation, the government turned the dialogue exercises into reporting sessions used to present and validate results at a management level, while removing any opportunity for further dialogue and consensus with civil society. The opportunity to build upon effective participative democracy, or to act on the recommendations made, was therefore missed.

An agenda for youth now

Throughout this tumultuous period, civil society actors have centred their efforts in demanding for more spaces for dialogue, denouncing violence and calling for the attention on the governance crisis that affects Colombian society.

Initiatives such as Movimiento Agúzate por la Vida y la Paz (Movement for Action and to Defend Life and Peace) and AgendaJovenYa (Youth Agenda Now) mobilised collective action to promote spaces for dialogue and activities to denounce violence against young people and the criminalisation of social protest. They also focussed their efforts on increasing awareness on the importance of involving youth in plans and programmes at the policy level in order to achieve structural transformation at the community level.

Movimiento Agúzate Por La Vida y la Paz was an initiative that reunited different social leaders and citizens representing all the Colombian territories. Through dialogue, they built a safe space for activists and people less used to participating in protests to meet and share their outrage for the killings, while demanding respect for life and greater efforts to implement the peace agreement. They called for a post-lockdown social mobilisation, asking protesters to use measures to stop the spread of COVID-19 during the march. Even when the number who gathered was reduced due to the pandemic, those involved still disseminated messages through social media  promoting social protest as a political right.

Through dialogue, they built a safe space for activists and people less used to participating in protests to meet and share their outrage for the killings, while demanding respect for life and greater efforts to implement the peace agreement

Likewise, AgendaJovenYa is a youth-led initiative whose aim is to call for more cohesive and strategic long-term action that includes all the initiatives promoted by youth. Adapting its methods to take place virtually due to the COVID-19 context, AgendaJovenYa spoke with nearly 60 participants from diverse political backgrounds to identify short, mid and long-term actions for youth to become agents of social transformation. The methodology and its results were relayed to the Presidential Counsellor for Stabilisation and Consolidation of Colombia, Emilio Archila, to open dialogue opportunities and identify coordinated actions to strengthen the active participation of young people in the implementation of peace.

In addition to the two initiatives mentioned above, another more recent example of community-led mobilization took place in early October. Indigenous communities came together for La Minga (meaning voluntary or community work). On this occasion the work took the form of a non-violent demonstration march from Cauca to Bogotá where indigenous communities walked to the capital city to meet the President and call for actions to protect social leaders, human rights, and peace efforts. They had invited the President to join them in dialogue in Cali, however the government did not make an appearance.

An opportunity to exchange views

A low disposition for dialogue may deeply affect democracy and governance. That is why it is urgent to see this turbulent moment for peace as an opportunity to embrace innovative practices that enhance democracy and strengthen governance. There is hope though.

Advocates of AgendaJovenYa have found a clear opportunity using dialogue to get the Presidential Counsellor for Stabilisation and Consolidation to work with them. The hope is that these conversations will strengthen both the political agenda of youth in Colombia, and the consolidation of the PDET at the territorial level. Dialogue has allowed them to identify common interests to work together to train youth from the territories so they can become leaders of PDET processes. By mid-October a national call was launched by Agenda Joven Ya and more than 1000 young women and men from all the territories – PDET territories included – attended the call to be part of this exercise. Such level of coordination and straightforward communication between a civil society initiative and the government has had no precedent and was possible thanks to the willingness of both parties to dialogue.

That is why it is urgent to see this turbulent moment for peace as an opportunity to embrace innovative practices that enhance democracy and strengthen governance. There is hope though

Even when it feels like talking to a brick wall, we must remember that walls are also porous. They let in water and sound, can be torn down, and ultimately transformed. Just like water, dialogue too can seep through tough surroundings and mindsets in order to create change and break down barriers.