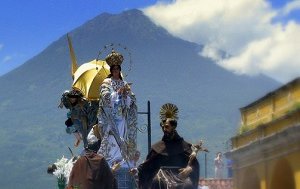 Antigua, Guatemala. The country has seen an increasing number of vigilante killings, partly the result of inequality and frustrated ambitions. Image credit: Roberto Urrea
A spread in lynching in Guatemala has caused alarm
Citizens across the Americas have been asserting themselves recently. Mass protests spurred by corruption fatigue toppled the Guatemalan president. Protestors in Honduras, also weary of rampant corruption, carried torches and choked Tegucigalpa’s streets last summer. Villagers in Guerrero, Mexico took up arms and declared themselves independent from either the army and drug cartels. At the same time, researchers and policymakers are at last viewing ‘ordinary citizens’ less as victims and more as key agents in shaping their daily lives, whether around food security, their children’s welfare, or their community’s safety and security.

From the Peruvian Highlands to rural Mexico, citizens have been especially capable in carving out an independent, less violent reality, even under conditions of protracted violence and weak states. But in Guatemala, so-called “lynchings” (linchamientos) – or spontaneous and violent vigilante justice – has quietly persisted amid the protests and more internationally-contentious drug crime. The creeping geographical spread and now increase in lynching in recent years has caused alarm among human rights organisations. It requires soul searching by citizens themselves going forward.

The Guatemalan state has been remarkably unwilling to invest in basic social services
Perhaps most puzzling is that a lynching is violence perpetrated on victims by neighbours, in small, otherwise cohesive communities. The tools used – bricks, bats and gasoline – are often those available to citizens usually preoccupied with their own small-scale agriculture, or by running their small businesses, such as vehicle shops or serving hot food. Mobs form quickly and 'justice' is meted out in minutes, without a modicum of due process. Consequently, many innocent victims have succumbed to the anger and violence of their neighbours, before things abate and life returns to normal, on the surface at least.

As I have noted elsewhere, the drivers underlying lynchings in Guatemala are poorly understood, and conflicting information persists. It was assumed that war-torn indigenous communities were most susceptible; lynchings being borne out of frustration with state authorities, or an effort to assert greater cultural autonomy. Warranted frustration does persist, but indigenous-dominated municipalities in Guatemala are among the least violent in Central America by homicide rates.

Instead, I argue, lynchings are in some part a function of seemingly immovable rates of inequality, and the bitterness of rural poverty and frustrated ambitions. Despite recent gains against corruption, the Guatemalan state has been remarkably unwilling, criminally so, to invest in basic social services and essential human development programs. But lynchings create new problems: they deepen insecurity, sow new social cleavages where none should exist, and make community action over other challenges – from education to climate change adaptation – more difficult to accomplish.

What citizens can – and must – do

Communities have the tools to confront the challenge
Citizens are victims of their environments – inequality, as I’ve argued, along with an anaemic criminal justice system and corruption by local elites (now exacerbated by political parties) enable these violent outbursts. But despite the failings of the state, citizens themselves must be the most proactive in clamping down on lynchings. And it is possible: So 'ordinary citizens' have exhibited courage and strength throughout the Americas of late – demanding justice and tacking corruption. In Guatemala, the lynching phenomenon puts forth a fresh challenge, however. Citizens are both part of the cause and the answer.

While the state must reform and progress, it will be slow at best. Communities, meanwhile, have within them the tools to confront the challenge. Outside assistance could be valuable, but should first honour and coordinate with local nodes of power and agency, working within these parameters to end lynchings, so communities can unite against their shared challenges.

Matt Klick is a Postdoctoral Research Fellow at the University of Denver. He has conducted extensive research on post-conflict peacebuilding in Guatemala.
Read more from Matt Klick 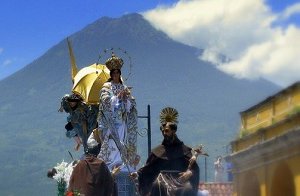