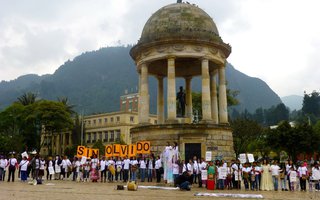 Sitting on a desk somewhere in Havana is a nine-page document entitled “Peace Cannot Exist Without Women.” Complied by over 250 women’s rights activists from all regions of Colombia, it contains recommendations on land reform for the peace negotiations between the FARC and President Santos’ government. Excluded from both negotiating teams, Colombian women are mobilising to combine advocacy efforts, create platforms for debate and have their voices heard in the process some hail as the country’s best chance for peace in over half a century of bitter civil war. The authors of the report are part of a collective called Mujeres por la Paz (MPLP)(Women for Peace), created by activists, civil society organisations and non-profits such as my organization Liga Internacional de Mujeres por la Paz y la Libertad (LIMPAL Colombia), at the start of the negotiations. They have organised marches for peace, panels with senators to discuss gender justice and two-day discussion forums to create a common women’s agenda.

The government peace negotiators, however, have avoided taking a victims-based approach towards ending the war, instead favoring a peace-based approach that aims principally for the cessation of hostilities. In the context of land reform, perhaps the most complex of the five subjects for debate (the majority of the war has taken place in rural areas), this is preventing the negotiators from addressing key factors that cause violence and displacement, greatly limiting the potential impact of the talks and continuing policy that ignores and disenfranchises Colombia’s most vulnerable citizens.

The government has officially banned any discussion of the country’s economic model at the negotiating table. This was in part an effort to learn from the mistakes of past peace processes that were overwhelmed by the enormity and complexity of the conflict, losing focus and failing to achieve concrete results, limiting the talks to a strict five-point structure. The reluctance to talk about development, however, also stems from the fact that Santos’ widely celebrated National Plan for Development (NDP)(2011-2014) directly correlates economic development with increased peace, democracy and “prosperity for all.” The plan allocates mining and energy 44 percent of government investment, while agriculture receives 2.2 percent. In many ways this has led to growth in Colombia and to unprecedented levels of international recognition and interest. Real GDP grew 5.7% in 2011 with inflation at 3.7%. In April 2012, TIME magazine featured the President Santos on the cover of their international edition with the title: "The Colombian Comeback: From nearly failed state to emerging global player -- in less than a decade."

Having this discussion does not mean flatly condemning economic modernisation and increased industry. The MPLP report instead demands that large-scale development be subject to full and meaningful systems of monitoring and of accountability for the damage they have done, while support for small and medium scale farming is increased. This means financial assistance in the form of subsidies and debt forgiveness and also a physical presence to assure the security of lands. They write that a unitary vision of development as macro-industry ignores the value of small farmers but also the value of women’s work, whose relationship to land and production is vastly different from that of Glencore or Eco Oro.

The official mechanisms for engaging civil society in the peace negotiations serve more to legitimate the process rather than to change its content; the nine-page MPLP document will most likely make no impact. However, if the negotiators are able to achieve a ceasefire this would still be a phenomenal achievement, a first step towards rebuilding the lives of those who have suffered displacement, loss and violence. It is therefore the role of civil society during and beyond the talks in Havana to remind political powers of the limitations of their policies and articulate alternatives, to keep championing a victims-based approach to peacebuilding that combats corruption, inefficiency and structural weaknesses as obstacles to social development, and that demands basic human dignities and rights for those who have no voice. Building peace in Colombia will be a long and immeasurably complex process. While the world’s gaze is fixed on Havana, it is worth remembering that the contributions and actions of civil society will be equally as instrumental in achieving long-term peace, justice and reconciliation for the Colombian people.

Elizabeth Donger is an activist working in Cartagena for the women's rights group LIMPAL Colombia, supported by the Charles P. Howland Fellowship for public service. Her work includes research with the London-based charity Reprieve on human rights issues within the "war on terror" and advocacy with the Iraqi Refugee Assistance Project in Jordan.
Read more from Elizabeth Donger

Development Women, Peace and Security
Disclaimer: The views expressed in this article are those of the author and do not represent the views or position of Peace Direct.

More on Development and Women, Peace and Security → 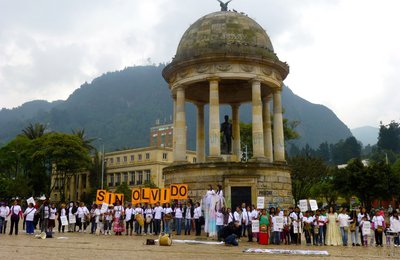