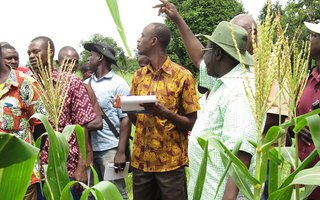 Based in Burkina Faso, ABAC's work consists of promoting human rights and combatting gender-based violence, and supporting farmers and herders to build the skills, resources and techniques to effectively manage land-related conflicts and develop land dispute resolution methods. Their peacebuilding activities include training, facilitating dialogue, producing information materials in local languages, and working with local governments. ABAC spoke to us about how their activities, and their reach has bloomed since winning the Peace Direct Tomorrow's Peacebuilders Award.

How did the Tomorrow’s Peacebuilders Award help to support your work and activities?

The prize awarded by Peace Direct has been invaluable for us to carry out our projects and has allowed us to consolidate our action on the ground, as well as reaching new areas. Since receiving the award, we have been able to greatly extend our forum theatre activities, which help communities gain more understanding of land dispute resolution methods and human rights issues, and to create dialogue. They were initially intended to just cover one village in the Fada district, but thanks to this additional financial support we have been able to extend the forum theatres to Natiaboani and Kikidéni villages, where conflict between farmers and herders has frequently flared up. Our forum theatre activities have now involved over 500 people, with many participants and many spectators coming to watch the theatre workshops. The forum theatre method has encouraged participants to discuss topics where they might previously have struggled to be vocal, including forgiveness, education and dialogue, non-violent approaches to conflict, mutual respect between farmers and herders, and respecting the law in farming areas.

Receiving the Tomorrow’s Peacebuilders Award has also allowed us to restart our radio activities, which we had to discontinue due to a lack of funds. In 2017 we were able to put out 12 radio programmes each lasting 30 minutes. The reach of the shows’ broadcast spanned to as much as 80km, meaning that we have significantly increased our reach among the public.

The forum theatre method has encouraged participants to discuss topics where they might previously have struggled to be vocal...including non-violent approaches to conflict, mutual respect between farmers and herders, and respecting the law in farming areas.

How has receiving the award made a difference in the community?

80% of the population in Burkina Faso are directly dependent on natural resources for their livelihood, which means that conflict frequently flares up between agriculturalists and herders. Encouraging people to have respect for natural resources and good environmental management in the community are crucial for our organisation. Through the wider reach of our theatre and radio activities, which was made possible with the support from the Tomorrow’s Peacebuilders Awards, we feel that people are now more informed, educated and have more awareness about how environmental conflict can be reduced and peace can be built. Since 2016 we have continued to see a gradual change in the behaviour of participants which is increasingly visible and demonstrates their tendency to seek positive peace and resolve conflict collaboratively between herders and farmers. Souleymane, a herder, noted: “from what we have seen and discussed, each farmer and herder needs to take the decision to change the way we proceed. We belong to the same family, only our activities are different.”

The wider reach of our activities means that more people in the communities we work in can see how making peace and resolving land conflict is not just possible, but a reality already for many. As groups involved in the forum have previously been drawn into conflict regarding the lands they live and work on, the forum is a fitting environment to help the community to understand how to react better to instances of violence when they do flare up, by responding in non-violent means. Our theatre sessions do not deny the existence of violence, but always seek to establish non-violent responses for when conflict flares up over land and agricultural issues. One of the theatre sessions addressed the theme of developing precautionary measures and self-defence, where farmers shared information on ways to keep their fields secure and prevent attacks from herders. The conclusions were unequivocal: every shepherd needs to take responsibility if their animals cross into another farmer's field, and everyone must be on guard to signal if even one farmer falls victim to violence. The forum theatre gives farmers, herders and spectators the chance to take their positions and perspectives, and to offer apologies and forgiveness. Those watching can give their opinion on the scenes acted out, and any issues that are portrayed during the session.

Souleymane, a herder, noted: “from what we have seen and discussed, each farmer and herder needs to take the decision to change the way they proceed. We belong to the same family, only our activities are different.”

What has this done for your organisation?

The strengthening and spreading of our forum theatre method has also led to increased exchanges with other regional organisations elsewhere in Burkina Faso and Niger who share our aims of bringing about peace in their communities.  We have now visited and worked alongside Culture Art and Humanity, the National Commission for Human Rights, Action for Economic Development and Entrepreneurship, Non-violent Conflict Management (GENEVICO) and several other NGOs. These exchanges have enabled our own experiences and projects to be shared, but also to strengthen our knowledge and capacity on important areas relating to peacebuilding, such as the role of women in prevention and managing conflict, and democratic approaches to land management. The discussions we had with other organisations brought suggestions for wider dialogue, such as testing the ground to explore the possibility of cross-border action in the construction of peace and democracy.

With the radio programmes reaching further and wider, we have been able to forge a connection between the local radio stations close to Fada N’Gourma, such as Fada FM and the Eastern Burkina Faso Broadcast. Now, a much wider public can hear the messages and the activities of our organisation, and it has also encouraged local leaders to emphasize reconciliation and conflict prevention. According to journalists from the radio stations, a high number of listeners called to get involved after hearing the programmes we put out. This would not have been possible without the support from Peace Direct’s Award, and we are delighted to see our activities, and the belief that peace is possible, continuing to grow.

The strengthening and spreading of our forum theatre method, has also led to increased exchanges with other regional organisations elsewhere in Burkina Faso and Niger who share our aims of bringing about peace in their communities.

What words of advice would you give to current applicants?

I would encourage applicants to stay true to the work really being carried out on the ground, and to incorporate living testimonials that are genuine, concrete and relevant. I would encourage them to set clear, simple, realistic and achievable objectives, that are aimed at developing new ways of working, whilst strengthening successful actions. Finally, if successful, it is important to remain faithful to the original aims of the peacebuilding activity and see that it is executed as planned, and that it benefits those it was intended to support.

If successful, it is important to remain faithful to the original aims of the peacebuilding activity and see that it is executed as planned, and that it benefits those it was intended to support.

We are accepting applications for the 2018 Tomorrow’s Peacebuilders Awards until 12th June 2018. To find out more about our other previous winners, and to apply online, please visit our website.

Environmental peacebuilding Dialogue and mediation Sustainability
Disclaimer: The views expressed in this article are those of the author and do not represent the views or position of Peace Direct.