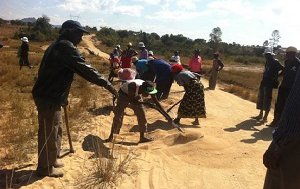 The nhimbe concept has been used to repair infrastructure. Image credit: Edward Chinhanhu.
“The recent elections, as the preceding ones, left communities divided and torn asunder”
The traditional concept of nhimbe runs deep in Zimbabwean culture, not just among the dominant Shona but the entire nation. Loosely translated, the term means ‘community collaboration’. While it had lost its place due to changes in agricultural technology, massive urbanisation and a disruption in agriculture in recent years, the concept has resurfaced. This time it is not only confined to farming, but other areas of people’s lives as well.

At the root of nhimbe is the idea of communities coming together, joining hands to fulfil a task. In the past, the tasks ranged from preparing lands for planting to winnowing large harvests for storage in the granaries, amid merry tales and drink. Naturally, the platform was also a perfect occasion for old foes to settle their grudges and forgive each other. Accusations were laid bare, rumours verified, suspicions allayed and other forms of communal discord dealt with. All this was done in a fun, jocular and all-inclusive manner, such that at the end of the day, none went home burdened but refreshed. To this end, a nhimbe was not just a forum for ‘many hands making work light’, but also for peacemaking, conflict resolution, peacebuilding, early warning, and conflict prevention.

Recently, Heal Zimbabwe, an organisation working on national healing, has revisited the nhimbe concept and begun to apply it in its peacebuilding activities, in particular in parts of the country affected by political conflict. “The recent elections, as the preceding ones, left communities divided and torn asunder,” said Rahid Mahiya, from the organisation.

Using Local Peace Clubs that it helped establish in these communities, Heal Zimbabwe has been using the concept since 2013. In July 2015, the organisation joined communities in Headlands district and carried out two collaborative projects.

Community development as a result of the nhimbe

The nhimbe also provided an opportunity for community members to discuss conflict issues affecting their communities
Members of Tasimuka Peace Club joined hands with community members in Ward 12 and repaired a road that stretches from the Hwedza - Rusape highway to Chikuse Business Centre. This road serves more than 30 villages in Headlands. The road repair was attended by Headmen and village heads, along with 52 ordinary villagers, more than half of whom were women.

In Ward 10, Domborembizi area, members of Kubatana Kune Pundutso Peace Club brought together community members from Ward 10 to work at St Cassian Secondary School in Village 25B. St Cassian School is a new school that is under construction. Forty-four villagers helped clear the school site and collected stones for builders to prepare the first stages of construction. Upon completion, the school will serve more than 26 villages in Headlands Ward 10.

In Chadereka community in Muzarabani, Ward 1, some 35 community members converged in August 2015 to preach a message of peace by hosting a nhimbe where they made preparations to construct a dam. The people came from four villages: Hove, Chitengu, Mutasa and Mvundura. With the climate wreaking havoc, the communities sought to construct a dam wall along Kanyenze River to preserve water beyond the rainy season. The dam is a source of water for livestock for the four villages, in an area which records low and erratic rainfalls. The nhimbe was also attended by three traditional leaders who are customarily responsible for maintaining communal peace and conflict resolution.

Bringing people together for one reason, they also serve another - promoting peace
In both cases, the villages have been known for violent clashes between political opponents, particularly ZANU PF and MDC supporters. However, on the nhimbe days, people from different political groups converged to pursue a community development. Bringing people together from diverse political parties, the nhimbe also provided an opportunity for community members to discuss conflict issues affecting their communities, as well as the National Peace and Reconciliation Commission (NPRC), which is constitutionally mandated to build peace and promote national healing, reconciliation and integration.

Similarly, Headlands Constituency usually records high cases of human rights violations during election periods. In these examples and others, communities had an opportunity to do a conflict mapping exercise where they identified various conflict issues in the area and came up with possible solutions to attain sustainable of peace.

In Tsholotsho North Ward 1, Isolezwe Peace Club members met and organised a clean-up campaign at Samahuru Clinic which serves the local community. The nhimbe was attended by 48 community members. Local teachers and headmasters attended. Observers in the politically sensitive area have noted that the work of the Club has brought tolerance and peaceful coexistence to the people, with the nhimbe allowing them to discuss mutual topics.

The nhimbe, or community collaborative platforms, therefore have a key purpose. While bringing people together for one reason, they also serve another – that of providing an opportunity for community members to talk, and promote peaceful coexistence, conflict mitigation and peacebuilding efforts.