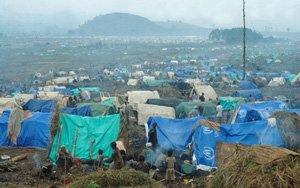 Rwandan refugee camp in east DR Congo, 1994
Twenty years on, the memory of the 1994 genocide, pervasive across Rwanda’s thousand hills, lingers on well beyond the country’s borders. It extends into the surrounding region where it is remembered as a shocking and unforgettable event.
Last April, the world commemorated the twentieth anniversary of the infamous genocide that tore Rwanda apart in 1994. In only one hundred days, hundreds of thousands were brutally killed there in one of the worst massacres ever recorded in human history.

July 4 marked the end of a long mourning period which started in Rwanda three months ago. During the past hundred days, Rwandans have been mobilised, this year as every year since 1994, to participate in a multitude of commemorative activities organised all across the country to remember the genocide and its victims. Throughout this period of remembrance, the old and the young in Rwanda have come together to reminisce on the violent past that deeply scarred the nation. They have shared countless stories of unspeakable violence, of miraculous survival and of heroic resistance.

Twenty years on, the memory of the 1994 genocide, pervasive across Rwanda’s thousand hills, lingers on well beyond the country’s borders. It extends into the surrounding region where it is remembered as a shocking and unforgettable event. “It was the cruellest genocide of all times in Africa and we all have to remember it so it will never happen again,” a young Burundian in Bujumbura affirmed when asked about the tragic events that occurred in neighbouring Rwanda two decades ago.

Across the border, Rwanda is widely admired for having been able to bring to a close such a dark chapter in its history and to move towards a brighter future. “Now the past is behind them,” a young Burundian in the central town of Gitega said. “Rwandans have tried to rebuild their country together in the best possible way, developing at great speed,” a Congolese boy in Goma further explained.

Young people in the region look with astonishment at their neighbours’ impressive progress. Rwanda is seen by many as an example to follow, with a great number believing there is much to be learned from this small nation’s ability to rise from the ashes of death and destruction.

Rwanda’s neighbours respect its visible headway, yet also share the concerns, often voiced by critics of the current government, about “the lack of total freedom” in the country and the perpetuation of simmering ethnic tensions among the population.

While some praise Rwanda’s current government for having managed to unite the nation by putting ethnic differences aside and by focusing on the future, others denounce an alarming situation of ethnic injustice. Reflecting on the current state of affairs in neighbouring Rwanda, a young Congolese in North Kivu affirmed that, “today, power belongs to the Tutsi, who still treat the Hutu in a demeaning way”. A solution to the ongoing tensions, according to one of his peers, would be the promotion of dialogue and ethnic equality in Rwanda “so that the people who find themselves abroad can finally return home”.

The legacy of the 1994 genocide in the Congo

In eastern Congo, many people see themselves as having borne the brunt of the Rwandan conflict that followed the genocide. They reminisce on the catastrophic impact that the 1994 genocide had on their lives.
The effects of the genocide in Rwanda reverberated across the entire region, especially in neighbouring DR Congo. In the wake of the genocide, hundreds of thousands of Hutu refugees, including armed génocidaires now organised as the FDLR, poured into the country to escape the advancing Tutsi-led rebellion that stopped the genocide in Rwanda and took power in 1994. Since then, millions have died in the Congo as a result of war and mass violence.

As Rwanda commemorates the 20th anniversary of the genocide, many Congolese today remember the legacy of this tragic event in their own country. In eastern Congo, many people see themselves as having borne the brunt of the Rwandan conflict that followed the genocide. They reminisce on the catastrophic impact that the 1994 genocide had on their lives. “The genocide in Rwanda touched us as well,” a young Congolese from Walikale said. “It makes us suffer today because of the FDLR who terrorise us and who are pursued here by the Rwandan army”.

Pleading for a peaceful solution to the Rwandan conflict which still deeply affects them, Congolese in the war-torn Kivu region decry the decision of the Rwandan government to continue “its” war against its Hutu opponents on Congolese soil after 1994. A young girl in Rutshuru recounted how, “after having chased their rivals out of Rwanda, they continued to look for them here in our place and they made us suffer too”.

Rwanda is accused of having pursued an aggressive agenda in the Congo by brazenly invading the country during the two Congo Wars in 1996-1997 and 1998-2002, as well as by secretly relying on “brutal” rebel movements, notably the CNDP and the M23, who are widely reported to have committed horrible abuses against civilians along the border. “Rwandans like to invade our country under a false name, but I know that it’s Rwanda that is the main actor of everything that has been taking place here in the Congo,” one girl in Sake pointed out.

Rwanda’s military intervention in the Congo, justified by its leadership on security and humanitarian grounds, is bitterly denounced today by the area’s inhabitants. Its memory lingers in the minds of Congolese living close to the border. In the Kivu region, the Rwandese are often labelled as “aggressors” and “invaders”. They are believed to have demonstrated what a youngster from Masisi described as a “spirit of conquest, expansion and domination” towards the Congo during the last two decades. “Our province of North Kivu has known several wars because we live next to countries that want to expand, especially Rwanda,” one boy in Goma affirmed. “These foreigners tirelessly try to occupy us and to drive us away”. And one youngster in Kiwanja stated: “They have been killing the population, stealing and smuggling the rich resources of the Congo into Rwanda, looking for fertile lands for their cows, wanting to dominate us and to annex the Congo to Rwanda.”

Hostility towards Rwanda seems to be rife among many young Congolese in North and South Kivu.Having grown up knowing little else other than conflict and deprivation, some among them openly expressed their readiness to take up arms to defend their country from a threat of Rwandan domination and occupation. “The Rwandese are my enemies,” one pupil in Rutshuru town declared. “They want to take my Congo and I will fight them if I need to”.

Twenty years after the 1994 genocide, the Great Lakes region remains highly unstable. Rwandan Hutu militias continue to destabilise the region, supposedly with the support of Congolese forces. Tutsi rebellions, recently disbanded, are at the same time believed to be regrouping in Rwanda to launch a new attack into eastern Congo. Earlier this month, tensions escalated as troops from both countries assembled along the border after gunfire broke out.

In the midst of bilateral altercations, people in the Kivu's continue to suffer and hope for an end to the insecurity to which they have long been subjected. “Enough is enough,” a young Congolese in Rutshuru declared; “it is time for everyone to commit to stopping the violence and restoring peace in our dear country, which has been abandoned to the mercy of unscrupulous profiteers”. This umpteenth call for peace deserves to be heard; it urges an assumption of responsibility and robust collective action for the sake of stability and peaceful coexistence in this war-torn region of the world.

Dr Denise Bentrovato is a post-doctoral researcher and a focal point for Africa at the Georg Eckert Institute for International Textbook Research in Brunswick, Germany. She has specialised in the history and politics of the Great Lakes Region.
Read more from Dr Denise Bentrovato

Democratic Republic of the Congo Rwanda
Disclaimer: The views expressed in this article are those of the author and do not represent the views or position of Peace Direct.

Latest from Democratic Republic of the Congo and Rwanda → 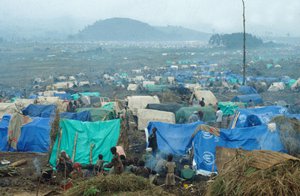