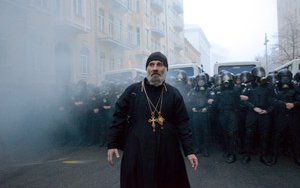 By the time I reached the country in July 2014, Crimea had been annexed by Russia, and armed conflict was taking place in the east. The participants with whom I spoke were generous with their time and appreciative of the interest from ‘outside’. They shared their life stories, current experiences, and hopes for the future, for themselves, their families and their country. This provides a crucial insight into Ukraine’s struggle today, as well as clues to nation-building in Ukraine and other struggling countries.

Independence and history – views from east and west

When asked about independence itself, all participants in both studies said they had voted for it in the sudden referendum of 1991. All but one man from the west said they had been thinking about and hoping for Ukraine’s independence. Given western Ukraine’s history of freedom fighters, I was surprised at this anomaly.

In contrast, none of the men from the east said they had considered independence prior to the vote; rather, some had been focused on how to change the Soviet Union. My own experience as a counsellor for trauma survivors meant I knew that a key element needed to move to strength after trauma is creating a relatively clear vision for the future, and then identifying concrete steps to move towards that vision. How could people move towards democracy if they had not thought about democracy, or what a democracy might look like?

The men’s relationship to their own history was also conflicted. There were experiences common across regions: a strong connection to family, and a sense of responsibility to them and to friends; pride in good higher education – yet the necessity to work multiple, menial jobs; flexibility and adaptability; an almost unshakeable determination; and a tremendous sense of humour, most often dark and ironic.

A return to the past?

Participants were adamant that there is a role for everyone in building the country
While all of the participants reported voting for independence and initially losing much economically, only one man from the east voiced any hint of regret for change from the Soviet system. This same man said that intellectually he knew independence was the right choice for Ukraine, but with times as tough as they were for himself and his family, rose-coloured glasses of nostalgia for a relatively simple youth were tempting.

Considering the past, many men from the west were critical of what they viewed as a sense of nostalgia for Soviet times, seemingly evidenced in numerous statues of Lenin in city squares. They were more impatient to move on to the future. Some men from the east criticised their western brothers for not appreciating their shared history. They were worried that if it were not acknowledged, their own lives and histories would be minimised or diminished. One scholar said a shared Ukrainian future could be built only if the foundation of the past was acknowledged, warts and all. All participants were clear that armed conflict is “barbaric”. Men also spoke about the importance of upholding laws and boundaries for the country to survive. Many mentioned a regret that Ukraine’s military was not stronger – at least to the point of being able to present an appearance of being able to defend its borders, in order to be taken seriously.

The need for accountability

All participants in both studies were clear they wanted a shared future – a united Ukraine – and they liked the EU style of living. However, they were also clear that Ukraine is a separate country; a one-size-fits-all approach will not suffice to honour Ukraine’s history and culture or to build a strong future. All spoke passionately about the need for strong, honest leaders schooled in business as well as politics – not in power because of historical connections to the party.

Participants were also adamant that there is a role for everyone in building the country that is Ukraine. They said that each individual citizen must become involved in civil society, holding leaders accountable – something that is only beginning to happen in Ukraine. They suggested that roundtable discussions should begin at all levels, including the grassroots, bringing people together to share their visions of how to build a new Ukraine.

Presently, more than 1.3 million people have been displaced within Ukraine – people who have left the remains of home and family to seek sanctuary in the west and south. Despite so-called cease-fires, armed conflict continues, with wildly differing estimates of casualty numbers. All participants voiced deep gratitude that outside nations had offered some help – and concern that help must continue. At the same they were clear that with outside support, solutions must come from within Ukraine. Ukrainian voices must inform a Ukrainian peace.

Maureen Flaherty is Assistant Professor of Peace and Conflict Studies at the University of Manitoba, Canada. She is the author of Peacebuilding With Women in Ukraine: Using Narrative to Envision a Common Future.
Read more from Maureen Flaherty

Ukraine
Disclaimer: The views expressed in this article are those of the author and do not represent the views or position of Peace Direct. 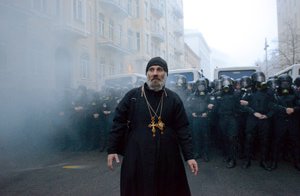