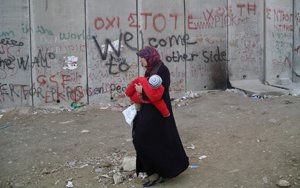 Despite living through conflict every day, the voices of Israeli and Palestinian women are rarely heard. Image credit: Union to Union/Monica Hallberg

If women ruled the world, we would have no wars. This is a statement that many of us may have heard. Whether true or not, we cannot know presently, as women get comparatively little stage time on a global scale on matters of war and peace.  The struggle of equality between men and women is, sadly, still a relevant topic nowadays and especially so in the context of conflicts.

The lack of women and their voices is reflected in the number of women in charge of political decisions and policy making and the number of women holding managerial positions in peace NGOs – both crucial aspects that affect women’s participation and role in matters pertaining to the Israeli-Palestinian conflict.

At the same time, the voices of Palestinian and Israeli/Jewish women are only occasionally listened to through media filters attempting to use these for political purposes that strip all honesty away from what was initially said.

Voices from the ground

"Many Israelis think that I am a threat to Israeli society, and that is being a traitor in a way. I am not part of them."
Yael is one young woman who has published her story through the project: “Every time there was a suicide bombing, in Haifa at least, I would instantly send an SMS to my family to tell them I was OK. After hearing the news of every suicide bombing I would see others next to me do the same or make these same “I am OK” phone calls."

The closest it got to me was the “Bus 37” attack in Haifa, which was where I lived and where I grew up. As a teenager I worked in a bakery. One day I heard yet another “boom”, and I knew. This time it happened just 50 meters away from me, right outside of the bakery.

What did I do and think in the moment it happened? In the split-second when I heard the “boom”, I didn’t fear for my life or anything like that. I didn’t really think that much actually, or maybe I did, but I don’t remember it. I just acted, and so did others, very quickly.” (From Her Story #1, Yael)

Another contributor, Rima, explores the complexity of identity and belonging through her testimony: “It’s really not easy being a Palestinian in Israel, because I am considered a traitor on both the Israeli and the Palestinian side.

Many Israelis think that I am a threat to Israeli society, and that is being a traitor in a way. I am not part of them.

On the other hand, I am also a form of traitor in the eyes of many Palestinians, although now many Palestinians outside of Israel do understand the important role that I have in terms of supporting the "Palestinian cause."

But I feel privileged and guilty anyhow. I have an Israeli passport and a "teudat zehut" [Israeli ID] meaning I can go almost anywhere I want unlike Palestinians living in Gaza or in the West Bank.” (From Her Story #2, Rima)

Iltizam Her Story #24 takes a picture of her village Budrus in the West Bank. Image credit: Iltizam.

The political is personal

Political is Personal (PiP) seeks to give Israeli and Palestinian women the space and opportunity to tell their story, from the ground up. When founding the initiative, I wanted to show how the conflict affected women in a direct and indirect way.

To address the conflict and all its complexities, as well as all the complexities revolving around its peaceful solutions, it is imperative that we listen to these voices from the ground – particularly if we try to seek a genuine peace solution reflecting the needs and expectations of everyone living the conflict, men as well as women.

In order to reach the voices of ordinary (while at the same time extraordinary) Israeli and Palestinian women, I interview women from within the Green Line (Israel), the West Bank and Gaza – face-to-face or via email, Skype, phone or chat, depending on what circumstances allow.

The interviews are in-depth, open and as non-edited as possible, conducted in a non-judgmental and comfortable environment, allowing each woman to feel free and secure talking about experiences that oftentimes are uncomfortable or controversial to talk about. Political is Personal is an outlet for women to channel their voices to whoever is listening, whilst including nuances that are often belittled or ignored.

More focus needs to be given to the voices of women living in conflict, and this is the purpose of the stories published
The United Nations Security Council Resolution 1325 adopted in 2000 was an essential milestone and for the first time recognised the need to address conflict and its peaceful solutions by focusing on the role of women, a concept that was adopted by the UN in 1995 through the Beijing Platform for Action. The importance of women’s participation and voices within the context of conflict, war and peace were valued officially for the first time.

The principles of UNSCR 1325 are a significant motivation for the PiP initiative. Much more focus needs to be given to the voices of women living in conflict, and this is the purpose of the stories published.

With 29 stories published so far, PiP seeks to reach a wide audience, from online readers around the world, including Palestinians and Israelis, to scholars, think tanks and decision makers who influence the status quo in the region.

In the long term PiP seeks to replicate the personal narrative methodology in other regions, and to interview women within other conflict zones. It is not possible to understand or address the complex realities of conflict, not reach a genuine peace if the experience of women living the conflict on the ground are not heard. Listening to them is the first step.

Sarah Arnd Linder Sarah Arnd Linder, a francophone Jewish Dane, has lived in Israel for ten years, studying Government, Conflict Resolution and Middle Eastern History and is familiar with many of the peace and human rights NGOs in the region. Sarah founded Political is Person in April 2015 in order to create a platform for Israeli and Palestinian women’s voices to be heard.
Read more from Sarah Arnd Linder

Israel and the Occupied Palestinian Territories

Culture, media and advocacy Women, Peace and Security
Disclaimer: The views expressed in this article are those of the author and do not represent the views or position of Peace Direct.

More on Culture, media and advocacy and Women, Peace and Security → 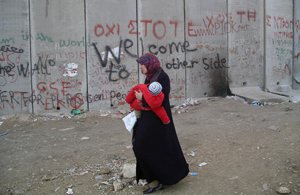