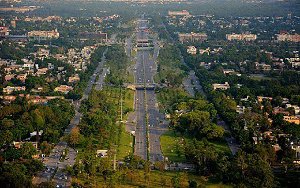 Pakistani capital Islamabad. The Red Mosque in Islamabad has been involved in supporting radicalisation, according to a new documentary film.
Image credit: Obaid747.

I recently watched a new feature documentary, Among the Believers. As I returned home, the faces of 12 year old Zarnia and Talha - featured in the film - haunted me. Elected governments, military dictatorships, justice, society and humanity have failed to secure the lives of so many Zarinas and Talhas in Pakistan.

And in so failing, “A vacuum was created. Religion filled that vacuum for it is only Shariah and Jihad that will deliver us from oppression.” That is what Maulana Abdul Aziz, an extremist cleric from the Red Mosque, Lal Masjid, in the Pakistan capital city Islamabad has said.

With the FBI investigating the possibility of links between Abdul Aziz and Tasfeen Malik – one of the killers in San Bernadino – documentary makers Hemal Trivedi and Mohammad Naqvi are showing their new film, which portrays the growth of Islamic fundamentalism in Pakistan.

The shame is ours, for abandoning people like Tariq
Zarina and Talha are many of the victims of madrassas (religious schools) that preach Jihad and the concept of a utopian Islamic Ummahi, or caliphate.

But this story is not just about Tasfeen or Abdul Aziz. This story is about the trap into which thousands of marginalised, underprivileged and those seeking refuge fall, ‘because a vacuum grew wherein only a radical interpretation of religion as the only ideological platform capable of mobilizing the vulnerable, insecure, disempowered grew’.

It is also about people like Tariq, the local village head in Beni Behkh, who in an act of resistance to extremist ideology runs a small modern education school to salvage the futures of people like Zarina.

He is fighting a lonely battle. As the film demonstrates, the chilling reality of Pakistan is powerful. But the shame is ours, for abandoning people like Tariq. How often do the media share stories of resistance and courage like his?

In the documentary, Zarina rejects the restricted environs of the madrassa, jumps over its wall, returns home and begins attending Tariq’s secular school. Her father refuses a lucrative marriage proposal for her. But when Tariq’s school is threatened with closure, her father gives in to social pressure and she is married off.

Then there is Talha, from Azad Kashmir. He is thoroughly indoctrinated. He refuses to leave the madrassa even though Musharaf’s military cracks down on the cleric. He confesses in the film that “No, I don’t understand the meaning of the Koranic verses that I am reciting. We only have to memorise it by heart.”

What is happening in Pakistan cannot be uncoupled from the decline in universal ideals and rise of identity politics. Adding to this are the deadly external political and military interventions as in Afghanistan, Iraq and Syria, unresolved disputes like Palestine and Kashmir which are presented as ‘holy causes’, and global social and economic upheaval.

All of this supports those using revivalist religious rhetoric to try and bring about a caliphate. Those who do not know where to turn for answers are ripe for radicalisation by organisations like the Red Mosque, which aim to train children to devote their lives to war.

With incredible access into the schools and its leader Maulana Aziz, the film shows how radicals are making thousands of children pledge their allegiance to ISIS.

What surfaces in the film is that while radicalisation uses poverty and illiteracy as scapegoats, it isn’t about that. It's about a sense of supremacy, power, ideology, revenge and identity. Poverty, marginalised groups and a lack of political coherence is the perfect recipe for terrorist recruitment.

Jihad for the soul of humanity

"There are many kinds of Jihad in the world. The one for peace is one of them"
Trivedi and Naqvi are contributing to a vital conversation about Pakistan and the forces shaping it and the Muslim world. Trivedi explains how she went to Pakistan with a deep anger after one of her friends was killed in a terrorist attack in Mumbai

“I had lot of questions. I don’t know if they have been answered, perhaps they melted in the wake of what I saw. If we want to win this war then clearly we know that people of Pakistan, though they turned a blind eye to the growing menace, are now themselves victim of it. And we need to support them”.

If the Taliban made it into power, she adds, “India will have to deal with the biggest refugee crisis” ever, with potentially 50 million of Pakistan’s population leaving the country.

This is the new story of our region. Those who want to win the battle against the extremists of the world have to come together to wage jihad – for the soul of humanity. We have to support Tariq and those like him, and not allow their voices to be drowned in the indoctrination of violent extremists. As Tariq says in the film, “There are many kinds of Jihad in the world. The one for peace is one of them.”

[more_info_box] Among the Believers is screening in London today at the Human Rights Watch film festival, and will be showing around the world in 2016.

Conflict prevention and early warning Culture, media and advocacy Development Peace education Dialogue and mediation Atrocity prevention
Disclaimer: The views expressed in this article are those of the author and do not represent the views or position of Peace Direct.