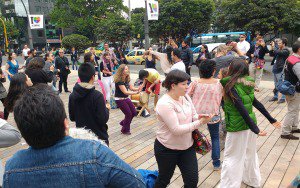 People in PazMov celebrating the ceasefire agreement. Image credit: Lina María Jaramillo
During the last four years the confidence and patience of civil society has been heavily tested
Dancing is how one group of people welcomed the first day after the Colombian government and FARC rebels announced the “bilateral and definitive” ceasefire, a historical agreement that will lead the country towards a conclusive peace agreement.

As soon as news about the agreement was announced, social networks spread the invitation to an improvised street dancing performance as a way to welcome the first day of peace in Colombia. The initiative, called PazMov was organized by the political scientist and 5rithms-dancing teacher, Carolina Rudas. The aim of this exercise was to receive this historical moment with positive energy and hope, leaving behind all the fears and anxiety after years of mistrust, insecurity and violence.

The performance was held in two central points in Bogota. People started to congregate at the Chile Avenue Square and an hour later met in the city's downtown area. With the sound of drums people of all ages, not professional dancers, had the chance to celebrate through spontaneous movements showing joy and promoting the message that this was the day Colombian civil society had for years been waiting for, the end of armed conflict.

This event without a doubt reflected the positive spirit following the announcement. Peace dialogues have been anything but easy and during the last four years the confidence and patience of civil society has been heavily tested. Putting aside the romantic and idealistic perspective of this peace agreement between the government and FARC, Colombia needs more than just a signed settlement. The big challenges of peacebuilding are only just beginning. A full understanding of the pivotal role of civil society in making sustainable peace a reality will be one of the challenges ahead.

Civil society has an important role in consolidating the political efforts of the last four years
The most relevant aspect in the third point of the peace agreement, is the definitive ceasefire. This will establish 23 designated zones, where FARC combatants will be monitored for six months under the UN-verification mission to start a demobiliszation and reintegration process. This process aims for disarmament, the complete destruction of guns and the establishment of security warranties for FARC ex-combatants.

In addition, both sides agreed that this peace treaty would be endorsed via referendum. This is the first time in Colombian history that a peace settlement will be validated by civil society, which is why it will have such an important role in consolidating the political efforts of the last four years.

After the endorsement of the agreements, civil society has to be empowered to hold it accountable, and ensure the fulfillment of all aspects agreed during the dialogue. Civil society must work on its knowledge about what happened. It must demand reliable information to build the memory of violence in Colombia as an effective mechanism of reparation and education for future generations.

This peace treaty was signed with only one armed group and different regions are still dealing with paramilitary groups, organised crime and another guerrilla group, the ELN. Therefore, civil society has to be more involved in non-violent activism to diminish the impact of groups that could be a menace to the security of areas where post-conflict projects are likely to be implemented.

Civil society must work to change a mindset caused by years of radicalisation if one of the goals of peace is to give place to ideas such as reconciliation and forgiveness and if reintegration processes are to succeed. Beyond this, Colombia needs to build a political culture of peace. This means promoting a political culture against the traditional patronage system, which is strongest in rural and remote areas, as well as promoting new leadership at regional and national level. These new leaders must be fresh, promoting different and more inclusive approaches to democracy and socioeconomic development.

Peace in our time?

Maybe that's the spirit civil society needs to reinforce, the spirit of solidarity that made everybody go out to dance
Peace in Colombia means it is time to re-build our nation. This is a huge task so we need the commitment of civil society to it. While people were dancing and celebrating this new positive step towards peace, a lady told journalists she was not directly affected by the armed conflict, though she knew war was devastating for so many people and left so many victims. She was there celebrating not just because of her, but because of them.

Maybe that’s the spirit civil society needs to reinforce, the spirit of solidarity that made everybody go out to dance. Now the chance is closer than ever, and peace must be equally important to everyone.