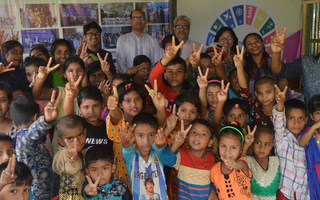 Across the political spectrum, people are organizing demonstrations for the days following November 3rd. There are mounting fears about the threat of electoral violence. It speaks to the proactive and resilient character of American civil society that so many organizations have joined to create nonpartisan coalitions to prevent and mitigate any potential electoral violence. In such times, Americans must remember that, while this kind of political uncertainty is unfamiliar in the U.S., there are people who have long been addressing such concerns. We can learn from the past and ongoing efforts of local peacebuilders working to prevent and mitigate electoral violence around the world.

Prince Charles Dickson, a Nigerian peacebuilder, believes that the current efforts of “only informing voters of the basic procedures of voting, or asking people to desist from violence, is insufficient to change behavior.” Dickson calls not only for greater transparency in the election process but for a clearer set of consequences should there be evidence of electoral violence or tampering. Wisconsin’s Attorney General Josh Kaul has emphasized that not only does the state have a monitoring system but that should anyone be violent, there will be consequences. Unfortunately, this kind of clarity has not been systematically implemented across the country. Rather, President Trump’s messaging has served to further tensions and distrust in the electoral processes.

Preventing electoral violence at every stage

In a year that has demanded evaluation and the redesign of our current approach to everything from health care to racial justice, what is clear is the U.S. is in a period of profound uncertainty and change. This state of unpredictability has led many in the country to feel like election-related violence is inevitable. Though incidents of electoral violence may appear to erupt suddenly, Caleb Gichuhi, a Kenyan peacebuilder, says the potential for electoral violence actually exists pre-election, on Election Day and post-election.

On Election Day, the main risk is that groups use violence to deter and intimidate voters at polling stations.

During the pre-election stage, various violent groups might seek to ensure low voter turnout. This is where key community members are vital in encouraging and motivating their supporters to vote. Celebrities and public figures have been especially active on social media urging their followers to vote, though those same platforms are rife with misinformation .

On Election Day, the main risk is that groups use violence to deter and intimidate voters at polling stations. Often, this behavior occurs after the widespread propagation of narratives of electoral fraud, disinformation, and electoral interference by foreign powers. These narratives are used by violent actors to frame their actions at polling stations as attempts to “protect the vote."

The third stage for potential violence is post-election, when votes are counted and results are announced. Mail-in ballots are expected to continue to arrive after November 4th. No matter whether ballots received after Election Day are counted, there will almost certainly be a delay between Election Day and the announcement of the winner.

One of the most important factors in successfully preventing and mitigating electoral violence is engaging key community members.

Should violence occur, the veracity of any reporting might be called into question, as actors may try to capitalize on tensions to create chaos. The American public is currently polarized, so it’s important that messages and alerts of violence come from a diversity of trusted sources to reach the widest audience and keep people informed.

One of the most important factors in successfully preventing and mitigating electoral violence, according to Burundian peacebuilder Yves Iratoze, is engaging key community members such as local/ religious leaders, civil society members, and prominent individuals to influence those around them to remain peaceful. He believes that these key stakeholders “understand at a deeper level when there are tensions that could lead to violence” and could help diffuse potential incidents before they occur. In the event of violence, religious and community leaders can act as trusted sources of information, able to announce any incidents of violence, as well as potentially quell violence in contexts where law enforcement risks escalating conflict.

For everyday Americans wondering what they can do, Gichuhi says no unifying action is too small, whether online or offline. We can all take part in de-escalating tensions through reporting hate speech and disinformation on social media, fundraising for peacebuilders at the polls, or volunteering directly with peacebuilding organizations. He urges people to reach across ideological divides and remember that pride and respect for our nation’s democracy and freedom are values that we all share.

Highlight stories of cooperation, unity, and resilience in your community to reinforce that norms of inclusion and collective agency are valued in this country.

Highlight stories of cooperation, unity, and resilience in your community to reinforce that norms of inclusion and collective agency are valued in this country. Help foster a sense of togetherness despite differing political allegiances and opinions by returning to the things we have in common.

Be kind. According to Gichuhi, it is up to everyday Americans to model the positive norms we want to see.

This is a period of transformation in the U.S. and, as with all growth, it is uncomfortable. Jayaweera invites us to “dive in [our] pain, swim in [our] cries, experience [our] inner struggle” to reach a place where you know that “in order to contribute to transformation, only you know what is best for your community.” In that place of pain, “anger will become the source of energy to think and act out of the box, guilt becomes responsibility and fears become a source of compassion.”

Above all, the peacebuilders urge Americans to trust in themselves, in their communities and in their country.