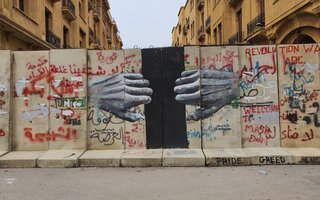 I guess most people in Lebanon, and anywhere affected by violence and injustice around the world, would utter the same response. It has been a heavy year - one full of grief, anger, pain, fear, trauma and all forms of insecurities.

When foreign colleagues ask me how I am doing, I never know what to say. "I am physically okay", I repeat like a parrot

I don't talk much about the sense of guilt I have for miraculously surviving the deadly Beirut blast of August 4th 2020. I am grateful that I came away without a scratch, however I am well aware of my emotional scars. The feeling of guilt has now turned into fear: I startle with every door slam or unexpected noise, and freeze with shock at anything that reminds me of that dreadful day, like the suspicious fire at Beirut's international airport in June.

I know I am not alone in having these post-traumatic symptoms, especially since my generation spent our childhood living through a civil war. I am angry with the insensitivity of many, too. Planning a pool party named "blast" not far from where the explosion occurred is by no means a sign of resilience. Nor is calling a burger "August 4". It is heartless to have models in photoshoots next to the rubble, and singers filming video clips in devastated areas. These acts are a scary indicator of our status as a fragmented society when it comes to mental health and national compassion. It is inhumane to seek personal emotional salvation by neglecting the pain of others.

It is equally outrageous to ignore citizens' suffering, and all the more so when this is done by elected politicians. When communities were still focused on rebuilding after the blast, amid deteriorating economic conditions and a stifling political crisis, a former Hezbollah Member of Parliament held a lavish wedding for his daughter. Worse yet, a former minister wanted for questioning about the blast refused to take part in the investigation. He too organized a high budget wedding celebration for his daughter. They have no sense of social responsibility, empathy or remorse.

The burdens of daily life

My heart aches daily reading tragic news headlines such as the fatal explosion of a fuel tanker in Akkar in Northern Lebanon. Many people lost their lives at gasoline stations: an elderly man was found dead in his vehicle after waiting in a long queue in the burning sun. A mother and her four daughters passed away in a fatal car crash when trying to get some fuel to pick up her husband from the airport.

While cancer patients worldwide focus on their health and spirits, those in Lebanon struggle to even get much-needed medicine. They protested on the streets to defend their right to uninterrupted treatment because the healthcare system in the country is falling apart. Worse yet, stocks of expired cancer medicines were found in warehouses in Beirut. How many lives could have been saved!? Some doctors went on general strike to object to the lack of medical supplies as a result of the financial crisis; the world's worst since the nineteenth century. One of them said on television that the Lebanese people are enduring a massive, slow slaughter orchestrated by the authorities. The Beirut blast, on the other hand, was a quick one. What a cruel and bitter comparison!

I will write now about peacebuilding, but to many the concept seems alien when people, sometimes armed, fight over bread, milk, medicine and other basic supplies.

Those that are cynical in Lebanon assume that peacebuilders are affiliated with Western embassies and earn what is known as ‘fresh dollars’– foreign currency transferred from abroad represents a lot of money, given the significant depreciation of the Lebanese Lira.

To them, it is easier to blame peacebuilders than to revolt against corrupt politicians and push for their accountability. However, peacebuilders are generally either underpaid or volunteers, lacking legal and financial rights as well as self-care support. They don't live in a bubble; they roam around looking for medicine and waste hours in queues to get bread and fuel. In fact, I conducted my interview with Shirine Jurdi while she was waiting to fill her car with fuel. This is a new time management skill in Lebanon. Jurdi, a peace activist specialized in gender and human security, is planning her meetings between daily gas queues.

She told me that the fuel hunt was the most dangerous of all, and admitted she had constant concerns about this "major human insecurity". She said the process consumed a lot of her energy and she was losing concentration and suffering from short-term amnesia. She laughed when I told her I had the same condition and suggested we form a "community of forgetting". She added, in a serious tone, that perhaps it was a subconscious collective practice to have some mental relief.

Despite the fact that she was detaching herself from the news, she told me that she still has the daily urge to cry. Jurdi focuses on work which she describes as "a window of opportunity for mental wellbeing as it is a tool for change and enhances some success stories. If we don't remind frustrated people of non-violence and peaceful communication, no one will", she thought out loud. Jurdi believes peacebuilding is more than ever tied to development, which shares the objectives of human security, and political participation, given that municipal and general elections are scheduled next year and civil society counts on them to push for reforms and increase accountability. They are preventive tools to dismantle violence and would lead to state-building in Lebanon. In her holistic view, peacebuilding is a grassroots, horizontal practice which must intersect with state-building as a vertical pillar, rooted in participation, social cohesion and justice.

Asked to comment on the growing exodus of young and middle-aged professionals experienced in fields related to peacebuilding and human security, she said: "I work for peace, security and participation. I should set an example. If I were to turn my back and go away, I would let my cause down". However, she too would leave Lebanon if the health and security situation were to break down entirely and if the spread of small arms posed additional risks. In her words, "I don't want to die because healthcare is fading or as result of a stray bullet at a gasoline station. You must stay alive for your activism. I am staying as long as I can endure and still act". I think that applies to me too, although I admit my safety net is shrinking with every friend migrating from Lebanon.

Asked to comment on the growing exodus of young and middle-aged professionals experienced in professional fields related to peacebuilding and human security, she said: "I work for peace, security and participation. I should set an example

Jurdi spent more than an hour and a half without being able to fill her car’s tank. When she nervously told me angry people were fighting, our conversation immediately shifted from theories related to the Responsibility to Protect and whether it applies to Lebanon from a peacebuilding lens, to constant fears of armed violence. Jurdi had to go to another station and again waited in vain. There too people were enraged; but luckily it didn't end with violence. A day earlier, three people had been severely injured. Sadly, violence is on the rise in Lebanon, be it verbal, physical and armed.

Some would argue that suicide is a form of violence. I think it is a reflection of pain and despair. It is heartbreaking that young people who were on the frontlines of the October 17th Revolution have died by suicide. They had high hopes and the country failed them.

Therefore, in the Lebanese context, and perhaps in every society experiencing conflict, I think mental wellbeing should play a bigger and more important role. For on-the-ground political activism, mental health is a preventive and self-protective tool for peacebuilders. I ask Jurdi to share her thoughts on this. She said that peacebuilders rely on communication channels for transformation and to acquire new skills, and they are generally able to cope well with pressure. She added that maintaining hope is fundamental to achieve peacebuilding, which she described as a multi-phase process that intersects with people’s wellbeing, mainly mental and emotional. However, she also admitted that this kind of work can be draining, especially when dealing with refugees and survivors of violence and rape. Thus, peacebuilders should be well equipped in the field of psychological care, for their own sake and their family members as well. They must use it as one tool in a holistic approach to carrying out their work effectively.

maintaining hope is fundamental to achieve peacebuilding, which she described as a multi-phase process that intersects with people’s wellbeing, mainly mental and emotional

But how? In fellowships and conferences I attended abroad on peacebuilding and Women, Peace and Security, self-care sessions were either ill-placed in the busy schedule or lacking in content. I can never forget a session late in the afternoon on handling trauma in December 2018. The trainer lacked sensitivity. She had theoretical knowledge but had clearly never experienced the trauma of war. Shortly after, I burst into tears and an activist from Kurdistan vomited. None of our hosts acted. We, the participants, ended up comforting each other with songs, silly jokes and some food. I learned the hard way that mental wellbeing is more about compassion and support rather than theories on how the brain deals with memories and emotions. It goes well beyond breathing techniques.

Jurdi believes that we, Lebanese peacebuilders, should have "national ownership" of the field of wellbeing. In my view, peacebuilding is not a rigid concept; it keeps evolving with bigger sensitivity to local contexts. I never realized how tied it is to mental and emotional wellbeing before the Beirut explosion. It is getting harder and harder to survive the daily struggles in Lebanon which undermine our basic rights to human security. Adding COVID-19 into the mix and its impact on our daily lives, and the need for psychological strength and self-understanding becomes clear.

This is my new challenge: inventing my own formula to avoid burnout as I teeter on the edge of trauma. My current mission is building peace within me to overcome that haunting sense of guilt caused by the blast. On the national level, accountability remains the key to peace and state-building in Lebanon; and to that mission I will always be committed.