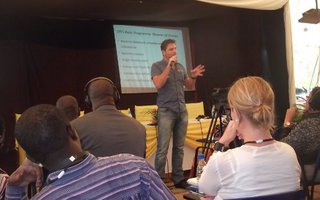 At the end of November 2012, I attended a three-day conference ‘Peacebuilding in Africa: Bridging Theory and Practice’ gathering practitioners and academics from diverse countries of the Great Lakes Region and the Horn of Africa. It provided a platform of learning, exchange and understanding on how to reduce the gap between theory and practice in peacebuilding practices.

In most African contexts, identity has been used negatively to manipulate, stigmatise or divide, occasionally causing extremely violent conflicts. In the case of Kenya for example, identity has been utilised as a central peacebuilding tool to bring about positive change. As people identify themselves at a personal, relational, structural and cultural levels, practitioners and academics in peacebuilding field need to carefully consider this important element in their peacebuilding efforts. Failure to understand the value and importance of identity perception may lead to false and superficial reconciliation.

The Democratic Republic of Congo (DR Congo) is a case in point, where the main explanations for conflict, namely natural resources, sexual and gender-based violence, and the lack of good governance, are too simplistic and yet dominate the narrative given by external actors. Whilst it is true that these explanations help bring the conflict into the international spotlight, there is also a risk that they overlook other root causes of the conflict. In the case of DR Congo, this has resulted in prolonged peacebuilding missions and interventions from both the UN and International Non-governmental Organisations (INGOs), with limited achievements on the ground and a continuation of the conflict in the east of the country.

After carrying out research into peacebuilding intervention, Séverine Autesserre from Columbia University reported her findings:

By valuing external expertise at the expense of local knowledge, [it] can prevent peacebuilding efforts achieving the desired results. Cultural and societal misunderstandings between the local and expatriate communities can distort the image and mutual perceptions of the other. Further, the working methods and often strict security standards of international organisations can contribute to deepening this gap in understanding.

Expatriates are frequently offered leadership posts, whilst locals are offered less commanding and influential posts, and rarely have any input on peace interventions. According to Séverine Autesserre, knowing the local language, region and culture should be as important as technical expertise and international experience, in order to engage more effectively within the peacebuilding context.

I decided to share with the audience the case studies that Peace Direct documented through “Ripples into Waves” and my memorable experience of meeting the mixed active group of women peacebuilders of Ruyigi that have revealed and confirmed the central role of local actors.  Lively and interactive exchanges around the theme of utilising local resources helped participants understand that local actors are as important as expatriates, and that local ownership, exchange of knowledge and expertise between international peacebuilders and the local community, and a long-term commitment to influencing the effectiveness of peacebuilding, are all vital for a more peaceful culture to thrive.