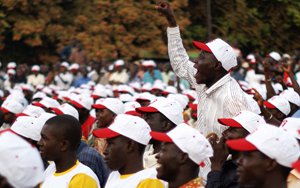 Burkinabés at a live public radio recording. Burkina Faso’s cultural scene has contributed to a wide range of civil society organisations coming to the fore since Blaise Compaoré was removed from power. Image credit: Guillaume Colin et Pauline Penot.
The Compaoré era was a tropical dictatorship, siphoning off Burkina Faso’s wealth
Burkina Faso wants to turn the page on the reign of President Blaise Campaoré. The legacy of long-term regimes is long-term crisis, and Burkina Faso is no exception. Its political history before the 1990s was a succession of coups d’état, and for 24 years from the last coup in 1990, Compaoré maintained his grip on power through unpleasant political and judicial strategies.

In order to do this, soon after taking office he started developing a culture of fear. Politically, he sought to systematically eliminate those who were likely to launch a coup against him. Some of his former ‘comrades’ were forced into exile, and the opposition was weakened using corruption and defamation.

Compaoré also made a series of changes to Article 37 of the Constitution, which deals with limitations on the presidential mandate, and he always managed to find a legal justification for staying in power. The last attempt at this was his insistence on trying to seek constitutional change to allow him to stay in power for a fifth term. This is what precipitated his departure from power in October 2014.

The Compaoré era was therefore without foresight or ambition, nothing more than a tropical dictatorship siphoning off of Burkina Faso’s wealth. Civil society played a major role in getting rid of this system, contributing to reinforcing opposition parties through a tacit alliance in a fight against a common enemy. During the demonstrations that led to Campaoré’s resignation, there was a strong bond between the two, even though the diversity of civil society made it difficult to form a real coalition.

The post-Compaoré transition to democracy has also been led from the ground up, and the involvement of civil society in defining the rules of the future regime has been significant. For example, it has had a strong formal presence within the Conseil National de la Transition (National Transition Council) and the Commission de la reconciliation nationale et des reformes (National Reconciliation and Reform Council).

During the transition period, civil society had played two main roles: to lay the foundations of the future regime and prepare for elections. Its determination to bring about real change led it to manage certain issues in a radical way. For example, the dissolution of the notorious Regiment de la Securité Presidentielle (Presidential Security Guard) was requested and achieved.

More broadly, the resignation of President Blaise Compaoré launched an exceptional period of openness in political life. Civil society has often had to face up to the regime’s corruption and intimidation. But after the murder of journalist Norbert Zongo in 1998, groups came together to show a united front in challenging authoritarian power. And this dynamism has been useful during the transition, in activities such as election observation and civic education. Civil society has been praised both for its contribution to the advent of the transition and its positive influence during it.

The resignation of Compaoré led to exceptional openness in political life
However, there have been damaging setbacks. Political and civil society actors all wanted to take charge of the transition period and everyone wants to impose their vision of post-transition Burkina Faso on the country. Civil society has seemed at times to compete with the political parties, positioning itself as the defender of republican values. By presenting itself as the guardian of the institutions and achievements of the uprising, it gave the impression of wanting to manage the transition itself, rather than remaining solely a check on power.

Furthermore, during the transition, the number of civil society organisations has increased, some with far-fetched names that are a reminder of their circumstantial and opportunistic nature. This has widened the split within civil society, and risked its hard-earned credibility.

The situation has given rise to the hypothesis of an ‘impure civil society’ divided into a sections of civil society ‘in power,’ ‘of the opposition,’ and ‘of the non-affiliated.’ Politicisation and corruption are continuing risks.

Of course, this doesn’t apply to everyone; the oldest organisations proved their integrity and professionalism during the Compaoré era. But although civil society has certainly influenced the direction and content of the transition for the better, it has at times also demonstrated too much zeal. This could be said to have tarnished its reputation and diminished its impact. It must regain its dignity, and it is now urgent to organise beyond advocacy work and training in order to have a truly independent civil society. Nationwide discussions should take place to restore confidence in this key transitional actor.