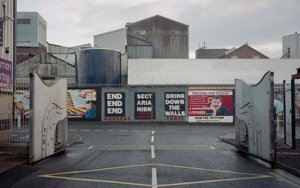 Image credit: David Ramos
While the peace is being managed by and large, it is also clear that it has not yet been won.
It has been over 17 years since the signing of the Good Friday Agreement in Northern Ireland which brought to an end three decades of violence in which over 3,500 people were killed and tens of thousands more injured. The end of the so-called Troubles has brought relative stability to Northern Ireland, with the peace process often held up as a shining example of successful conflict resolution to other divided societies marred by conflict.

Once bitter enemies, Republican and Unionist politicians have since 2007 sat together in a power-sharing executive in Stormont in charge of the day-to-day running of Northern Ireland. The Royal Ulster Constabulary, once derided by Catholics as largely sectarian, has been transformed into the Police Service of Northern Ireland (PSNI) and established credibility among large sections of both Protestant and Catholic communities. Even the contentious issue of parades – important expressions of identity for sections of both communities – is being dealt with even-handedly through the establishment of an independent Parades Commission.

But whereas the peace is being managed by and large, and the achievements made should not be lightly dismissed, it is also clear that it has not yet been won.

Paramilitary groupings, albeit on a lesser scale compared to the past, continue to instil fear among communities and engage in gangland-style violence, with punishment attacks and even murder occurring openly on the streets. Around 3,000 police officers were deployed to quell rioting after the July 12 Orange Order parades this year; dozens of officers have been injured in recent years at these events. On a political level, furthermore, the Stormont Assembly has experienced its worst crisis for years with a critical breakdown of trust between Sinn Fein and Unionist parties. This came after the PSNI and a subsequent investigation, in response to the murders of two high-profile Republicans, admitted that the Provisional IRA (as well as other paramilitary groups) continues to exist in some form.

While none of this indicative of a return to the past – indeed, the overwhelming majority of Northern Ireland’s population support the peace process – it nonetheless shows, as Northern Ireland writer and journalist Susan McKay has observed, that the peace has not yet planted deep roots. One of the reasons for this is that being Catholic or Protestant, or Republican versus Unionist, still matters a huge deal in twenty-first century Northern Ireland, narrowly determining many people’s identity, religion, education, friendships, and political affiliation.

In a 2013 report by the Belfast-based Institute for Conflict Research, it was found that the peace agreement and subsequent binary political configuration of power-sharing have in fact “further entrenched perceived cultural differences” and that “the current set up allows little room for the evolution, maturation or development of alternative political and religious identities.” Unsurprisingly perhaps, people in Northern Ireland are still overwhelmingly likely to vote for a political party based on narrow ethno-national identification.

Indeed, no-one should have expected that the deep-rooted scars of inter-communal conflict and division stretching back many decades, indeed centuries, could so easily be healed. An urban geography of close-knit housing estates separated by so-called peace walls – more than a hundred of them – continues to divide Catholics and Protestants in parts of Belfast and Derry. It is calculated furthermore that the vast majority of housing estates exhibit significant residential segregation with more than 80 percent of one community on one estate. The same is true of education with around 90 percent of schoolchildren attending schools that are predominantly Catholic or Protestant. This continued prevalence of segregation is a breeding ground from which sectarianism – ethnic, religious, and political – feeds.

Thus, just as grassroots initiatives or the Peace and Conflict Resolution Organization sector were important in buttressing the peace deal and creating a “peace constituency” in the 1990s, they still has an important role to play in post-conflict Northern Ireland.

Accordingly, community grassroots initiatives are needed that bridge polarized identities and foster a sense of shared rather than divided space. This is particularly important for the next generation of Northern Ireland’s youths so that they do not grow up in a divided society like their parents and grandparents. Thus addressing and promoting issues of common social concern that penetrate barriers of segregation have an important role to play.

The measures to be taken are many: these range from creating shared confessional schools, removing barriers between communities and creating shared interfaces of positive interaction, to tackling sectarian propaganda, forming inclusive youth and sports groups, as well as providing mediation and conflict resolution services. Some are easier to achieve than others; others such as removing the peace walls are longer-term tasks. In fact, grassroots community initiatives are already well-developed with a proliferation of intra- and inter-community activities. Women’s groups campaigning on issues such as violence, social justice, and representation have been particularly notable.

However, such initiatives have also faced key constraints. These include a lack of funding, training, and resources, with recent budget cuts having severely affected community and voluntary groups. The notion of “selling out the community” still has particular resonance which can serve to hinder initiatives, especially where former or active paramilitary figures have taken prominent positions in the community. Whereas former “combatants” can also be a force for good, the legacy of paramilitarism and ruling communities by fear remains a blight in some areas. Crucially, moreover, there has been a lack of integration and coordination between politics in Stormont and activities on the ground. Indeed, for grassroots efforts to be successful, there needs to be greater political will and support, with parties needing to reach beyond and find appeal beyond their narrow electoral base. Sadly, this has been lacking among many of today’s generation of myopic politicians – hard-boiled from decades of conflict – who have taken a zero-sum approach to identity politics.

Encouragingly though, albeit small and dwarfed by the traditional parties, there has been an emergence of other parties such as the Alliance Party and Green Party – which indicates a trend towards different non-sectarian political identifications and the building of cross-community platforms. What is more, in the recent paralysis of power-sharing and breakdown of trust between the mainstream parties, support for these parties is growing as people seek to find alternative political expressions arguing for change rather than a cementing of the status quo. 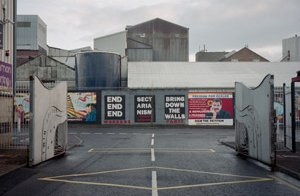