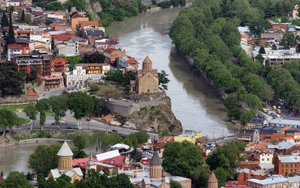 Tbilisi. Women’s organisations in the Georgian capital and across the South Caucasus are playing an important role in supporting those affected by conflict. Image credit: Alexxx Malev.
In the 1990s, women demonstrated that war and peace was not an exclusively male domain
When wars broke out over the breakaway territories of Abkhazia, South Ossetia and Nagorno-Karabakh in the 1990s, women were often at the forefront of civil society peacemaking efforts. From organising protests such as the Women's Peace Train in Georgia, to negotiating prisoner-of-war exchanges on the Armenia-Azerbaijan border, they demonstrated that the politics of war and peace was not an exclusively masculine domain.

However, a quarter of a century later, women play a limited role in politics in the South Caucasus. They are largely absent from official conflict resolution processes, and their grassroots peace initiatives lack visibility. While women's organisations continue to connect across borders in the entire South Caucasus – often using Georgia as a meeting place – more formal structures are needed to support these networks and develop women's regional agenda on peace and security.

After the collapse of the Soviet Union, western donors encouraged the professionalisation of women's NGOs, creating networks of women across the South Caucasus. Initially most visible in the fields of human rights and humanitarianism, women's organisations came to focus specifically on women's rights violations, in the home, the workplace, and public life. Among other things, women's organisations have uncovered alarmingly high rates of domestic violence.

For instance, some surveys in Armenia show that approximately one third of women experience physical violence at home, while two thirds experience psychological violence. Other forms of discrimination include sex-selective abortion – sometimes forced – which has led to thousands of "missing" women and girls across the region. Women's organisations provide psychological and legal support for women and families, raise awareness on gender issues, and advocate for policy change.

Sadly, it is only when violence against women moves onto the streets that it commands widespread attention. In October 2014, Maka Tsivtsivadze, a 28-year-old lecturer at Tbilisi's Ilia State University, was shot dead outside a lecture hall by her ex-husband. An Azerbaijani schoolgirl, Aytac Babayeva, was similarly murdered in brutal, public fashion in Baku in April 2015. The 17-year-old was stabbed to death in what local media called a ‘crime of passion’.

Despite these and other cases, those who consistently advocate for stronger measures to tackle gender inequality are often portrayed as ’traitors to the nation’ and accused of destroying traditional families. Anti-feminist campaigns are used as a political tactic, as demonstrated in Armenia in 2013, when nationalist groups forced a change in the wording of a proposed law on gender equality and put several women's organisations at risk.

Women's NGOs encourage women to become active members and even leaders of their communities. Networks of active women from across the South Caucasus serve a dual purpose, pooling women's rights expertise and serving as a platform for peacebuilding and dialogue. Within the framework of women's rights, many links have been fostered between women from both recognised and de facto states.

In recent years, there has been a growing emphasis on the United Nations Security Council Resolutions on Women, Peace and Security, which are seen as a means of building bridges between grassroots peace activists and formal peace processes. Georgian women's organisations, supported by UN Women, successfully lobbied for a National Action Plan for 2012-2015.

However, lawmakers in Armenia and Azerbaijan have been dragging their heels. Women's organisations in both countries have created working groups to monitor the situation, but time and again they are told that women's rights are not a priority. In the breakaway regions, women are also starting to draw attention to the Resolutions, which they say local authorities are obliged to implement.

There is no guarantee that governments, even those taking steps to recognise the Women, Peace and Security agenda, will be supportive of women's grassroots peace initiatives. In recent months, there has been a marked down-turn in civil society engagement across conflict lines, the political risks of peacebuilding have increased, and many women's organisations have experienced a shortfall in funding. As conflicts become more entrenched, it is important that women's organisations are not forced to turn inwards and abandon their vision of peace and security across the region.

Until now, regional networks have provided a safe space for women to share their experiences in gender and peacebuilding. The Women, Peace and Security framework provides a common language for articulating shared goals and strategies, at the local, national and regional levels. The international community could do much to support this agenda, raising the profile of women in peacebuilding and conflict prevention, including them in negotiations and generating more buy-in from local politicians. This could not only revive stagnant peace processes, but ultimately lead to region-wide transformation.

Sinéad Walsh is a Government of Ireland Postgraduate Research Scholar at Trinity College, Dublin (2012-2015). Her PhD focuses on women's organisations, civil society peacebuilding and the Women, Peace and Security agenda in Armenia and Azerbaijan. She has carried out extensive fieldwork in the South Caucasus
Read more from Sinéad Walsh 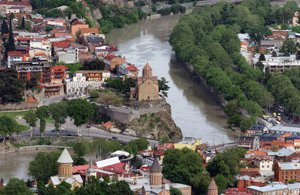