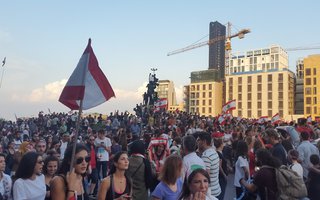 All photos by Sawssan Abou-Zahr

Since Lebanon's independence in 1943, women have been struggling to shatter the glass ceiling denying them equal rights. This is an unprecedented moment to kick it. I used the term "kick" to salute Malak, who kicked a minister's bodyguard to prevent him from shooting civilians on the first moments of the uprising. A week later, she got married among fellow rebels. Four months later, she was summoned to the military court. Her act of self defense was punished; the attacker was never questioned.

Malak's story sadly summarizes the path of the uprising, from unprecedented popular strength and unity, to revolutionary fatigue resulting from growing oppression and severe financial restrictions, and the unexpected outbreak of the Corona pandemic. Despite the successive, unfortunate setbacks, the uprising remains to many, including myself, the last chance to establish an inclusive secular state. An impossible dream? It is worth it, and this article salutes the female dreamers.

Like Malak, an equally brave woman was pictured defending herself from a brutal attack by thugs supporting Hezbullah. She could have been any of us. I was among demonstrators when Hezbullah loyalists threw stones and empty bottles on us. That anonymous woman remains a symbol of female leadership in the revolution.

The females on the frontlines

Lara held her husband Alaa bleeding to death after a member of Army Intelligence shot him. She vowed to continue his struggle till her last breath. Amid the lockdown and crackdown on the iconic tents put up by protesters, the military court released the killer.

When excessive power was used and rubber bullets left several young men without an eye, Sanaa climbed cement barriers and barbed wire. This courageous woman wanted to access the Parliament's surroundings turned into a military barracks.

Women went to sit-ins with their children. One was pictured clinging to her son to prevent officials from arresting him. Another stood between her son and riot police. An outspoken elderly woman in a veil reached out to soldiers blocking the entrances of downtown Beirut telling them the severe economic crisis affects them too; and that they shouldn't protect greedy politicians. A soldier was touched by her courage and kissed her on the forehead. She must have reminded him of his mother. 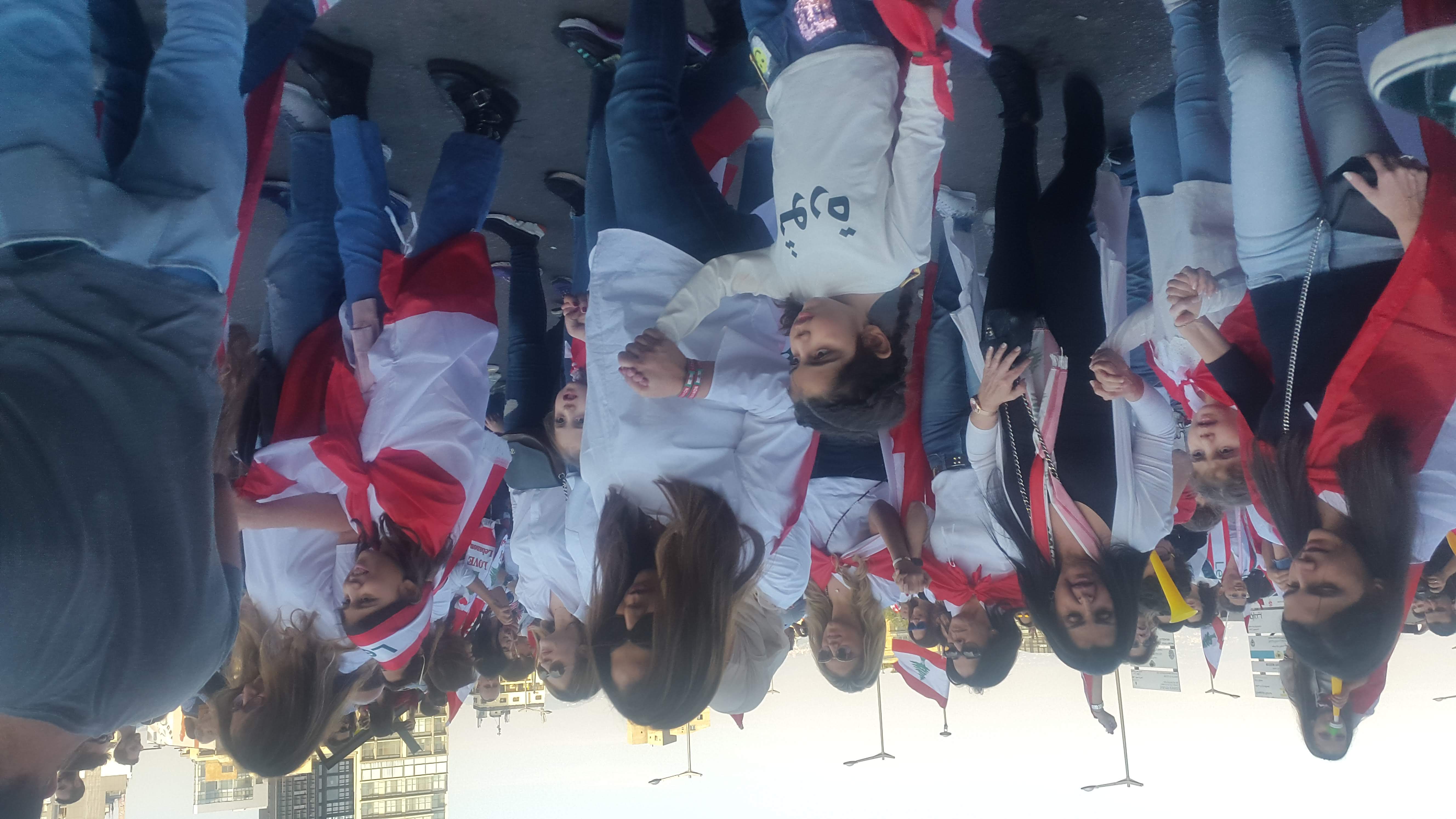 The rebellious roles were in harmony with the traditional ones socially attributed to females. Those who couldn't be on the streets volunteered to bring home made food to demonstrators, especially those sleeping in the squares. Others cooked there each day. Young protestors said elder women invited them, with motherly affection, to nap and shower in their homes.

When thugs loyal to Hezbullah attacked peaceful demonstrators on the 9th day of the uprising, an old man told me and other female demonstrators: "God bless you daughters. You are really brave, and this revolution won't survive without you".

We women were on the streets seeking economic and political demands, but also fundamental reforms to the patriarchal system undermining our rights. We shall continue our own revolution.

To start with, the national anthem that dates back to 1927 is not gender friendly. It states that "Our field and mountain produce men". When I memorized it as child, I asked why women were excluded. No one had an answer, not my late mother or teachers. Years later, as I practiced journalism with a feminist and human rights approach, I knew that achieving parity with men means amending this verse. During the revolution, female singers chanted the anthem adding "women" to "men". These were emotional moments of pride and patriotism. We repeated it on International Women's Day march.

Discrimination is equally stated in the constitution. In the nationality law inherited from 1925, a father can pass nationality to his children, whereas a mother is denied that if her husband is a foreigner.

A Lebanese woman gives life but not citizenship!

Politicians continue to block calls to lift all the reservations on the United Nations Convention on the Elimination of All Forms of Discrimination Against Women (CEDAW), mainly articles 2 and 9, in an outrageous violation of women's nationality rights.

It wasn't until September 12th, 2019, one month and five days before the revolution, that the outgoing government adopted a first national action plan for the landmark UN resolution 1325. Although it was a much anticipated step, it failed to address the issues mentioned above. Moreover, the long Corona lockdown and the loss of thousands of jobs made battered wives subject to additional abuse.

Ironically Lebanon is considered a pioneer in the Middle East in women's freedoms. I have always explained to my foreigner friends and colleagues that this was an illusion. It is true that many Lebanese women can dress and live as they please, but that's about it. And then comes the thick glass ceiling of religious and political boundaries.

A radical Shiite Sheikh criticized the leading role of women, their "clothes" and "conduct" in the "so called Lebanese protests". Religious courts share a history of humiliating divorced women and denying them custody of minor children. Several mothers have been imprisoned for refusing to give up on their sons and daughters. A former prominent Member of Parliament couldn't protect his own daughter and grandchildren from the threats of her ex husband.

It is true that many Lebanese women can dress and live as they please, but that's about it. And then comes the thick glass ceiling of religious and political boundaries. 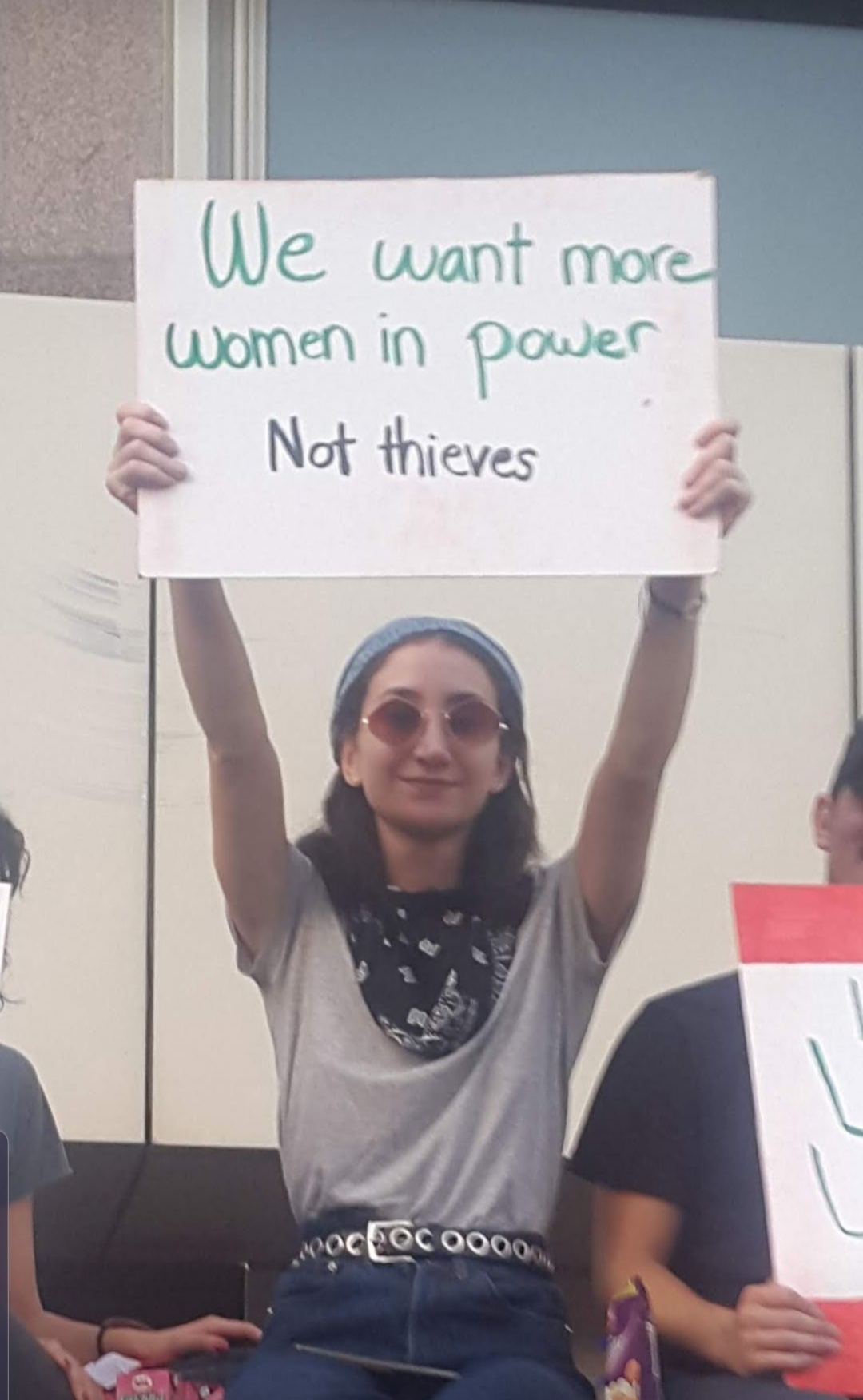 A glimpse of hope: Badia’s story

At the early days of the uprising, I commented on a Facebook post by fellow journalist Badia Fahs, that if the revolution's only success was to reunite her with her son, it would be enough.

Badia is confident women will not stop the fight for their much awaited rights. She thinks the revolution that she compares to a pure stream, gave them faith in themselves. She says that the politicians are the embodiment of patriarchy; and the women who dared to curse them in public, are breaking outdated social taboos. It is unprecedented, especially in the Shiite strongholds.

Badia takes a deep breath while telling me that the injustice she long endured was a result of the sexist ruling of the religious court and the cruel social indifference. She says that the society is harsher on women than clerics.

The revolution was a turning point. She took part in it daily. Badia held a small handwritten banner expressing her wish to see her boy. Young men and women reached out to her. They hugged her, promising to find 14 year old Iyyad.

She says they provided her with an emotional and psychological shield. That wasn't the case 11 years ago. She lives just across the street from her ex-husband, and yet she is denied the right to meet her son. He was taken away from her at the age of three. He was brainwashed and told she was crazy wanting to torture and kill him. She visited him at school, and he always quivered of fear; the poor child would ask her to leave. The principle said he was terrified and therefore she wouldn't be allowed to see her son without his presence and that of his stepmother. That was humiliating for Badia and unhealthy for the boy so she refused.

Afterwards, she used to sneak on him, hiding behind trees. She watched him grow without being able to hold him. The uprising made everything possible. They were both at the revolution's square and the young rebels managed to bring him to her. It was the first time she saw him that close, he was simply beautiful. She asked him with a trembling voice: "Do you know who I am". He answered: "Yes". That was an unexpected pleasant surprise. Iyyad must have thought about her after all. She feared he had forgotten her. He obviously hadn't.

At that moment, she was full of hope. "Would you allow me to kiss you?". He answered: "Not now". They were both trembling and crying. Badia is tearful as she recalls that moment, that lightning of emotions. She describes it as love at first sight. She adds as if talking to herself not to me: "He saw his mother after long years… He must have fallen in love with me. Love came back to his heart. He will remember that moment as long as he shall live".

Unfortunately, the reunion was brutally interrupted. Iyyad's cousin took him away. As much as Badia wanted to grab him, she was wise enough not to make a fuss. She recalled those uneasy encounters at the school and didn't want to remind him of them.

"It was a moment worth of a lifetime, a turning point", she says with sparking eyes. I comment: "Just like the revolution". Badia approves: "If it weren't for the uprising, we wouldn't have met face to face. The revolutionary energy empowered me and I defied my own fears".

That priceless moment is one of the revolution's stories of hope. Badia speaks about a future with her son as if describing the current state of the uprising. "We should be patient, wait and plan. We will never fall into despair again", she says. Badia is sure that "the revolution is our salvation. It will not die. Even if it fades, we women shall continue it by ourselves". Oh yes, we sure will. I am proud of you my friend; you are one of the revolution's heroes.

Badia is sure that "the revolution is our salvation. It will not die. Even if it fades, we women shall continue it by ourselves".