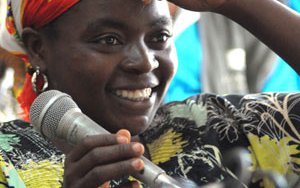 This week we launch our annual competition for Tomorrow’s Peacebuilders, which recognises the very best emerging local peace organisations around the world. Prize winners will receive $4,000 and an invitation to the prize-winners’ event in London in November.

Last year’s competition received 244 entries from 54 countries, demonstrating the need for such a competition. One of the four winners, KI from the Philippines, said:

Being a winner of the Tomorrow's Peacebuilders competition not only recognises the efforts and achievements of our volunteers, but has opened new doors to link and exchange ideas with other peacebuilders around the world.

The core of Peace Direct’s mission is finding remarkable peacebuilders and supporting them to increase the impact of what they do. We don’t offer support to just any enthusiastic group of people aiming for peace - instead we want to find professional and effective organisations that have a track record of building peace, however new they are. These might be organisations where the founders have shown dedication to leave their normal careers and start a new movement for peace (such as the CPBR in Sri Lanka); groups of people able to work in the most dangerous or difficult of circumstances (such as the CRC in DRC); or activists with original ideas for dealing with conflicts (such as the Peace Courts of FOCHI in DRC).

We have found all these peacebuilders and more through searching around the world, through our contacts in the peacebuilding world, and through our online resource on local peacebuilding, Insight on Conflict, which lists over 800 groups working across the world.

We are aware that the nature of conflict and peacebuilding changes constantly and that the most exciting ideas can emerge anywhere in the world. So for that reason, last year we decided to launch the Tomorrow’s Peacebuilders competition.

Our experience of mapping peacebuilding groups around the world on Insight on Conflict had shown us that in every conflict around the world, there will be local people working for peace. And the number and spread of entries confirmed this. We whittled the large number of entries down to a shortlist of entries to be assessed by a jury of peacebuilding experts from around the world. The jury selected four winning entries, which you can read about here. Peace Direct was honoured to be able to make a contribution to the peacebuilding work of four remarkable organisations. We have also been able to form a longer-term partnership with one of the winning entries, Kapamagogopa Inc (KI) from the Philippines.

When we launched the competition last year, we did it as an experiment to see if we could use an open competition as an effective way of finding out about new peacebuilding groups around the world. The answer has been a resounding ‘yes’. We are therefore very pleased to be able to run the competition again this year. The competition launches today, May 23, and runs until July 21. You can find more information on this year’s competition here: /tomorrows-peacebuilders/