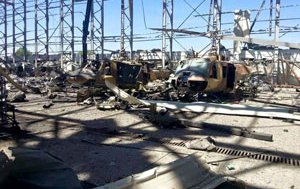 The above recording was taken on 26 March 2015 and was shared with Insight on Conflict to show the situation for residents of Sana'a.

The current fighting in Yemen is the legacy of decades of conflict. Repeated clashes between northern and southern Yemenis are only one symptom of the country’s complex problems. Suicide bombings have become common and political power frequently changes hands.

In the last few days, the road of peace talks and negotiations in the country has reached an important milestone. An attempted invasion of Aden and the southern half of the country has been launched by Houthi Shiite forces, loyal to former President Saleh. Full-scale military conflict appears to be close, and the Saudi Arabian army has launched air strikes to repel the rebels. Current President Hadi has been forced to flee - some say to Oman, some to Saudi Arabia - and it seems that Yemen’s seemingly endless journey of conflict is set to continue.

The Saudi airstrikes and the reaction from abroad

The Saudi coalition includes ten different countries, and has so far targeted the camps, congregations and houses of the Houthi forces, which are suspected of being backed by Iran. The aim is to stop their march towards Aden.

The British Foreign Office said yesterday that it supports the Saudi intervention, adding that the UN Security Council made it clear that Hadi is Yemen’s legitimate president. Its spokesman also said that the solution to the crisis must be a political one.

Al Dialami air base was destroyed in the recent airstrikes
In 2011, it seemed Yemen might be on the right track
On the other side of the Atlantic, the US also supported the Saudi action. The State Department also stressed the importance of the work of the UN's Special Envoy on Yemen, Jamal Benomar, who has urged calm and called for a negotiated solution to the conflict.

Meanwhile, Federica Mogherini, the EU’s foreign policy chief, issued a statement saying that “the latest events in Yemen have dramatically worsened the already fragile situation in the country and risk having serious regional consequences.”

She added that “the advance of Houthi forces and of military units loyal to ex-President Saleh towards Aden, as well as the aerial targeting of President Hadi's compound, were unacceptable steps. The ability of extremist and terrorist groups to take advantage of the situation is likely to increase dramatically." Mogherini also highlighted the effect upon ordinary Yemenis, saying that those “already affected by dire living conditions” would be the first victims of the escalation.

To go back to Yemen’s version of the 2011 Arab Spring, it would seem that Yemen had been - more or less - on the right track. The conclusion of a Gulf Cooperation Council Initiative as well as a National Dialogue Conference seemed positive, despite the attempts by many sides to derail social, economic and political development in the country.

And for some, President Hadi had seemed to be doing his best since he was elected in 2013, trying to lead the nation to safety and a better future - which ultimately has never come.

Many Yemenis are attempting to live some kind of normal life
Yet the expansion of the Houthi rebel groups has continued – capturing one city after another, from the Saadah Governorate to Amran governorate, before taking the capital, Sana’a, in September last year.

The UN and Benomar managed to help draft a Partnership and Peace Agreement in the wake of this. But, like all previous peace agreements, it was neither implemented or respected, and the Houthi forces continued to use force and arms. Heavy clashes saw President Hadi put under house arrest, as well as the Prime Minister and key officials.

President Hadi managed to escape his house arrest two weeks ago, after which more conflict followed. As expected by many analysts, the Houthi coalition advanced, capturing Taiz City in Yemen’s midlands, before attempting to seize Aden City.

Nevertheless, many common Yemenis in urban and rural areas are still resisting the violence, and attempting to live some kind of normal daily life, despite the huge problems because caused by the absence of state security, institutions and public services.

A state disintegrating and a people suffering

Yemen and Yemenis have for years faced many economic, developmental, social and political challenges, including radical Islamist groups, poverty, a lack of infrastructure - and a lack of any sort of government able to help tackle them.

And violence must be rejected. Yemen, with its tribalism and traditional structures, does not need arms, air strikes or interference – from whoever it may be. It does not need more blood spilt.

But it does need agreement from all key regional and international players. Peace and stability must be restored, with legitimate government institutions that have the powers and means to rule justly and fairly, for all Yemenis.

The current situation will lead to more conflict, more blood spilt and more radicalisation, with the absence of authority taking innocents on a road to nowhere. A ‘decisive’ military storm will be a recipe for nothing more than endless war.

[more_info_box]Background: Peace Direct will be creating a new section on Yemen in the next month, with updates and profiles of local peacebuilding efforts. For more information on recent events, click on the links below:

Disclaimer: The views expressed in this article are those of the author and do not represent the views or position of Peace Direct.