Nawaya works to provide economic opportunities is a tool of peacebuilding in Lebanon.
Last updated: January 2020

In 2009, a 14-year-old girl called Nadeen, living in a remote village in Lebanon, approached Nawaya's future founder, Zeina Saab, and showed her sketches of dresses she had drawn. Nadeen's designs really impressed her and made her realize that hidden talents and potentials exist among the most marginalized youth. They just need access to the right resources to thrive. Because of this serendipitous encounter, Nawaya (Intentions in Arabic) was established three years later, and Zeina gave up a successful career in New York and went back to find the talented child to enrol her in a fashion school in Beirut. 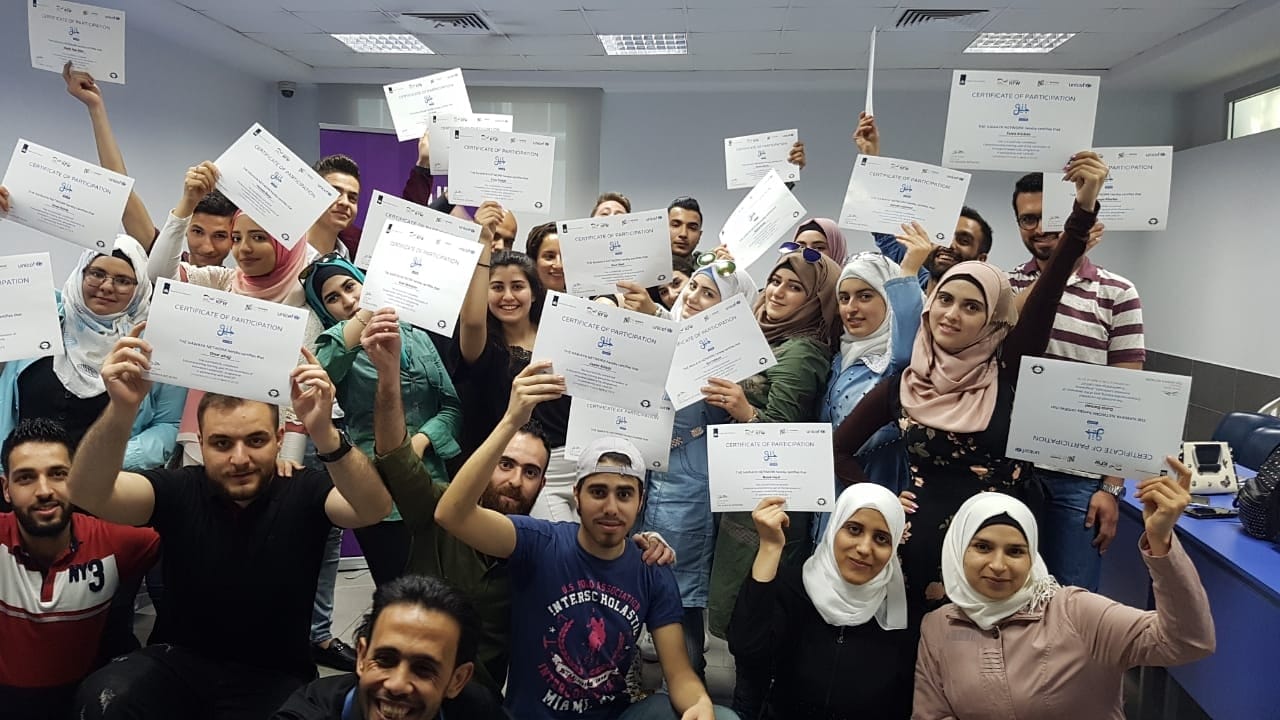 It was a turning point for both of them. Zeina Saab was born in Lebanon and raised in the United States, and she visited her home country every summer as a child. She wanted to use the skills she gained in America to improve the conditions in her birthplace, and to work on poverty alleviation, empowerment, conflict resolution and economic development, all pillars of peacebuilding. Nadeen graduated in 2016, thanks to the Talents Program of Nawaya, and is now a designer with a promising path ahead of her, mentoring young people with big dreams and little resources; while Nawaya continues to empower thousands of others like her, with much love and positive intentions or "nawaya" to build peace while fulfilling their dreams.

Nawaya aims to discover the hidden potential in disadvantaged youth, connect them to resources that would help them develop their skills, and ultimately empower them to shape their future positively instead of turning to unemployment and extremism; so they become in turn an inspiration of change for others and their mentors. It is a chain of hope, or a domino effect of empowerment and support, benefiting Lebanese as well as young Syrian and Palestinian refugees. 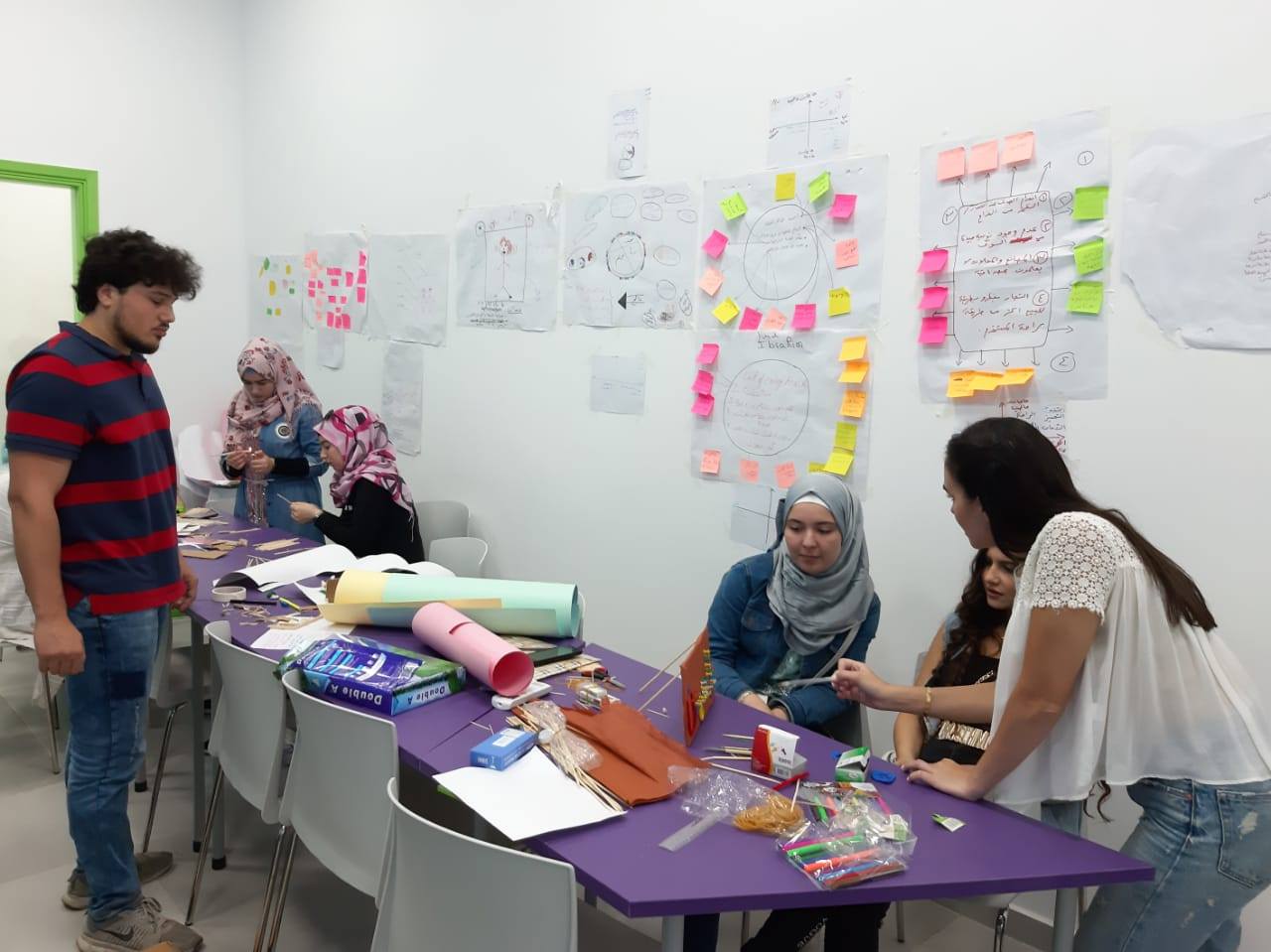 Refugees are denied formal access to the overcrowded job market in Lebanon, no matter how qualified or talented they are. Nawaya, believing equal economic opportunities is a tool of peacebuilding, acts as a bridge allowing them to access the private sector, especially startups in the growing technology sector, because many refugees possess the technical abilities but lack the networking skills and support to enter this field.

In 2016, the organization joined hands with UNICEF Lebanon to reach out to more youth through an entrepreneurship and seed funding program named GIL, the Generation of Innovation Leaders. Since then, Nawaya has supported nearly 5,000 youth across Lebanon, teaching them how to use their talents and skills to generate an income while serving their community. It is a very ambitious program to address the rising unemployment among Lebanese and refugees. By focusing on design thinking, innovation, creativity and business development, youth come up with innovative micro-enterprises that strengthen their livelihoods. Among the beneficiaries are Syrians and Palestinians, males and females, who escaped from Syria, dreaming of peace and a decent life, and refusing, despite all the odds to surrender to despair and violence.

In Bahriya's (21 years old, Syrian living in Beirut) own words: "If it weren't for Nawaya, I would have just been a stay at home refugee girl". Ola (19 years old Palestinian residing in Saida) turned her painting skills into a peace message about her roots and homeland. Young refugees are trained, based on their individual talents, and turned into entrepreneurs, thus freed from abusive former employees and harsh low income physical labour that ignore their capabilities. Adnan (24 years old Syrian) and Mahmoud (23 years old Syrian) for instance launched a project providing a vulnerable community of around 4000 students among Syrian refugees with fixed second hand laptops at affordable prices.

Empowering Bahriya, Ola, Adnan, Mahmoud and other refugees kept their hope alive; and reaching financial independence at a young age, despite being displaced from their homeland, was in fact an on ground act of peacebuilding and prevention of conflicts because empowered refugees can never be a burden on host communities. However, Nawaya does not claim to have all the answers, thus it seeks the help of established professionals in several fields who would volunteer to mentor these youth.

GIL is not a random acronym as the word stands for Generation in Arabic, and is meant to empower a new "generation" of Lebanese and refugees. In May 2019, GIL organized an inspirational event entitled Hakaya GIL (generation's stories) where nine young people, including one from Yemen, told others how they overcame their life obstacles and were able with the help of the program, to launch projects that enabled them to fulfil their dreams and help others at the same time.

Another project is SE (Software Engeneering) Factory that Nawaya launched with another organization, out of their belief in working together and sharing expertise. It is a coding bootcamp that develops the technical and soft skills of youth from various socio-economic backgrounds across Lebanon. Via in class and online extensive courses, SE Factory makes underprivileged and low-income youths more employable, filling the big demand locally and regionally, and turning Lebanon into a hub for tech talent. So far, 90% of SE Factory graduates have become employed as the tech industry in Lebanon is still calling out for applicants.

Being nonprofit, SE Factory only charges a symbolic fee of $100 per student, giving equal opportunity to people from different backgrounds, another element that differentiates it from traditional coding bootcamps that cost thousands of dollars. SE Factory is also starting a revenue model by charging companies that hire its graduates. Here is the domino effect again. More money for the SE Factory means additional opportunities for ambitious youth that would in turn mentor others.

Nawaya dreams of expending to the Middle East and becoming a network of peacebuilding via economic empowerment among youth and with them. Underprivileged children like Nadeen can turn into designers, athletes, musicians, writers, photographers and filmmakers, working for peace and harmony.

6th Floor, Massabki Serhal Building, Cairo Street, Hamra
Is there an error on this profile? Email hello@peaceinsight.org to let us know.
Latest from Lebanon →