Since gaining independence in 1960, the Central African Republic (CAR) has experienced numerous coups d'état. Its longest period of stable rule occurred between 1965-1979, under the dictator Colonel Jean-Bédel Bokassa, who in 1976 renamed the country the Central African Empire and proclaimed himself emperor. CAR began a democratic transition in the 1990s, with elections being held in 1993 with the help of the international community. Ange-Félix Patassé won these and led the country for the next decade, although his government's popularity steadily fell due to its erratic policies and corruption. He was overthrown in the 2003 coup d'état led by General François Bozizé while Patassé was out of the country. Following this coup, Bozizé suspended the constitution and named a new cabinet including most opposition parties and appointing Abel Goumba, one of the former candidates for president (who had lost against Patassé) as his vice-president. He then set a National Transition Council to work developing a new constitution and declared he would step down and run for election once it was approved. He did so and was re-elected in May 2005 in an election excluding Patassé.

In 2004 the Central African Republic Bush War began, which involved a variety of rebel groups, opposed to the rule of Bozizé, taking up arms. The multitude of armed groups which made up the rebellious forces undermined government efforts to implement peace agreements in 2007, and again in 2012. Following the peace accord in 2012, the Séléka group formed. The Séléka – meaning "coalition" in Sango, one of the two official languages in CAR – was composed of many rebel groups, some of which were almost a decade old, as well as others which had formed only months previously, including the Patriots' Convention for Justice and Peace (CPJP), the Union of Democratic Forces for Unity (UFDR), and the Democratic Front of the Central African People (FDPC).

Many of these groups were geographically situated in the marginalised areas of the north and were predominantly Muslim. Adding to this, the forces that made up Séléka also contained many foreign fighters from Chad and Sudan, which are predominantly Muslim countries. These factors have played a part in the identification of the Séléka as a Muslim group, despite its disparate structure and fluid composition. It is believed that the significant mineral wealth of CAR is also responsible for motivating the funding of Séléka forces, as well as the involvement of foreign fighters, similar to the situation in the eastern regions of the Democratic Republic of Congo (DRC). Graph and data provided by ACLED

The grievances of the Séléka, led by Michael Djotodia, were the government's alleged failure to follow through on terms of the 2007 peace deal. However, a ceasefire was brokered between the Séléka and the government of CAR, with the aid of Chad, in 2013. This deal also fell through, and the Séléka resumed their fight against the government, seizing Bangui in March 2013 and forcing Bozizé into exile. However, fighting continued between Séléka forces and supporters of Bozizé, with the worst of the violence occurring in September.

At this point, the anti-Balaka forces, which formed as largely Christian village self-defense militias in the 1990s, became involved in the fight against the Séléka, blurring the lines between supporters of Bozizé, such as the former armed forces, and the anti-Balaka. Self-styled spokesman for the group, Sebastien Wenezoui, has stated that the anti-Balaka are fighting to defend Christians against Muslims, and many of the anti-Balaka recruits continue to be drawn from Christian and animist communities. This has since bolstered the religious dimension to the fighting which has expanded dramatically since 2013, but had not been strongly emphasized before then.

By late 2013 to early 2014, violence had reached unprecedented levels and the potential for a genocide was recognised by the international community, leading to the deployment by France of Operation Sangaris, the AU's MISCA, and the UN force MINUSCA to try and bring the violence under control. Since 2014 however, hundreds of thousands of Muslims have been forced to flee their homes, with many of them now living as refugees in Cameroon and the DRC. 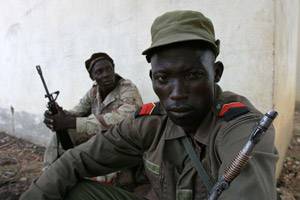