X
Please note that information on this pages relates to peacebuilding groups in India-administered parts of Jammu and Kashmir. For peacebuilding groups based in Pakistan-administered parts of Baltistan and Kashmir, please see the Pakistan section of our site. Peace Direct, the publisher of this site, takes no position on the differing territorial claims in this region and instead publishes this information to draw attention to the work of peacebuilding organisations.

Born from the partition of India in 1947, the conflict in Kashmir continues today, involving three nuclear powers - China, India and Pakistan - who are in dispute over the territory. The conflict is set against the backdrop of the Himalayan mountains and valleys and involves a patchwork of languages, religions and ethnicities: notably Kasmiris, Dards, Ladakhis, Dogras, Hanjis, Gujjars and Bakarwals.

The dispute over the region has continued for more than six decades, at huge cost. Since the 1989 insurgency – 42 years after the partition – there are estimated to be at least 70,000 dead and 8,000 missing by local human rights group CCS. Today Kashmiris face life alongside a huge military presence and ongoing militia operations. Although a ceasefire agreement was made between India and Pakistan in 2003, and the 2000s saw internal violence largely give way to non-violent protest, the calm is often punctuated by military and insurgent operations from both sides.

Since the 2008 Mumbai attacks by Pakistani militants, there have been numerous violent incidents between India and Pakistan along the border, leading to a statement by the Indian defence minister A.K. Anthony that there has been an 80% increase in ceasefire violations compared to the same period last year by Pakistan, pushing the likelihood of successful peace talks even further away.

As of 2013, India administers 43 per cent of the region - including most of Jammu, the Kashmir Valley, Ladakh and the Siachen Glacier. Pakistan controls 37 per cent of Kashmir, namely Azad Kashmir and the northern areas of Gilgit and Baltistan. In addition, China occupies 20 per cent of Kashmir following the Sino-Indian War of 1962. The Shaksam Valley, which China claims, is part of Tibet.

Amidst the tumult of independence the Hindu ruler Maharaja Hari Singh of Kashmir signed the Standstill Agreement with Pakistan. The Maharaja delayed his decision to accede to either India or Pakistan in an effort to remain independent, but was forced to choose when internal revolt in the Poonch region turned into an organised rebellion of the majority Muslim population. Mass killings of Hindus, Sikhs and Muslims throughout the year led to hundreds of thousands of refugees fleeing their homes where they were in the religious minority, and culminated in Pathan tribesmen and the Poonch rebels invading Kashmir, killing large numbers in Baramula.

Even though Kashmir had a large Muslim majority, the Maharaja eventually signed the Instrument of Accession putting Jammu and Kashmir under Indian control, allowing India to send in forces to repel the Pakistani presence and kick-start the war. This move was, as suggested and accepted by India, supposed to be temporary until a plebiscite could be conducted which would enable the Kashmiri people to choose who would rule them, though this has never materialised.

The war continued until 1948 when India requested the involvement of the UN Security Council. The Council passed a resolution that imposed an immediate ceasefire and called on Pakistan to withdraw all military presence. In addition, it stated that India could retain a minimum military presence, while Pakistan would have no say in administration and “the final disposition of the State of Jammu and Kashmir will be made in accordance with the will of the people expressed through the democratic method of a free and impartial plebiscite conducted under the auspices of the United Nations.” The ceasefire was enacted on 31 December 1948, however Pakistan did not withdraw its troops from the region and a plebiscite was not conducted, leading to the beginning of increasing unrest in the region.

The increasing unrest and escalating violence culminated in 1962 when military from China and India clashed in territorial disputes. China quickly overpowered the Indian military and occupied the area, claiming the area under administration and naming the region Aksai Chin. The border dispute between this area and other smaller areas is known as the Line of Actual Control.

In 1965 and 1971, heavy fighting broke out again between India and Pakistan. The Indo-Pakistani War of 1971 resulted in the defeat of Pakistan and the surrender of the Pakistani military in East Pakistan (now Bangladesh), which led to the signing of The Simla Agreement between India and Pakistan. By this treaty, both countries agreed to settle all issues by peaceful means and mutual discussions within the framework of the UN Charter. However, this form of track-two diplomacy was merely a ‘paper peace’ and did not reflect the situation in Kashmir that had left a bitter legacy of a deadly 20-year war.

The Simla Agreement had little bearing to events on the ground and there were increasingly organised uprisings. Opposition to the Indian administration, disputed state elections and military occupation led to some of the state’s legislative assemblies forming militant wings, which further created the catalyst for the Mujahideen insurgency, which continues to this day.

The three main militant groups in Kashmir are Hizbul Mujahideen; Lashkar-e-Toyeba; and Harkat-ul-Mujahideen. All have to some degree fractured into different, sometimes opposing factions, many of which have different objectives, views on how to resolve the conflict, and opinions on the use of violence. In recent years their membership and influence has diminished. A fourth militant group, the Jammu and Kashmir Liberation Front, a secular and nationalist group, has sought full independence for Kashmir from both India and Pakistan, and increasingly found its support reduced over the past few decades. Image from mfr_isb@yahoo.com, under a creative commons license

In mid-1999 insurgents and Pakistani soldiers from Pakistani Kashmir infiltrated Jammu and Kashmir. The insurgents took advantage of the severe winter conditions and occupied vacant mountain peaks of the Kargil range. By blocking the highway, they wanted to cut off the only link between the Kashmir Valley and Ladakh. This resulted in a high-scale conflict between the Indian Army and the Pakistan Army. International fears that the conflict could turn nuclear led to the involvement of the United States pressurising Pakistan to retreat.

The main opinions of India, Pakistan, and Kashmiris can be summarised as follows: Image from mfr_isb@yahoo.com, published under a creative commons license

One of the first peace initiatives, in July 2000, laid a tentative framework for reconciliation. The largest militia group, the Hizb’ul–Mujahideen, declared a unilateral ceasefire against the Indian forces after covert negotiations between the different stakeholders. However the demands from the militia group, which included India declaring Kashmir a disputed territory and that tripartite negotiation should begin immediately, were not met and the ceasefire collapsed. In 2003 another ceasefire was declared along the Line of Control which resulted in five-stage talks between the Indian and Pakistani governments, commencing in 2004. Some progress was made, leading to increased trade and movement between the borders. However, the talks once again took a back seat after the 2008 Mumbai attacks, which Pakistan admitted were launched and partly planned from Pakistan. This led to an upsurge in violence. Positive steps towards peace were taken in April 2012 when Prime Minister Manmohan Singh and President Asif Ali Zardari held the first high-level talks in seven years.

Although this appeared promising for the future of Kashmir, in 2013 the secret hanging by India of the last surviving member of the militant squad responsible for the Mumbai attacks, and the extremely controversial hanging of the Kashmiri, Muhammed Afzal Guru, convicted by India of an attack on its parliament in 2001, led to widespread protest and a violent crackdown by the Kashmiri government. Even though the newly elected Pakistani Prime Minister, Nawaz Sharif, has promised a new era in Pak-Indo relations, India has refused on the grounds that Pakistani militants are still violating the ceasefire on the ground. 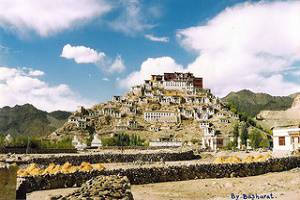