Uganda has suffered intermittent conflict since independence in 1962. In 1967, the first Prime Minister, Dr. Milton Obote, overthrew the country’s first President, Sir Edward Mutesa II and pronounced Uganda a republic. Multiple military coups and violent regimes followed – including that of Idi Amin (1971-1979)– and have since resulted in hundreds of thousands of deaths and the prolonged suffering of Ugandans. 55 years since independence, the country is yet to witness a democratic handover of power from one leader to another.

The most recent coup, in 1986, brought current president Yoweri Museveni to power. His government has faced armed opposition from different groups across the country. Through a hybrid dictatorship and manipulation, Museveni has held a tight grip on the country mantle of power for the last 31 years and counting.

Since the 1990s, Uganda has been engaged in a number of civil wars, the most protracted being a 20 years’ war against Joseph Kony’s Lord’s Resistance Army (LRA) whose aim was to establish a state based on the Ten Commandments. The LRA became notoriously infamous for their abduction of 60,000 children to serve as child soldiers and sex slaves.

A period of stability followed the Juba peace talks from 2006- 2008, but violence soon resumed after a failed military offensive to wipe out the LRA in their hideouts in Garamba leading to its current incursions in Central African Republic and parts of Democratic Republic of Congo.

In 2005, the top five LRA leaders were indicted for war crimes and crimes against humanity. As of 2017, only one junior commander, Dominic Ongwen, is facing trial at the International Criminal Court. However, Kony remains at large. The US-backed African Union Regional Task Force has pushed the group back, announcing its mission’s completion in May 2017. However, some analysts claim that active splinters in CAR point to the potential of resurgence.

Despite earlier commitments to democracy and human rights, Museveni also abolished his term limit. His multiple re-elections have been marred with accusations of electoral fraud and violence. In 2016, his opponent, Dr Kizza Besigye, and his supporters were violently harassed by security forces, acting with seeming impunity. As of September 2017, Museveni embarked on a forceful move in Parliament to amend article 102 (b) of the Constitution to remove term limits on the Ugandan presidency and pave the way for serving for life.

One million Sudanese refugees have also fled to Uganda from the civil war, putting further pressure on Ugandan state and society. 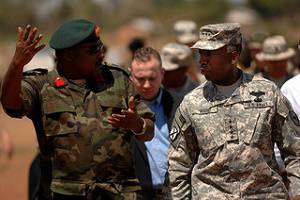