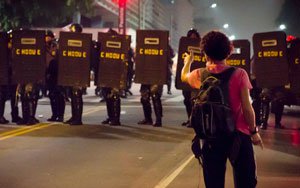 The map shows the work of 37 peacebuilding organisations, working on 408 projects, addressing themes such as DDR and conflict prevention, and reaching over 3 million beneficiaries.

Peace Direct has surveyed local peacebuilding organisations in Burundi to get a picture of the extensive work of local people to consolidate peace. This information is viewable in a unique interactive map searchable across provinces and thematic areas.

The conversation about gender and peacebuilding is actually about inclusion and participation: social, cultural, economic, and political. We cannot talk about including women in peacemaking, peacekeeping, and peacebuilding without being attentive to where this leaves men.

Women, men, and peace is the third issue of Building Peace. The collection of articles examines the ideas of gender and peace through the first-hand experiences of peacebuilders - both men and women - around the world.

Helping the Syrians help themselves? The ambiguities of international assistance to the rebellion

The international community has tended to portray civilians as largely defenceless victims, when at least anecdotal evidence suggests that civilian resilience has been significant.

Helping the Syrians help themselves, by Frédéric Mégret in Stability Journal, asks what is the reality of civil resistance in Syria. The paper argues that civilians in Syria have had much greater agency than they are often portrayed, and this raises important questions about what civilian protection means in Syria.

Creating an enabling peacebuilding environment: How can external actors contribute to resilience?

Despite its impressive growth, Countering Violent Extremism (CVE) has struggled to establish a clear and compelling definition as a field; has evolved into a catch-all category that lacks precision and focus; reflects problematic assumptions about the conditions that promote violent extremism; and has not been able to draw clear boundaries that distinguish CVE programs from those of other, well-established fields.

Insights is a new regular publication from USIP that looks at the theory and practice of peacebuilding. The first issue looks at the field of countering violent extremism. Articles include an introduction to the concept, and examples of practice in Pakistan and Nigeria.

Failing to deal with the past: what cost to Lebanon?

Nevertheless, the relentless effort of families of the missing and disappeared, and an increasing number of NGO supporters, have broken the official silence. Following pressure from civil society, the Lebanese government has had to respond to requests to uncover the fate of the missing and forcibly disappeared.

Failing to deal with the past, from International Center for Transitional Justice, examines the failure of Lebanon to adequately deal with crimes committed during conflict, and the continuing culture of impunity and unaccountability. The study also contains examples of the work local organisations have been doing to change this.

By Insight on Conflict: Peace Direct has created a unique interactive map displaying the extensive work of local people to consolidate peace in Burundi. Read more »

By Ruairi Nolan: This has been a dramatic week for peace and human rights activists in Sri Lanka with arrests of prominent human rights campaigners. Read more »

Peacebuilding and human rights – an agenda for democratic transformation

Bosnia and Herzegovina: Acknowledging the crimes of the past

By Dr Goran Šimić: Acknowledging the crimes of the past is a difficult but vital step to build lasting peace, says Goran Simic Read more »

By Supreet Kaur: Taking account of environmental factors should be crucial to peacebuilding. Read more »

Borders of war: the impact of South Ossetia’s new border